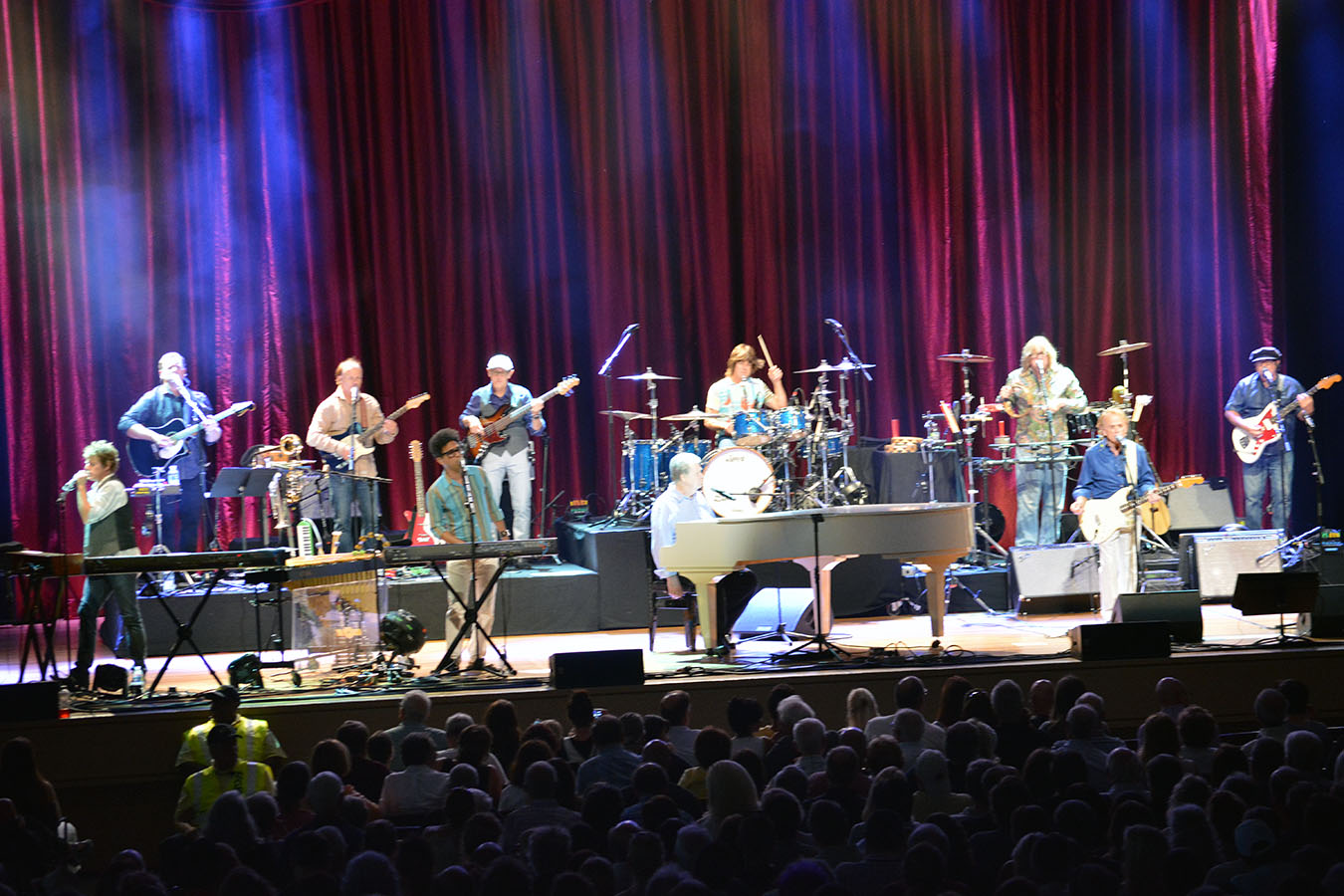 Sixto Rodriguez, born in Detroit, Michigan, is a Mexican-American folk musician. Most of his songs reflect the cruelties facing the inner city poor and his song style earned him a record contract with Sussex Records. After low album sales and mixed reviews, he was dropped from the record label and retired from the music business. However, during the mid-seventies, his albums were gaining airplay in South Africa and Australia. Unbeknownst to him, his songs and albums were very popular in South Africa as some of his songs became anthems for anti-Apartheid.

Rodriguez played an all acoustic half hour set Monday at Ravinia. Most of the songs that he played were from his first album “Cold Fact” released in 1970. He did a nice cover of Little Willie John’s “Fever” and ended his set with “Nice ‘N’ Easy”. If you have not seen the 2012 documentary film “Searching for Sugar Man”, and enjoyed his music, this is a must see film.

7/6: Brian Wilson and His Band

What can I say about Brian Wilson that has not been said before? Musician, singer, songwriter, and record producer who wrote or co-wrote more than two dozen Top 40 hits for The Beach Boys. I am glad that after recently celebrating the 50 year reunion with the Beach Boys, that he is still making music and touring. Brian is touring in support of of his current album “No Pier Pressure” with special guests Al Jardine and Blondie Chaplin.

Brian started his show with several Beach Boy songs: “Our Prayer”, “Heroes and Villains” and “California Girls”. Al Jardine took the vocals on “Shut Down” and then went into some more Beach Boys hits: “Little Deuce Coupe”, “I Get Around”, This Whole World” (with Darian Sahanaja on vocals) and “Girl Don’t Tell Me”.

Brian and the band had a false start for “Honeycomb”, a song they just learned for this set. Brian joked, “I blew the first verse. Let’s do it again because we just learned this song. No, let’s just continue with the show”. Al Jardine then sang The Crystals song, “Then He Kissed Me” as “Then I Kissed Her” and then went into “California Saga: California”. Brian and his band performed more Beach Boys songs before going into “One Kind of Love”, which Brian dedicated to his wife, from the new album “No Pier Pressure“.

Blondie Chaplin, formerly of The Beach Boys, The Rolling Stones, as well as other bands, took the vocal leads on “Sail Away”, “Wild Honey” and “Sail On, Sailor”. Al Jardine then sang the lead on “Wake the World”. Brian always makes his shows fun as he did an audience sing-a-long of  “Row, Row, Row Your Boat”. Brian then joked, “I don’t like singing this next song, but we have to do it” and then played “Busy Doin’ Nothin’”. The band then played “Surf’s Up” before going into another song from the new album, “The Right Time”. Matt Jardine took the lead vocals on “Wouldn’t It Be Nice” as he did for “Don’t Worry Baby” earlier in the set. Brian then finished the set with “God Only Knows” (Brian says it’s Paul McaCartney’s favorite song) and “Good Vibrations”.

Brian performed a marathon of Beach Boys songs for the encore: “All Summer Long”, “Help Me, Rhonda”, “Barbara Ann”, “Surfin’ U.S.A.” and “Fun, Fun, Fun”. He ended the show with “Love and Mercy” which is the title of his biographical film which was just released last month. This was a great show at Ravinia with Brian and his band playing thirty four songs in their hour and a half show.

For more about Brian Wilson, check out his website.