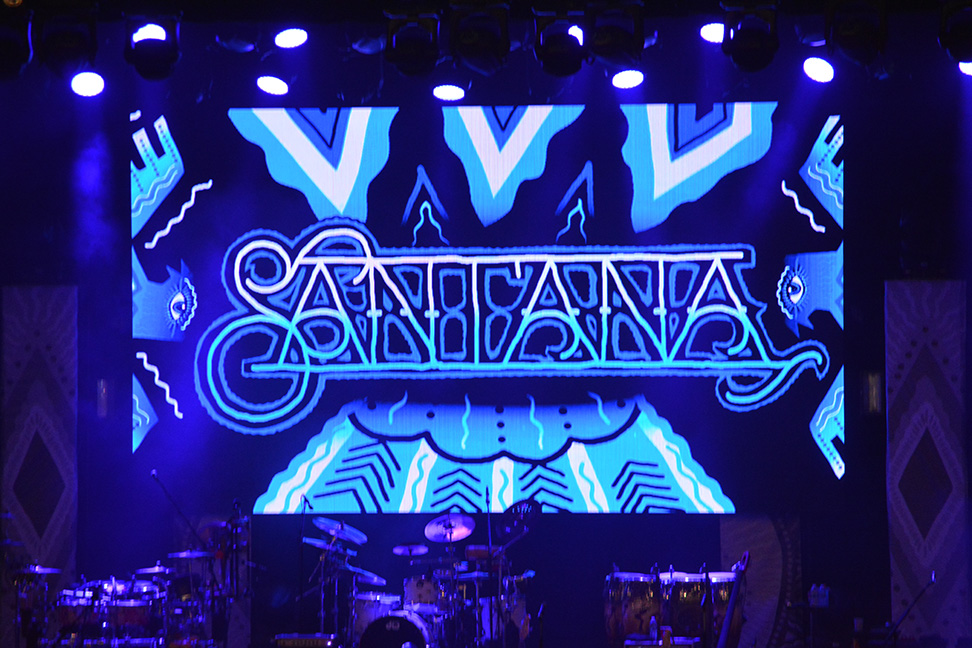 The show opened with footage of Santana’s band performing at the Woodstock festival, which was forty six years ago this month. The band that was on stage tonight was just as good as the one that played at Woodstock. Similar to the Woodstock band, the current band has “a wall” of percussionists which contributed to the energetic and polyrhthmic atmosphere of the evening.

The band started the show with “Soul Sacrifice” and kept the energy going with “Saideira” and “Love Makes the World Go ‘Round.” “Freedom in Your Mind,” “Maria Maria,” and “Foo Foo” turned the pavilion into a giant dance party with the Latin funk and African rhythmic grooves from those songs. The only mellow part of the show was “Europa (Earth’s Cry, Heaven’s Smile)” where Santana shined on this instrumental from the album “Amigos.”

Santana then allowed his son, Salvador to take over the show with a three song set of his material from his upcoming album “Fantasy Reality.” With Alex Nester contributing on vocals, Salvador’s songs recieved a nice reception from the younger audience members.

The show continued with Santana’s cover versions of “Jin-go-lo-ba,” “Evil Ways,” “A Love Supreme,” “A Place With No Name” and “Tequila” with contained a short snippet of “Get Ready.” Carlos acknowledged that when he is in Chicago, he has to play the Blues. He played “Chill Out” which is a song that he co-wrote with John Lee Hooker. He finished the set with the hit “Smooth” a song that we wrote with Rob Thomas.

As Carlos said earlier during the show, “We want to make this the most memorable night ever!” He kept that promise with his blend of rock, jazz, blues, Latin and African rhythmic music that evening.

For more info on Santana, the tour and albums, click here.