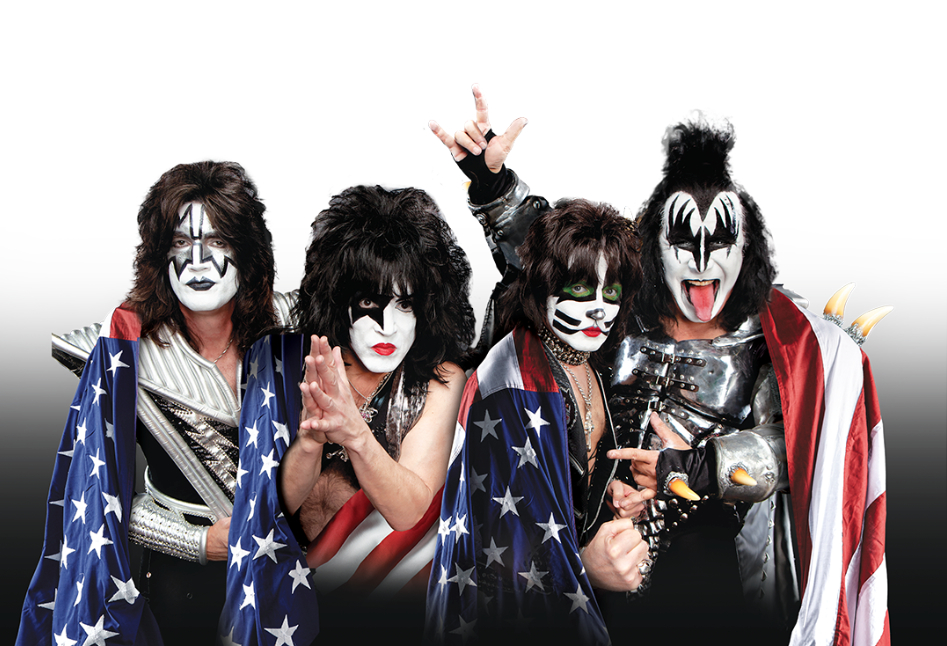 KISS is currently on tour this year with the “Freedom To Rock” tour. They’ve got a new live DVD coming out soon called, “KISS Rocks Vegas” soon as well. Lead guitarist, singer songwriter, producer, editor and current Space Man – Tommy Thayer – has a lot on his plate but still entertains thousands of fans daily on the road with KISS.

In The Loop Magazines writer, Christopher David caught up with the masked man and talked all about his amazing life on the road and behinds the scenes.

Christopher David (In the Loop Magazine): There’s a lot going on with KISS this year, and the ‘Freedom to Rock’ tour is well underway! How have things been going this time around?

Tommy Thayer: The tour’s going really well, and the interesting thing is all the new people coming to see us, younger kids, new recruits to the KISS Army! Every night onstage Paul asks how many people have never seen KISS before, and it’s amazing how many people raise their hands.   It’s inspiring, honestly, because any band that’s been around a long time, you have to constantly attract new fans, and we’re doing that, so it’s an inspiring and gratifying thing to see.

ITLM: That’s great to hear. It’s interesting, too, because there aren’t a lot of bands now that have been around for as long as you guys, and it seems to be a bit unique to KISS, that you’re clearly bringing in a lot of new fans and pushing forward a lot more actively than many of the ‘older’ rock bands. From a fan’s perspective, that seems to be the case.

TT: I think that’s true, and I think part of the reason is the wide demographic. At our shows, it’s a wide demographic of age, from the youngest to the oldest and everyone in between, and that’s also great in terms of the life of the band. There’s not just a certain window of ages or a certain age group, and I think one things that adds to it is that people bring their friends, fathers bringing their kids, you know, and it’s this whole generational passing of the torch kind of thing. You see teenagers, you see everybody – I think that really adds to the surge of new fans.

ITLM: What’s cool about that is that you bring up word of mouth being one of the attracting factors – and ultimately, that’s how KISS became big in the first place, word of mouth, people talking about the band.

TT: Totally! That’s what it’s about. These days, it’s definitely a different world, and attracting new fans and that sort of thing, it’s a different approach. It’s not like making a new record, promoting the record, going to radio – those conventional types of outreach aren’t there anymore, and you have to think of new ways to get the band in front of the people. Touring is a big part of that, obviously, and other projects that we do, outside-of-the-box projects, they lend to that as well.

ITLM: Yes, and in talking to different bands—new bands, established artists—it does seem to be a bit of the ‘wild west’ right now, like the reset button got hit on the music industry and everyone’s trying to figure out the best approach.

TT: Yeah, and it can be tough. I was actually misquoted recently, that I said that ‘making new records was a waste of time.’ That wasn’t the sentiment of what I said at all, I was saying that it was more of a challenge to do a record, and then not selling records, that makes it difficult, but I applaud new groups that are out there making records, other groups making new music and getting it out there and I’m all for it.   That’s the only way that things are ever going to move forward. I don’t think it’s out of the question that we’ll do another record at some point, but it’s not something we’re going to do every year or anything.

ITLM: The role of the ‘album,’ that piece of the process, has really changed, regardless of where a band is. It used to be a regimented process—album, single, radio, tour—a cycle that was just perpetuated, and you’re right that a record doesn’t really figure in to the overall scheme in the way that it once did.

TT: Right, this is a day and age when kids pack arenas watching gamers. You have to adapt, because it’s not a conventional path anymore.

ITLM: You mentioned the ‘rite of passage’ as parents introduce their kids to KISS, families, friends. That’s how I became a fan back in the ‘70s, my parents were into KISS from day one. Who were some of the bands that really hooked you when you were young and led you to where you ended up with a career in rock?

TT: Well, you know, when you’re thirteen or fourteen, that’s a very impressionable time, and that’s when you really attach yourself to a certain type of music. When I was that age, it was the early ‘70s, and to me, that was a golden age of hard rock, though it was kinda second generation, because you had that first wave of the more blues-based rockers in the ’60s like Cream and Led Zeppelin. By the time I was there, it was more Deep Purple and Black Sabbath, even KISS, Aerosmith. And then a little bit later, one of your hometown’s finest – Cheap Trick.

TT: One of the greatest bands of all time. I’m a huge fan of Cheap Trick. All those great early to mid-70s hard rock bands had a huge impression on me.

ITLM: That really was a golden era of defining music. I wonder if we’ll ever see a time period like that again that sets the tone so much for what comes after it.

TT: It’s all in the eyes of the beholder, you know, it’s subjective. If you asked Paul and Gene, they’d tell you it was the mid-to-late 60s, so I think it depends on how old you are, it’s all generational. You meet other KISS fans, and they’re like, ‘oh, man, when I grew up it was (1992’s) Revenge’ or something like that. That’s when they grew up, and they were discovering music and girls and learning to play guitar. It really depends on how old you were when you were enlightened!

ITLM: I’ve seen the light—and it was the KISS logo, onstage! So you’re doing a really cool thing on this tour – many KISS fans already know how extensive your work has been with veterans and how dedicated to charity you are as a band, so tell us a little about the “Hiring Our Heroes” program and how it got started.

TT: Well, first off, it’s very genuine, it’s not just a shtick or something, it really comes from the heart.   I grew up in a military family – my father is a retired Brigadier General in the Army, and Paul, Gene, and Eric are all true supporters of our veterans and their care, and we’ve done different types of things before on tours where we’ve donated so much per ticket to things like Wounded Warriors, and now we’re doing this Hiring Our Heroes program so that we can bring awareness to veterans coming back from overseas in need of jobs and giving people opportunities to work. At the end of our show, we honor the veterans onstage, and we’re doing “The Star-Spangled Banner” again, and it really gets everyone fired up.

ITLM: It’s been very cool to watch the veterans work with you backstage and as roadies over the course of the tour so far! (Note: videos and info on HOH can be found at www.kissonline.com.)

With regard to the tour, at this point in your life as a band, how do you go about putting together a setlist for a tour, especially when you’re not supporting a specific record?

TT: Coming up with a setlist is always a bit of a challenge, because different fans have different perspectives on what they want to hear. We really want to cover the classics because most of the people want to hear those, and then you have some diehard fans who’ve been around for years who want to hear some deep cuts from Dressed to Kill or something, and you want to try to keep everyone happy to a certain degree. At the end of the day, we follow our own instincts, and I think a big factor for us is the dynamic of the show – you want to keep it exciting, so there are certain songs or certain orders that keep the shows exciting.

ITLM: I have to say that my jaw dropped when I saw that you guys had recently added “Flaming Youth” (from 1976’s Destroyer) to the show.

TT: Yeah, “Flaming Youth” is a song that hasn’t been performed live much at all, and a good example of a cool song and a great singalong that we wanted to throw in there to spice things up a little bit!

ITLM: Before we go, what can you tell us about this KISS Rocks Vegas package you have coming out this month?

TT: KISS Rocks Vegas will be out on DVD and Blu-ray, and I produced it, actually! There are different packages available, there’s a deluxe package that has a 60-page hardboard book, vinyl. True KISS fans will really want to check it out!