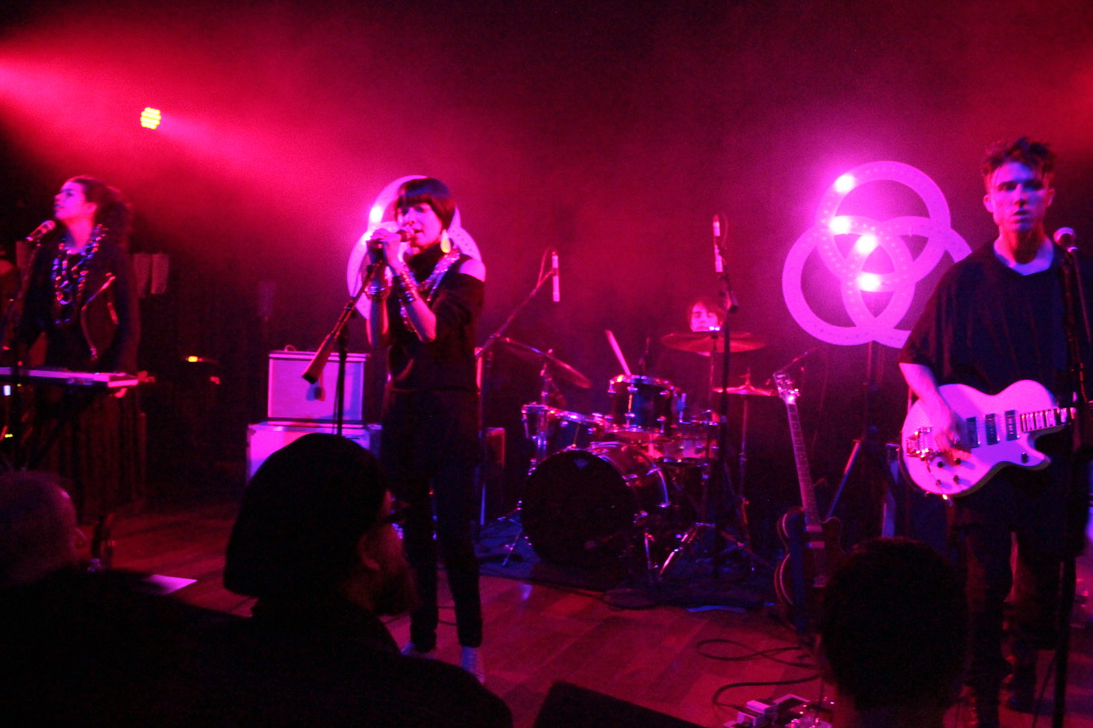 School of Seven Bells or SVIIB for short, was an incredibly underrated band from New York City.  It was a project from former Secret Machines guitarist, singer/songwriter, Benjamin Curtis and the Deheza sisters.  Curtis was also the drummer for 90’s indie alt-rock band Tripping Daisy. Joining him on this new venture was identical twin sisters Alejandra and Claudia Deheza both formerly of On!Air!Library!

I had been a fan of Curtis since his early days (about 2001) with his brother Brandon Curtis and Josh Garza in the group, Secret Machines.  A hard hitting, alternative prog rock band from Dallas, Texas.  Another unique, totally underrated band.  They recorded their first EP, September 000,  here in Chicago.  Just six weeks after forming in 2000.  Hearing them on college radio and seeing them shortly after on JBTV in Chicago, I knew this was a band of talented musicians I wanted to follow.  I was lucky enough to have caught them at the Metro and Lollapalooza in the short time they toured.

Benjamin Curtis left Secret Machines in 2007. Sighting creative differences with his brother and Garza. He was looking for something more.  Something new.  He met the Deheza sisters at an Interpol show in NYC and a few months later, School of Seven Bells was created.

SVIIB originally formed in 2007 and quickly released the singles “Face to Face on High Places”, “My Cabal” and “Silent Grips” the same year.  They just seemed to gel quick. The writing continued and the first album, Alpinisms the following year in 2008.  By 2010 they released the follow up sophomore album, Disconnect From Desire, in 2010 and their final album, minus Claudia, Ghoststory in 2012.

SVIIB tour Chicago three times in their existence.  Once opening for M83 at The Bottom Lounge.  This was their last and final show in Chicago and was held at Lincoln Hall on April 28th, 2012.  Sadly, a little over a year later, Curtis died from T-cell lymphomas at just 35 years old.

So what was their sound?  What influenced them to make music this way.  Something completely different than other projects and bands they had been in before.  The music was a mesh of Indie Dream Pop Shoegaze with a touch of Electronic. In an interview Curtis gave “Feed Me With Your Kiss” in 2012, Curtis describe their sound and influence as, “Everything from Kraftwerk, Wire, Beyonce, New Order, Blonde Redhead, to Section 25 comes to mind, along with singers like Joni Mitchell and Robert Wyatt.  We’re huge fans of pop, too, mainly because we’re huge fans of smart songwriting.”  He was also asked, “When all is said and done, what do you want the legacy of SVIIB to be? What do you want to leave behind?  Curtis replied, “I’d like to think we’re defining our own space, that we’re filling in a lot of cracks in between genres and moods that people didn’t know were there, and I wanna keep pushing that and stretching that until the space is just massive.  We’re really passionate about what we do, and I think that comes through in our music, and every time somebody hears that and makes the connection with us I feel like we’ve done our jobs well.  Celebrity still doesn’t motivate me in the slightest.  I see some people I know chasing after a piece of that pie, which is fine for them, but for me I’d just like to sit back when I can’t do this any more and know that everything I’ve done, I’ve done with creative integrity, and that I’ve given back to music even a fraction of what it’s given to me.”

School of Seven Bells was on to something.  They had a new sound that was just getting noticed.  We can only image what they would have come up with today. One thing is for sure, the music they did make during their short time, was real, honest and from the heart.  Something that’s so hard to find today in mainstream pop music.  It’s a shame we were cut off so short of this teams work.  It’s not know what will happen with the surviving members.  There have been post of Facebook from Alejandra collaborating with guest musicians in making new music, but it’s unclear if it will be new SVIIB or something new.

This final show from SVIIB featured Benjamin Curtis on Guitar, Alejandra Deheza on Lead Vocals and Guitar, Allie Alvarado on keyboards/backing vocals, and Christopher Colley on drums.  They played to a packed, albeit, small house of fans.  This show sold out within a short time.

If you didn’t get to see this band live, I’m sorry, but at least there is this video of the performance to give you an idea of what you missed.  If Curtis had lived, there’s no telling where they would have gone to today, but one things is for sure, he will is missed.  Here’s to hoping Alejandra and Claudia Deheza keep making music in the same vein. Maybe someday we’ll get a new version of School of Seven Bells.