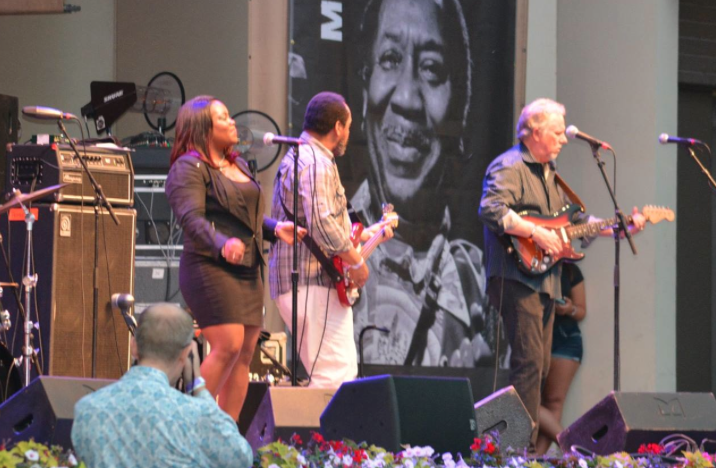 Shemekia, the daughter of late blues guitar legend Johnny Copeland, started singing at Harlem’s famed Cotton Club when she was just eight years old. She is a two-time Grammy® nominee and has played with artists such as the Rolling Stones, B.B. King, Buddy Guy and Eric Clapton. At the 2011 Chicago Blues Festival she was given the honor of the new “Queen of the Blues” by official proclamation of the City of Chicago and the State of Illinois.

I would like liked to see her whole set, but I was covering other stages and missed the first half of her show (if anyone was there and can send me the first half of her setlist, I would greatly appreciate it). A highlight of her set was a song that she dedicated to Koko Taylor called “Has Anybody Seen My Man?” Shemekia was joking with Buddy Guy before she went on stage that he was going to make it rain. But the rain started during her set and the storm caused the power to go out during “Do You Know Where Your Baby Is?”. She still performed as nothing happened when the power came back on after a few minutes.

Setlist:
1. (Missed first half of set due to covering other Fest Stages)
2. Ain’t Gonna Be Your Tattoo
3. (Unknown)
4. Has Anybody Seen My Man? (dedicated to Koko Talyor)
5. Never Going Back to Memphis
6. Stand Up And Testify
7. Ghetto Child (dedicated to her father Johnny Copeland)
9. Band introductions: Arthur Neilson (guitar), Willie Scandlyn (rhythm guitar), Kevin Jenkins (bass) and Robin Gould (drums)
10. Do You Know Where Your Baby Is?