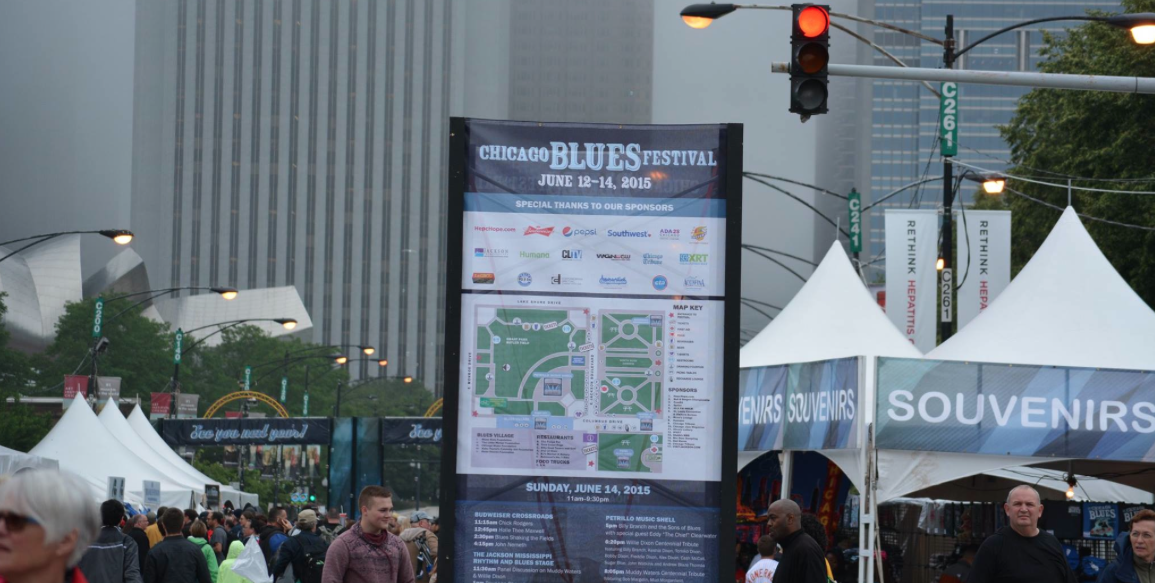 The 32nd annual Chicago Blues Fest started in Grant Park on Friday, June 12, 2015. Even though the morning rain may have made Grant Park grounds “muddy”, that did not stop the diehard blues fans from attending. This year’s Blues Fest is dedicated to Willie Dixon and Muddy Waters who both performed at Chicago’s very first Blues Fest in 1969.

• Members from The House Rockers jammed with other other artists who had played at the Chicago Blues Festival earlier in the day. I was having such a good time jamming with them that I missed half of Shemekia Copeland’s set!

• Also present at the Fest was Little Walter’s Foundation. The Little Walter Foundation is dedicated to ensure that the blues harmonica will remain a key instrument and that the Blues genre will remain vibrant and alive through educational programs, activities and performances that bridge the gap between today’s music listeners and music history. For more information or to support:
https://www.littlewalterfoundation.org

I wondered why there was a long break for the last act of the night – it was a stage change to set up for a large backup band for the closing act, Syl Johnson. This was another Blues Fest treat as I have not seen him play before. Syl, originally from Mississippi, came to Chicago at a young age to sing and play harp for Chicago Blues artists Junior Wells, Magic Slim as well as others. He also recored with Jimmy Reed and has toured with Howlin’ Wolf in the ’60s.

Petrillo Music Shell
8:30-9:30 pm Syl Johnson
He became famous with with his huge hit “Take Me To The River” and his socio-political track “Is It Because I’m Black”. Sly got the crowd dancing with the tunes My Funky Band and Goodie Goodie Good Times. Another highlight of his performance was his tribute to B.B. King by covering “Sweet Sixteen”.

I have seen a lot of Blues artists in my concert going career, but this was a real treat since it was the first time that I got to see Clarence Carter play. Clarence was born blind and taught himself how to play the guitar. He majored in music at Alabama State University and there he learned how to create sheet music in Braille.

One thing that I like about these blues artists is that they tell stories to introduce the songs that they are going to play. One favorite story was that Clarence was chatting with this woman at a concert and she said, “It’s nice to meet you Ray Charles.” Clarence then said that when he started learning how to play Ray Charles’ songs and then played “What I’d Say”. Clarence’s other story was about his music and former wives. He said, “My song Patches made me a million dollars. But one of my ex-wives got the money. My song Slip Away made me another million dollars. But another one of my ex-wives got the money. This next song made me two million dollars, but I got to keep the money”! He then played his most popular tune “Strokin’ “. That song got the crowd on its feet and to sing along with him. He ended his set with a reprise of Strokin’.

Zora’s family moved to Chicago from Mississippi when she was seven. She sang gospel at the Greater Harvest Baptist Church and later switched over to R&B when she was older. Zora has collaborated with blues artists such as Willie Dixon, Hubert Sumlin, Sunnyland Slim, Mississippi Heat and Maurice John Vaughn as well as others. Her set was a powerhouse blues performance with the highlights “Til The Fat Lady Sings” from her CD Tore Up From The Floor Up and a tribute to B.B. King with her cover of “The Thrill is Gone”. She ended her set with “Damn Your Eyes” from her 2001 CD Learned My Lesson.

Nick Nixon who was born and raised in Nashville brought his Jefferson Street blues sound to the Chicago Blues Fest. Nick recorded for Chicago’s Chess Records in the 70’s, and is currently reviving the Nashville blues scene today. I was surprised to learn from one of his stories that he was a sometime stage mate of Jimi Hendrix. Nick became friends with Jimi and Billy Cox (Jimi’s Band of Gypsies) in the early ’60s when they toured in Nashville.

Andy T (Talamantez) is the band’s guitarist/bandleader and has played with blues artists Guitar Shorty and Smokey Wilson. Highlights from their show was a cover of Ray Charles’ “I Got A Woman” and “Drink, Drank, Drunk” from their Livin’ It Up CD.

Check Andy T. and the Nick Nixon Band on their website:
https://www.andytband.com

JJ Thames got the crowd grooving with her mix of R&B, Funk, Motown, and Soul at the The Jackson Mississippi Rhythm & Blues Stage. Highlights of her performance were a cover of “Wang Dang Doodle” by Willie Dixon and John Lee Hooker’s “Boom! Boom!”.