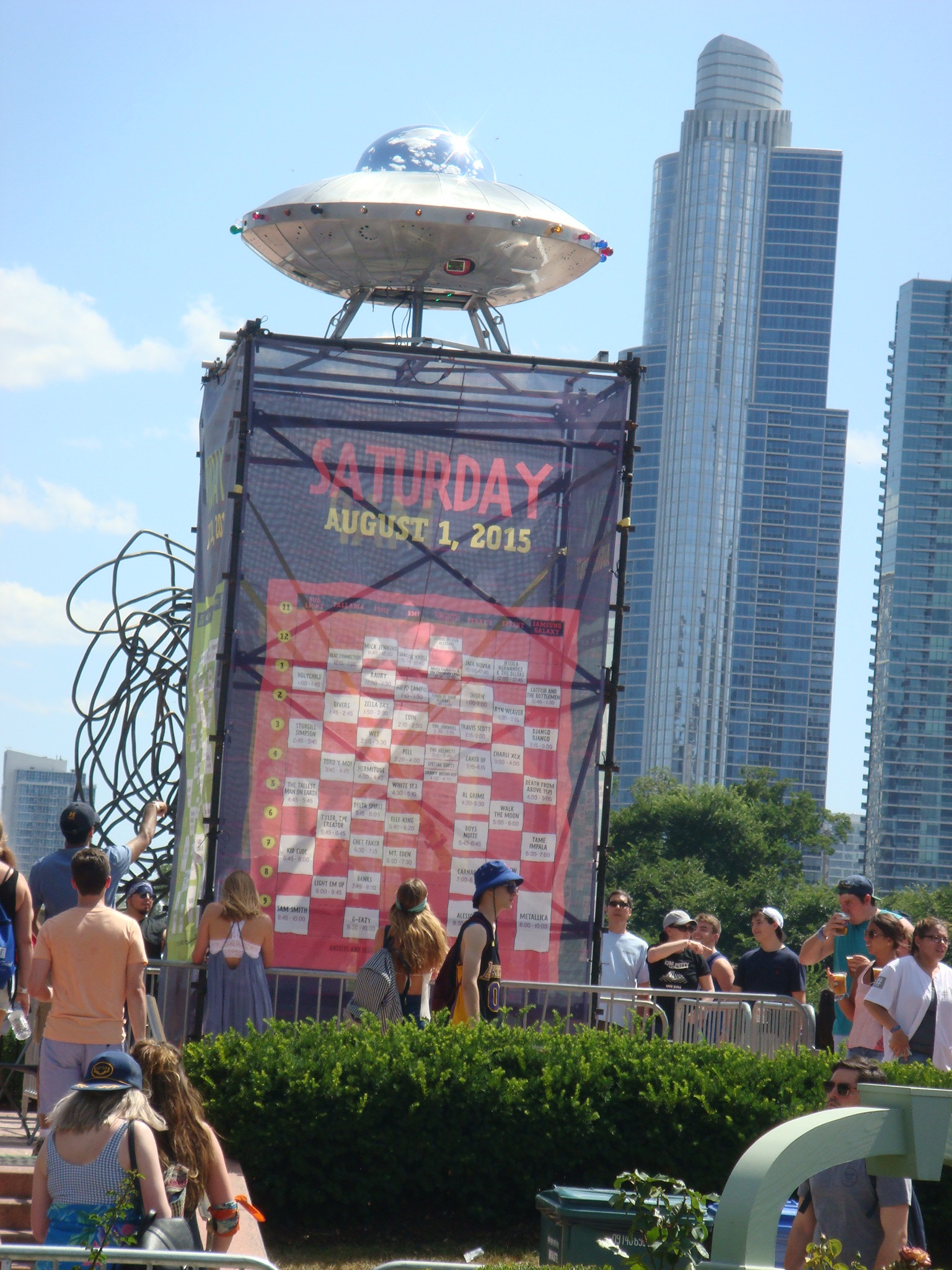 Saturday, August 1, my Lollapalooza 2015 journey continues. Here are the bands that I was able to check out on Saturday.

2:15 – Django Django @ Samsung Galaxy: Django Django’s got their fans jumping and dancing when they played “Shake and Tremble” from their latest album, Born Under Saturn.  The band used a lot of instruments during their set, such as a saxophone, a super-sized tambourine, maracas, and a guiro (a hollow gourd percussion instrument which produces a ratchet-like sound) to help the crowd dance along to their catchy beats and harmonies. Vincent Neff said that this was his second Lollapalooza, as he came to the festival from Ireland when he was 15 years old.

3:00 – Charli XCX @ Sprint: She had the festival’s most interesting greeting, “Fuck you sucker!” when she ran out onto the stage. The crowd was singing along when she sang “Fancy,” a song she wrote for Iggy Azalea. She also gets the best air guitar award for Lollapalooza when she brought out a huge inflatable guitar for “Breaking Up.”

4:30 – White Sea @ BMI: Morgan Kibby, formerly of M83, was so impressed with the turn out at the BMI stage that she said she wanted to marry everyone who was there. Her new band White Sea, an electro-pop five piece band, complemented Morgan’s powerful ethereal voice. The highlight of their set was Kibby’s latest single “Stay Young, Get Stoned”. I will definitely see them again when they return to Chicago.

6:00 – Tame Impala @ Samsung Galaxy: The Australian psychedelic rock band got the crowd grooving by opening with “Let It Happen”. I saw a lot of fans doing Grateful Dead dance grooves to their hit songs “Feels Like We Only Go Backwards” and “Elephant” which were enhanced with Pink Floyd like videos playing on the screens behind the band.  I felt that Tame Impala should have had a larger crowd due to the recent release of their third album, Currents which has been rated as a highly anticipated album for this year.

8:00 – Metallica @ Samsung Galaxy: “You want heavy?” James Hetfield shouted to the Lollapalooza crowd. That what the Metallica fans got when they opened with “Fuel” and “For Whom the Bells Toll.” I was a little distracted at the beginning of their set by the swarm of dragon flies overhead, as it seemed like a drone attack on Grant Park. James also asked, “How many Metallica virgins are here?” “If you don’t know what to do, just look around at the people who have been here before.. and they’ll show you how to have some fun!”

Metallica played songs from their entire catalogue including “Sanitarium,” “One” and “Master of Puppets” as well as performing well-known covers “Whiskey in the Jar” (Thin Lizzy) and “Am I Evil” (Diamond Head). Their encore consisted of their usual finale of “Nothing Else Matters” and “Enter Sandman.” What a way to end another great day at Lollapalooza!