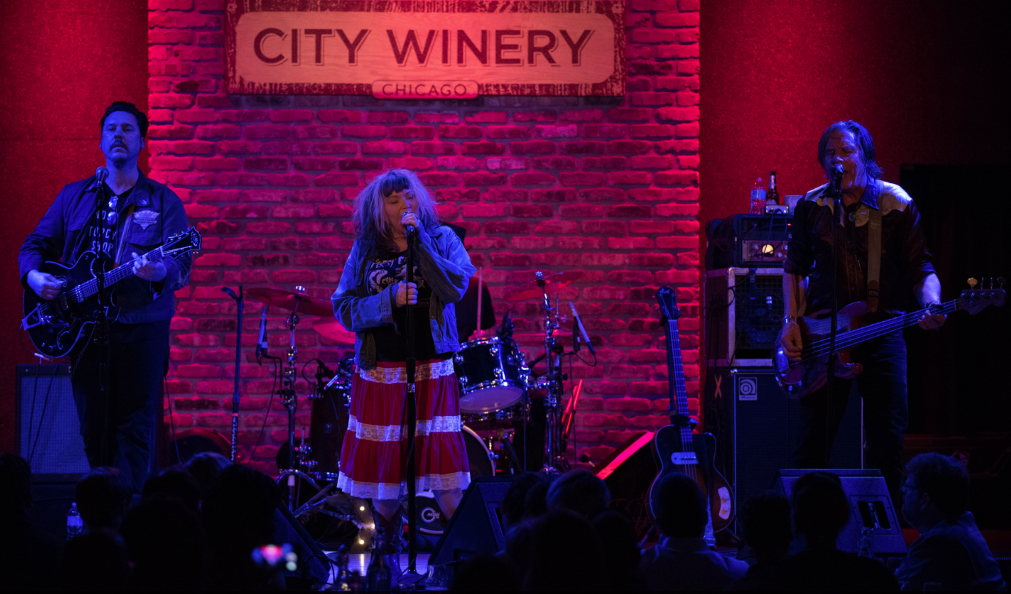 Zoom (an Illinois alum) was diagnosed just weeks earlier with an aggressive form of bladder cancer. The band took to the road in support of him playing several dates in his home state to not only entertain the rabid fans, but also raise support and funds for Zoom’s mounting health care.

Tuesday night was the final night of the bands stay. X was introduced by 93XRT radio DJ, Johnny Mars, who also introduced everyone to a special bottle of wine that proceed from its sale go to Zoom.

Cervenka, Doe and Bonebrake recruited Jesse Dayton to fill in for Zoom on this tour. Dayton, a highly revered guitarist in his own right, brought his “guitar shredding, country infused, Americana sound and paid great tribute to his friend. If you don’t know about Dayton, you should. He’s played and recorded with legends like Waylon Jennings, Ray Price, Willie Nelson and Glen Campbell to name just a few. He has a band called, “Supersuckers” and he also has recorded music for Rob Zombie’s movies The Devil’s Rejects and Halloween 2. He’s also an actor and tours the county playing 150 shows a year. He knows his stuff. Zoom is being represented here very well.

The band started the show off with “Your Phone’s Off The Hook, But Your Not”. The very first track off their first album in 1980 aptly titled, “Los Angeles”. This was followed by, “Sugarlight” also off the same album. They continued with favorites from the second album 1983’s “Gift” and the song, “Beyond and Back” before settling in and mixing with the audience.

Cervenka, bantered with the crowd and Doe throughout the show. At one point with her back to the crowd, someone yelled something and she whipped around and said, “Who said I look like a man!?” in a deep scowl. Prompting an audience chuckle. She pointed to someone in the front and said, “Oh, it was you. I should have known”. This was either a bit, or someone she knew. Either way, the audience enjoyed it and other conversations throughout the night.

Doe and Cevernka harmonized and complimented each other sonically perfect through the songs. It was like they’ve been doing it for years. Which they have minus some time off in the mid 90’s that lasted about a decade. In that time, they also went through some personal differences like the split up and divorce between Cervenka and Doe. None of that seemed to matter this night as the band was on point and on fire.  Doe was sporting a shiny slick shirt that as he put, wasn’t the best choice for the night.  Doe joked, “This shiny shirt is very hot!… bad planning on my part.”

The crowd, normally, a seated audience venue with food and drinks, erupted with dancing throughout the show. Doe, at one point even making light of it and said, “There is dancing allowed folks. I think they’re lined up along that side wall over there.” As he pointed to the ever expanding group of fans jumping around stage left.

X played through the rest of their set before closing the night out with an encore of classics. Doe made comment that Zoom was doing well and he would pass on our support to him.

You can help support Billy Zoom without even attending a show.  The band have started a GoFundMe campaign, click here.

To catch X the band on tour and find out more info about Billy Zoom, click here.