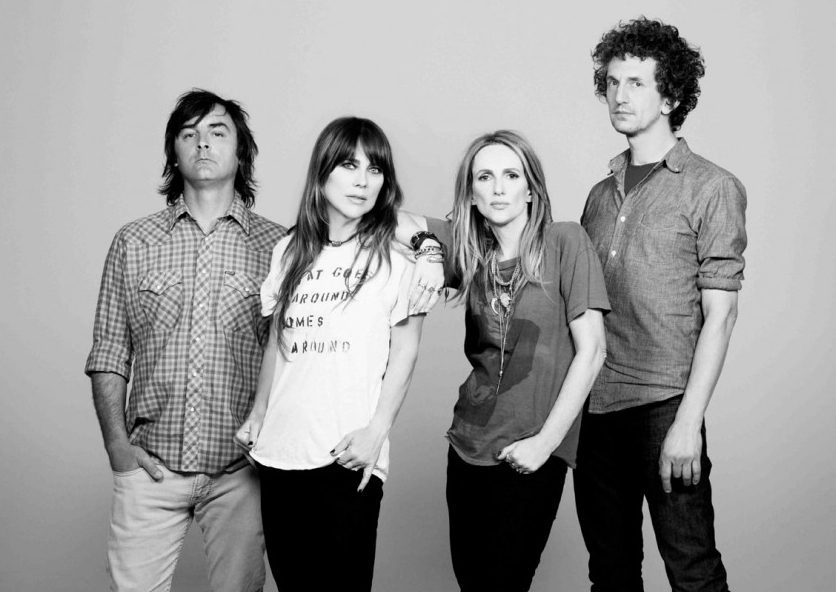 No term was more ubiquitous (and indeed, meaningless) in the 1990s as “alternative rock.” Of course, this is widely acknowledged now by both those who came of age in that decade as well as those who revisit it from a younger distance, but I found myself thinking about this as the side door of Beat Kitchen opened around 11:30 on Saturday night and the members of Veruca Salt made their way through the crowd like boxers on the way to the ring, ready for a title fight. The roar from the packed house was deafening; the crowd apoplectic. As the foursome immediately launched into the explosive slow-burner “Prince of Wales” from new album Ghost Notes, the word “alternative” seemed even sillier: Veruca Salt are, and always were, a rock band, pure and simple. In the best sense of the word.

Veruca Salt’s comeback has been arguably the most rewarding band reunion imaginable from a fan perspective. The band has been highly active on social media and live-streaming site Periscope in the last few months, and their fanbase (loving referred to as “Saltines”) have rewarded them with the kind of devotion that few bands get to enjoy in their career. Soulmate songwriter/guitarists Nina Gordon and Louise Post are obviously having the time of their lives at this point in their career, and bassist Steve Lack and drummer Jim Shapiro have never been tighter. The sixty-minute set offered an adrenalin-charged blast for diehards as well as a perfect primer for the uninitiated, focusing on punchier tunes, from singles “Shutterbug” and “Volcano Girls” to first-album classics “All Hail Me” and “Forsynthia,” which Gordon mused were surely played on the Beat Kitchen stage back in 1993.

Ghost Notes, one of 2015’s best albums so far, fits as seamlessly into the band’s canon as one could imagine, and new tunes like single “Laughing in the Sugar Bowl” and “The Museum of Broken Relationships” hold their own with anything from the band’s past. “Once upon a time, there was a band from Chicago,” Post said with a wicked smile, “and we definitely played this club before. We also played the Empty Bottle.” As the band slithered into the new song of that same name, it was hard, as a longtime fan, not to feel a touch of joyful melancholy as Post and Gordon sang, presumably to each other, reflecting on the burying of hatchets with lines like “I don’t want to bleed if you’re not bleeding with me.”

Opportunities to see “big” bands in small places are few and far between these days, and Saturday’s show at Beat Kitchen will surely go down as one of those “I was there” moments in the Chicago scene as one of the city’s most talented bands made it clear why they deserved the kind of devotion they’re currently experiencing as the Ghost Notes tour gets rolling. Veruca Salt is a rock band, in the best sense of the word. We need them, and every person in attendance on Saturday night, for one feedback and harmony-drenched hour, got a rare opportunity to see exactly why.

Laughing in the Sugar Bowl

The Museum of Broken Relationships

Don’t Make Me Prove It