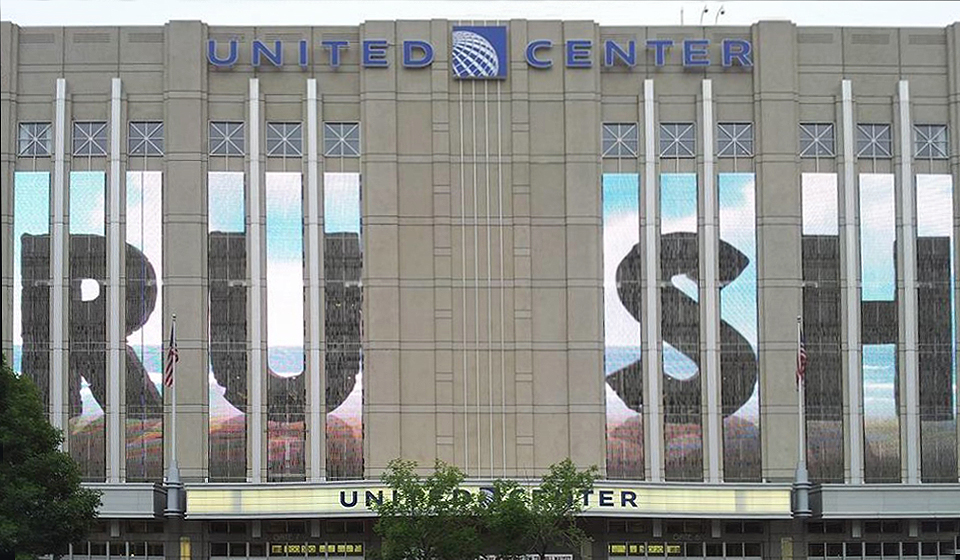 What can you say about a band whose career spans 4 decades and has never fallen victim to the downfalls of critical mass. RUSH is admired by fans world wide and held with to the highest esteem with their peers. Never bowing to latest trends or producing what record labels want. Their 24 Gold and 14 Platinum albums prove that. So what can they possibly do on this tour to support or reflect that? Plenty.

RUSH played Chicago tonight for possibly the last time, at least in this large scale tour format, with the R40 Tour. Heath conditions and family being sited as the major reasons for the end. This tour is celebrating the band’s 40 years together in it’s present lineup (with Neil Peart).

Seeing this tour live, is like seeing RUSH throughout the ages, only in reverse. It’s a time machine of RUSH classics, deep cuts and fan favorites that doesn’t disappoint. It’s a performance that encapsules the bands history, not only of their music, but their life, times and stage acts as well. Once you see it, you’ll get it.

One side note to highlight on this tour is the amazing lighting and effects they use. Sure, they’ve always been a leader of live theatrics, but they really don’t hold back on this one. It’s truly cutting edge lighting and effects, but it’s still RUSH. You’ll see the classic laser lights cut through the fog filled venue yes, but they are just better than before. Crisper. Brighter. Larger scaled. They also include some pyrotechnics, holograms, choreographed dancing columns of light rigs, video screen set designs and so much more. When it’s all put together in the order they do it, it really works. This is a true Rock stadium concert performance in every aspect.

The Setting. A sold out, packed house of RUSH fanatics filled United Center tonight, eagerly awaiting the curtains to drop and when it does, we’re taken for a ride of a lifetime to Cygnus X-1 and back.

Act 1. The R40 logo takes center stage with two large video screens donning each side of the stage. The image subtly changes until the lights go dark and a video plays. The crowd goes wild. “The World Is… The World Is” video plays out then the curtain raises revealing Geddy Lee on Vocals and bass, Alex Lifeson on guitar and Neil Peart behind the drums.

At this point in the show, this is the highest, most elaborate set, lighting, clothing and equipment we see. Clearly showing where the band has come after 40 years touring. It’s pretty much the last stage show from the Clockwork Angels tour. A fan next to me was a little disappointed at first stating, “Hey, that’s the same stage from the last tour! Geez you’d think that they’d have updated it a little since then.” She went on to say, “I’ve been coming to RUSH concerts for as long as I can remember. They always do something different.” I just smiled, nodded and said, “Hold on, I think you’re in for a surprise”.

They continued playing tracks from Snakes and Arrows, “Far Cry” and “Monkey Business”. They continued to move down memory lane with hits from Vapor Trails, Counterparts, Roll The Bones (complete with an all star, celebrity studded “rap track” video to “Roll The Bones”) followed by tracks from Presto and Power Windows.

During the bands performance, there were stagehand actors rearranging the set and equipment to match the era they were performing from. While your watching RUSH play the hits in reverse, you see the set morph and mimic to the time period from which it came from. These men, in red jumpsuits with the R40 logo on the back (reminiscent of the Moving Pictures moving men), brought out ladders and new props the entire show.

About one hour into the show, the intermission came. They ended with “Subdivisions” and the curtain dropped. It was during this time that the real stage crew redesigned the set and equipment even further. Peart’s R40 drum set was replaced with an older kit resembling the late 70’s early 80’s kits with the “starman” log in black.

Act 2. The show kicks off again after about a twenty-minute break. A new video plays on the center stage scrim. This time a video entitled, “No Country For Old Hens”. It’s a bloopers real filled with skits from the past couple decades of concert reels. Again, proving this band loves what they do. They have a great sense of humor. They truly get a long with each other not only on stage and as a band, but as best friends.

After the video ends, the Moog, synth sounds of “Tom Sawyer” echoes from behind the screen as it lifts to reveal another version of the bands look and sound. The steam punk props and washing machines now a wall of amplifiers. Showcasing their monsters of rock stadium arena classic look and feel.

They continue on performing tracks from Moving Pictures, Permanent Waves, Hemispheres, A Farewell To Kings and finally playing the entire opus and first half of the 2112 album, “2112”.

The bands breaks for a short time before coming back to a virtual video hologram intro from Eugene Levy as Mel from Mel’s Rock Pile. Dressed in a white leisure suit and looking like he’s from an early 1970’s discotheque, he introduces the band as, “3 young lads from Canada who really seem to be going places.” All though he makes comment that they should consider hiring more band members because, “Everyone knows that a three piece can’t make it in the music industry.” He then informs the crowd that they just got off a tour opening for KISS and to give them a big warm welcome as they just released their first record.

The Encore. The curtain rises for the last time revealing a yet again, an even further stripped down stage and set that now resembles a high school gymnasium. A disco ball twirls. Simple white can style lights on trees are used. The drums are now the smallest Pearts ever played on since the garage days and Lee and Lifeson’s towering wall of amps now reduced to a single amp on a chair with a microphone dangling over it. Lee plays his classic double neck Rickenbacker Bass and Lifeson on his legendary double neck Gibson guitar.

They were all in simple outfits as well. Geddy in a plaid shirt and jeans, Lifeson in a simple black collard shirt and slacks and Peart in a black t-shirt. Which is odd since at that time they were wearing the most flashy outfits. I really would have liked to seen Geddy and Alex in the old white silk kimono’s, but at least Neil stuck on a mustache.

They end the night by playing through three more classics off Caress of Steel with “Lakeside Park”, Fly By Night with “Anthem” and their self titled debut, RUSH completing the journey with “Working Man”. A final video plays them out as they Exit Stage Left.

If you are a true RUSH fan, you felt the emotions of this roller coaster of a ride. It was a somewhat sad feeling at the end. Like watching someone’s life flash before their eyes. Especially for the age of fans that have been around since there start. They can relate as they were there. The woman next to me had tears in her eyes at the end explaining just that. She said, “I remember being in high school in the 70’s and seeing the band back then. This brought out a lot of flashback memories.”

If you get a chance to see this tour, I highly recommend doing so. You won’t regret it, as a mater of fact, just the opposite. It will stay with you for a lot longer than just the 3 hour tour the boys from Canada gave.

For more information on this tour and getting tickets: