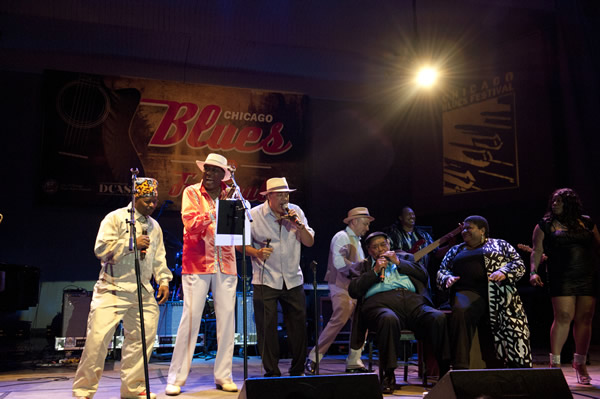 The Chicago Blues Festival is FREE admission and open from 11am to 9:30pm daily. Performances at the Petrillo Music Shell will feature headliners from 6pm to 9:30pm on Friday, June 12, continuing on Saturday, June 13, and Sunday, June 14, from 5pm to 9:30pm.

Chicago soul man Syl Johnson will headline the Petrillo stage on Friday, June 12, at 8:25pm. Having lived next door to blues guitarist Magic Slim in the 1950s, Johnson performed with Magic, Billy Boy Arnold, Junior Wells, Howlin’ Wolf and Jimmy Reed before he made his solo debut in 1959. He has forged a career in both blues and soul producing hits like “Different Strokes,” “Is it Because I’m Black” and “Take me to the River.” In recent years Johnson has performed with his very talented daughter Syleena Johnson, as well as his also famous brothers, blues guitarist and singer Jimmy Johnson and bassist Mack Thompson.

The evening of blues and soul at the Petrillo stage begins at 6pm with Chicago blues artist Zora Young. Young is a powerhouse vocalist with a three-decade career, including collaborations with Willie Dixon and Sunnyland Slim. Young’s soul-drenched vocals make her one of the genre’s best female artists.

The evening continues at 7:05pm with Clarence Carter, a singer-songwriter sure to bring fans to their feet with his hits “Strokin,’” “Slip Away” and “Back Door Santa.” An Alabama native, Carter was blind at birth and immediately gravitated to music, teaching himself to play guitar by listening to John Lee Hooker, Lightnin’ Hopkins and Jimmy Reed – developing a deep base of blues and southern soul.

Chicago’s own Buddy Guy will bring his legendary rhythm and blues to the Petrillo stage on Saturday, June 13, at 8:05pm. Recently honored with a Grammy® Lifetime Achievement Award and saluted at the 2012 Kennedy Center Honors as an invaluable American treasure, Buddy Guy is one of the most talented blues guitarist of his generation. Eric Clapton once said of Buddy Guy, “by far without a doubt the best guitar player alive.” As a true blues pioneer, he landed critical and popular success in the 1990s with three Grammy®-winning albums: 1991’s Damn Right, I’ve Got the Blues, 1993’s Feelin’ like Rain and 1994’s Slippin’ It.

The Petrillo stage will kick off on Saturday with Chicago blues guitarist, Toronzo Cannon at 5:30pm. Growing up in the shadows of the legendary blues club, Theresa’s Lounge, Cannon was influenced by the raw soulful sounds of Junior Wells, Muddy Waters and Buddy Guy.

The Taj Mahal Trio takes the stage at 6:30pm. In 2014, the two-time Grammy®-winning singer, songwriter, film composure, guitarist and multi-instrumentalist received the Life Achievement for Performance Award at the 13th Annual Americana Honors and Awards in Nashville. Taj Mahal’s “global fusion” approach to the blues has garnered him awards and fans all over the world.

At just seventeen years old, Shemekia Copeland released her sizzling 1998 Alligator records debut Turn the Heat Up! and garnered seven W.C. Handy award nominations, among others. Called “the next Aretha Franklin” by CNN, the two-time GRAMMY® nominee Shemekia Copeland has a passion for singing that she has referred to as a “calling,” along with a vision and personality that’s just as strong and unflinching as her incredible voice. She will take the stage at 6:30pm. Note: Shemekia Copeland is replacing previously announced artist Taj Mahal who had cancel unexpectedly.

The festival finale at the Petrillo Music Shell on Sunday, June 14, is a talent-packed lineup of artists honoring Muddy Waters and Willie Dixon. Dixon’s music and lyrics and Waters’ electric guitar are the nexus that transformed the Delta blues into the Chicago sound. Together they have influenced generations of musicians like the Rolling Stones, Eric Clapton, Led Zeppelin, Buddy Guy, Chuck Berry and countless other blues, jazz and rock-n-roll artists.

Billy Branch and the Sons of Blues with special guest Eddy “The Chief” Clearwater will kick-off the Petrillo stage at 5pm. Branch, a Willie Dixon protegé, is an award-winning artist who honed his harmonica skills with harp masters Big Walter Horton, James Cotton and Carey Bell.

The popular day stages contribute to the festival’s reputation as an internationally acclaimed event. Each stage features local and national blues musicians celebrating the genre’s rich tradition and heritage. Stages and performance times are: Budweiser Crossroads stage, 11:15am–5:30pm; the Jackson Rhythm and Blues stage, 11:30am– 5:30pm and the Pepsi Front Porch, noon–5:30pm.

The Budweiser Crossroads Stage will feature a line-up of top blues artists beginning Friday, June 12, with two incredible blues vocalists, Mary Lane at 12:45pm and Nellie “Tiger” Travis. On Saturday, June 13, fans will get a look at the next generation of blues stars with a high energy performance by Jamiah on Fire and the Red Machine at 11:15am, this young band will set the volume for the day at “11.” Jarekus Singleton will take the stage at 2:30pm and wow the crowd with his “funk-seasoned” guitar rhythms. Highlights during the day on Sunday, June 14, include a fixture on in Chicago’s blues scene, Chick Rodgers at 11:15am and singer-songwriter John Nemeth will close out the Budweiser Crossroads stage at 4:15pm with his electric blues and soul harmonica.

Fans will get a taste of the delta blues with a Chicago twist at the Jackson Rhythm and Blues Stage. Each day will start with a panel discussion at 11:30 a.m. followed by performances. On Friday, June 12, Jackson resident, singer, songwriter and harmonica man Scott Albert Jones will kick off the music at 1pm. Following the “Windy City” blues sounds of John Primer at 4pm, the day closes at 5:30pm with a jam session featuring Grammy® award-winning drummer Kenny “Beedy Eyes” Smith.

On Saturday, June 13, the Jackson stage will be filled with soul and a “whole lotta” rhythm and blues with the The House Rockers from Jackson, Mississippi, at 1pm, and Mississippi native and blues vocalist Johnny Rawls will bring his deep soul influenced music to the stage at 4pm.

Rounding out the lineup on Sunday, June 14, blues aficionados won’t want to miss a panel discussion on the Centennial of Muddy Waters and Willie Dixon with friends and family of the legendary artists at 11:30pm. The stage will also feature first time Chicago Blues Festival performances Tawanna Shaunte at 1pm and Tonya Boyd Cannon at 2:30pm.

Performances kick off at the Pepsi Front Porch on Friday, June 12, at noon and continuing throughout the day with performances that included Studebaker John and the Maxwell Street Kings at 1:30pm and Eddie Shaw and the Wolfgang at 4:30pm. Highlights on Saturday, June 13, feature the Chicago blues guitarist Lurrie Bell at 1:30pm, the Paul Osher Trio at 3pm and the Cash Box Kings at 4:30pm.

2015 marks the centennial for a number of legendary blues artists beginning at noon on Sunday, June 14, the Pepsi Front Porch stage will feature a “round robin” for the Class of 1915’s Honey Boy Edwards, Brownie McGhee and Johnny Shines with Bill Sims, Jr., Paul Kaye, and others. The stage will continue all day and end on fitting note with the Heritage Blues Orchestra Quartet at 4:30pm. The Heritage Blues Orchestra gives new life to the genre by honoring the traditions of African-American music with a mixture of low country and urban blues.

Blues fans wanting to get up close and personal with artists don’t want to miss the Southwest Airline Blues Lounge. The lounge provides an area for festival goers to relax and listen to music and stories from the heart throughout the day from 11am–8pm.

The festival also features intimate performance areas, like the Blues Kids Foundation and the Windy City Blues Society. The Blues Kids Foundation area offers harmonica lessons and performances by the next generation of blues artists. The Windy City Blues Society, a festival favorite over the past few years, features an eclectic lineup of artists from Chicago and around the country. Schedules for both of these areas can be found at chicagobluesfestival.us.

During May and June there will be several preview performances and film screenings held at Daley Plaza, the Chicago Cultural Center, Chicago Public Library locations throughout the city and Maxwell Street Market. Highlights include two special documentary film screenings in honor of Muddy Waters and Willie Dixon at the Chicago Cultural Center (78 E. Washington). On Tuesday, May 26, at 6pm. the festival will present The Life and Times of Muddy Waters –Can’t Be Satisfied and on Thursday, June 4, at 6pm. Willie Dixon – I Am The Blues, 1977. The “official” Chicago Blues Festival preview on Daley Plaza is set for Monday, June 8, at noon with a Willie Dixon Tribute featuring Bobby Dixon and special guests.

For a complete schedule and festival details, please visit chicagobluesfestival.us. To plan your trip to Chicago for the Blues Festival this June 12-14, visit choosechicago.com. Join the conversation on Facebook (Chicago Blues Festival) and follow us on Twitter, @ChicagoDCASE (#ChiBluesFest). The Department of Cultural Affairs and Special Events (DCASE) is dedicated to enriching Chicago’s artistic vitality and cultural vibrancy. This includes fostering the development of Chicago’s non-profit arts sector, independent working artists and for-profit arts businesses; providing a framework to guide the City’s future cultural and economic growth, via the 2012 Chicago Cultural Plan; marketing the City’s cultural assets to a worldwide audience; and presenting high-quality, free and affordable cultural programs for residents and visitors.

Department of Cultural Affairs and Special Events (DCASE) is dedicated to enriching Chicago’s artistic vitality and cultural vibrancy. This includes fostering the development of Chicago’s non-profit arts sector, independent working artists and for-profit arts businesses; providing a framework to guide the City’s future cultural and economic growth, via the 2012 Chicago Cultural Plan; marketing the City’s cultural assets to a worldwide audience; and presenting high-quality, free and affordable cultural programs for residents and visitors.