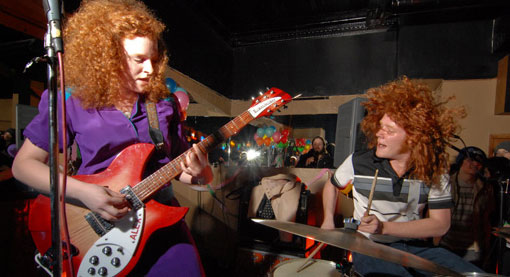 White founded her current group, White Mystery, with her brother Francis on April 20, 2008. White Mystery is known for their relentless tour schedule in which White claims to have played 300 shows in the band’s first three years. The group has played with national acts such as Garbage, Shonen Knife, The Stooges and Weezer. They played on a parade float with Sir Richard Branson for the grand opening of Virgin Hotels Chicago. The group has released 5 full-length albums as of 2015.

White cites Poison Ivy from The Cramps as being one of her biggest influences. White said in a 2011 interview, “Poison Ivy is definitely my guitar role model. She’s a beautiful redheaded woman who was who she was. Her relationship with Lux was similar to Francis and me; they could hang out for hours and not get sick of each other.” She also lists Patti Smith, The MC5 and Garbage as other influences to her sound and style.

Recently, White Mystery played at the iconic children’s television show Chic-A-Go-Go’s 1000th episode.  Ms Mia and Ratso hosted a celebration party at The Promontory in Hyde Park.  They are regulars on the show so it was only natural that they help celebrate the milestone with other Chicago legends.

The band will be playing all over town this summer including Riot Fest and this weekends Rock N Roll market.  https://do312.com/rocknrollmarket.  How they’re not a part of Redhead Festival, I’ll don’t understand, but there’s always next year.  https://www.facebook.com/RHDchicago

Be sure to catch the White’s out on tour live.  They are as energetic and free as they come.  You won’t regret it.