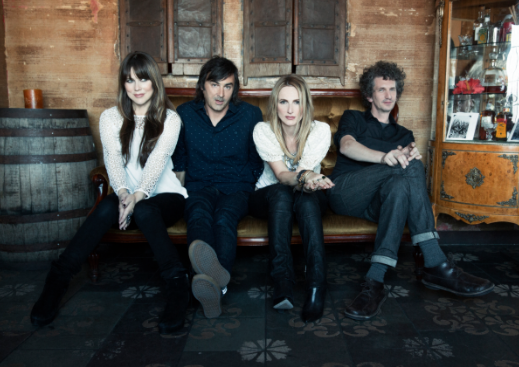 Named after Veruca Salt, the spoiled rich girl from the children’s book Charlie and the Chocolate Factory by Roald Dahl and its 1971 film adaptation Willy Wonka & the Chocolate Factory directed by Mel Stuart, Veruca Salt was formed in Chicago by Louise Post (guitar/vocals) and Nina Gordon (guitar/vocals). Post and Gordon were introduced through mutual friend Lili Taylor, and began playing music together. They wrote songs for a year and a half before being joined by Gordon’s brother, Jim Shapiro, on drums and Steve Lack on bass. Songwriting was shared between Gordon and Post, though the two seldom collaborated. Rather, each would typically submit a complete song to the group and sing the lead vocal on that song, while the other would record backing vocals.

The band had performed a handful of shows when Jim Powers of Minty Fresh Records asked them to sign to the independent label.[2] The band’s first release was the single “Seether“/”All Hail Me” on Minty Fresh Records, in 1994. The single was a success and Veruca Salt accompanied Hole on a tour, before releasing their first full-length album, American Thighs, which eventually reached Gold status.

After signing to Geffen Records, the band quickly gained in popularity as “Seether” became an MTV hit. A stop-gap EP recorded by Steve Albini, Blow It Out Your Ass It’s Veruca Salt, was released in 1996.

Their second album, Eight Arms to Hold You, was produced by Bob Rock and released in 1997. Lead single “Volcano Girls” gained exposure as the opening theme to the teen comedy film Jawbreaker. Veruca Salt performed another single, “Shutterbug“, on Saturday Night Live; however, instead of the featured musical group performing two songs as had been tradition, the musical performances were split between Sting and Veruca Salt. Shapiro left the band soon after the release ofEight Arms and was replaced by Stacy Jones (of Letters to Cleo and American Hi-Fi). Jones toured with the band on the Eight Arms tour, but never recorded with them.[citation needed]

In 1996, Veruca Salt appeared as Pavement‘s replacement band in their video “Painted Soldiers”.

In 1997, they opened for the band Bush in a North American Tour.

In 1998, Gordon left the band to pursue a solo career (her first album Tonight and the Rest of My Life, was released in 2000). The undisclosed dispute between Gordon and Post has been described as “one of the greatest rock soap operas since Fleetwood Mac or Hüsker Dü.”[4]

Post, as the only remaining band member, contributed the song Somebody to the Depeche Mode tribute album For The Masses before recruiting a new lineup. Guitarist Stephen Fitzpatrick joined and went on to become one of Post’s principle songwriting partners during the next decade. Jimmy Madla and Suzanne Sokol joined on drums and bass guitar respectively. The new version of the band signed with Beyond Records and released Resolver in 2000 which spawned both a single and video for Born Entertainer.

Suzanne Sokol left the band at the end of 2000 and was replaced by Post’s friend, Gina Crosley. The band continued to tour through the summer of 2001 in the UK. Post and Crosley also attempted to form a supergroup with Courtney Love ofHole and others but the project soon imploded.[5] This allowed the pair to focus on new material for Veruca Salt which eventually yielded the Officially Dead EP that was primarily distributed on during the band’s 2003 tour of Australia (followed by a 2005 tour of Australia). Crosley is specifically credited with co-writing “Smoke & Mirrors.” She also worked on songs that later appeared on IV, but no credit is officially given and she left before the album was completed.

By 2005, Madla left to enter the restaurant business and Crosley was also dismissed. Veruca Salt began 2005 by touring Australia undertaking both headline festival appearances and club shows. They were replaced in the studio by Solomon Snyder and Michael Miley respectively. This session resulted in the Lords of Sounds and Lesser Things (LOSALT). The band went on tour with Post, Fitzpatrick, drummer Eddie Livingston, and bassist Nicole Fiorentino. LOSALT was released independently by the band and included six new songs. The title of the EP is an extract from Zora Neale Hurston‘s Their Eyes Were Watching God. This lineup then recorded a full-length album, IV, and released it in September 2006 (like Resolver before it, this album was released a month apart from a Nina Gordon solo album). The band then went on what would prove to be the last tour of Louise Post’s solo incarnation of the band. A single, “So Weird”, was released to radio at the end of October 2006 but neither the song nor the album did well commercially.

In 2007, the band recorded a cover of Neil Young‘s song “Burned” for a 2007 Breast Cancer Benefit album and then went almost entirely dormant. Louise Post took time to have a child while Fiorentino went on to play bass with the Smashing Pumpkins and The Cold and Lovely. Kellii Scott returned to his original bandFailure. On March 14, 2012, the band announced on their official website that they were on an indefinite hiatus.

On March 15, 2013, the band announced the reunion of its original line-up (Nina Gordon, Louise Post, Jim Shapiro, and Steve Lack) with a message on the band’s official Facebook page which read, “for now let’s just say this: hatchets buried, axes exhumed.” The band have also mentioned that they might be open to adding material from their time apart into their sets at some point.[6]

On September 29, 2013, the band announced via social media that they were working on new material. Their first release since reforming came in the form of a release for Record Store Day 2014. The band released a 10-inch vinyl EP, MMXIV, which contains two new songs, “It’s Holy” and “The Museum of Broken Relationships” on one side and a twentieth anniversary re-release of Seether on the other. The band then toured both the USA and Australia.

On May 19, 2015, the band announced the release of their fifth full-length LP, Ghost Notes. The album, scheduled for release on July 10, 2015, is the first to feature the band’s original lineup since 1997’s Eight Arms to Hold You.