Opening Night For Genesis US Tour, Pulls Off Another Parlor Trick For Chicago Fans At United Center 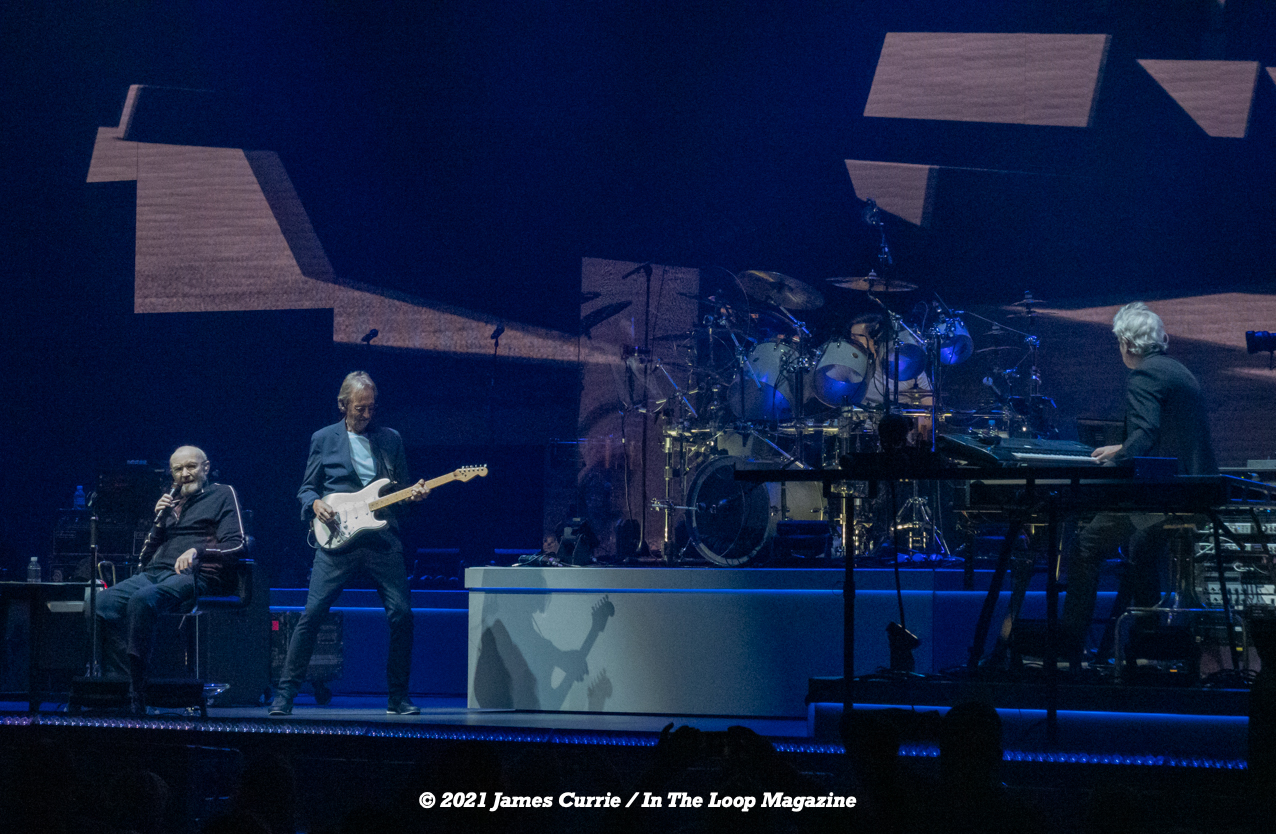 You’ve got to get in to get out, The Last Domino? is a tour that shouldn’t have been possible. A decade ago singer/drummer Phil Collins retired from the music industry sighting ailments and family commitments. Effectively, after the short 2007 reunion that produced a quick live album and tour, Genesis was done. They were inducted into the Rock n Roll Hall of Fame in 2010 and all seemed quiet on the western front. Fast forward a dozen or so years and the band is back, albeit originally scheduled for a 2020 tour, COVID had other plans and pushed things to now. November 15th, 2021, the UK Prog-rock legends, Genesis, kicked off the first leg of their US “The Last Domino?” tour in Chicago at the megalithic United Center.

You wouldn’t have guess there was still a global pandemic going on outside if you weren’t stopped and checked for a vaccination card at the door. From there, besides seeing masks on most faces in the crowd, it was business as usual. The house was packed from the floor to the rafters. At one point during the show, Phil Collins even pointed this out with a crowd focused involvement cheer. Collins said, “Let me explain a little about what the domino effect is. Some of you probably already know but it’s like this…” He then motioned to the southend of the building as said, “This side might cheer loud, but when they do, this side (pointing to the North side of the venue) might react and cheer back louder.” He then called for the middle section and not leaving them out, the far back seats get the call for action. Getting everyone in the venue highlighted by spotlights and giving all a voice.

But I’m getting ahead of myself. Let’s start from the beginning.

Shortly after 8PM, the lights go down and intro music starts playing. The crowd wells up with hoots and hollers. The massive stage has a back wall video screen that is stage to ceiling and spills over on both sides of the stage wings. Genesis file on stage. One thing we notice right away is that Phil Collins (70) and appearing very frail, dressed comfortably in a black track suit, is walking with a cane and doesn’t go behind the drums, but instead – front and center – were he has a chair and table waiting for him. For those who don’t know, Collins has been battling several health issues for years that have left him unable to play drums anymore, but he can still sing. Thankfully, these ailments haven’t damaged Phil Collins’ voice as he kept up throughout the night with the band turning on twenty -three songs again after years off.

Side note: Filling in on drums is Phil Collins’ son, Nic Collins (20). A meaningful fill in that, as a father and shade tree musician, I could only imagine how emotional this substitution must feel. At points during the show, you could see Phil turning around in his chair, miming air drums to his son and smiling. Even during the band introductions, when it came time to introducing Nic, he had fun with it and said, “And on the drums, (huge crowd cheers and applause) Mr. Nicolas Collins!” Later after talking about how long the band has been around saying, “We all know where he’s been the last 50 years” (chuckles). Nic, is an apparent new fan favorite.

On this tour, Genesis is comprised of the core which is Phil Collins, Mike Rutherford and Tony Banks. The aforementioned Nic Collins of course on drums, long time session musician (Milwaukee native) Daryl Stuermer on guitars and bass who has played with Genesis and their side projects since Steve Hackett’s departure in the late 70’s, also on backing vocals, Daniel Pearce and Patrick Smyth helping Phil on the backend as well as providing some percussion accompaniment.

Opening night in Chicago kicked off with “Behind The Lines / Duke’s End”, “Turn It On Again” and “Mama”.  A couple more songs in, there was a short change of musical stylings that took place about mid way through. The band all gathered in the front and played a stripped down, near acoustic performance, of some classic tracks like; “That’s All”, The Lamb Lies Down On Broadway” and “Follow Me”. Genesis also played “Misunderstanding” A song not played live since the mid 80’s. Instrumental versions of “Firth of Fifth” and “The Cinema Show” and for some reason, only the first two verses of “Fading Lights”. We were treated to a greatest hits this evening that also brought out “Throwing It All Away”, Tonight, Tonight, Tonight”, “Invisible Touch”, “No Son of Mine” and more leaving even the most basic Genesis fan fulfilled.

The show was filled with amazing visuals to match up with the classic songs bringing new life to them. Almost like the band was scoring mini movies behind the stage. Highlights from these were all over the place. During the hauntingly creepy, “Home By The Sea”. Collins’ got the audience primed for it saying, “This one is from a while back. It’s about ghosts and spirits and a haunted house.” He then prompted the audience to participate saying, “So, I everybody, to put there hands in the air and go… woooooooo (gesturing a ghostly sound). The fans graciously replied. The visuals were of green ghastly spirits flying around a disheveled house on a sea coast. According to Collins’ this was based on a try story of a haunted house they knew of.

Other visuals that stood out where during the song, “Land of Confusion”. Collin’s explained, the song was an oldie, but has new meaning today and the visuals are updated to match what’s happening currently. This time with references to COVID, toilet paper shortage, political stance and public misconceptions.

The lights on this tour were otherworldly. Massive gable systems in place that shape shifted and morphed into new landscapes that looked like cities, UFO’s landing, sunsets, giant cassette tape shelf and more giving an almost Pink Floyd feel.

The band sounded amazing. Tony Banks commanding from his perch never moving, talking or giving much life to it through his body language, but his fingers tickling those keys made him a diabolical madman. Mike Rutherford bounces back and fourth between guitars (yes the double-neck made an appearance) as well as several basses, trading off stringed duties with Struermer seamlessly. The added backing vocals filled in nice to Collin’s strained vocals at times which seemed a bit more on the hirer end of the scale than the original recordings we all remember. But again, with age and aliments, not too shabby.

The night ended with an encore of three songs. The video wall started up again, this time with the iconic three walking silhouettes of Phil, Tony and Mike scrawling across the screen before “I Can’t Dance” started. This was next met with “Dancing With The Moonlit Knight” and finally, “The Carpet Crawlers” which got the audience singing along with those memorable lyrics foreshadowing the end of the performance, “got to get in to get out”. Genesis got us all in, physically and emotionally, even during a global pandemic, now it was time to get out, go home and be safe and ready for whatever the confusing world brings next.

A big part of me was hoping that this tour was truly going to be something special and Peter Gabriel and Steve Hackett would have made some sort of appearance. Like the night would have ended with an encore with the pair reuniting with their mates. Who knows, maybe this could actually happen at the end of the tour on the final date. Fingers crossed.

Might this be Genesis’ (Phil Collins) swan song? We’ve heard this before from other bands stating, “This is our last tour ever”. We’re looking at you Ozzy, KISS and Cher, but according to Collins, this really is his last tour and stated there are no plans for making new music with the band in the future. It was kind of sad to see Collins on stage this way as he always such an animated character, but he is still on stage, he is still trudging forward and for the next few months into 2022, we’ll all get to see and hear more Genesis, Even if for one last time. Near the end of the show Collins claimed, “Well, we’ve pulled off another Genesis parlor trick.” For Genesis fans around the world, I think we’d take him anyway we can to hear these classic songs live. Be well Phil Collins.

2 thoughts on “Opening Night For Genesis US Tour, Pulls Off Another Parlor Trick For Chicago Fans At United Center”