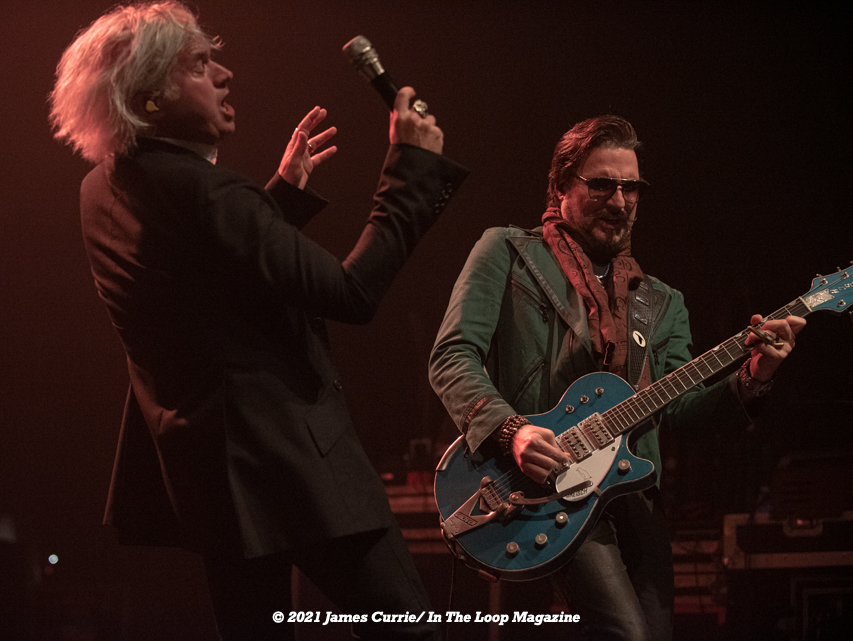 Rival Sons Swing Through the Chi

“We have an entire beautiful theater here filled with good hearts and good people. Everyone is here to lift you up, take care of you, give what you need.”

Lead singer Jay Buchanan rarely addressed the audience during Rival Sons gravel, grit and groove filled ninety-minute set but when he did, the words chosen were as invigorating as the songs performed. Judging from his frequent chest and throat rubs followed by copious sips of whatever healing elixir helped get him through the night, the most titanic tonsils to ever spawn from the bucolic Wrightwood forest to urban streets of Long Beach California, set aside whatever physical discomfort he may have been experiencing to release a carefully crafted Kraken roar cache that captivated the fist-flying faithful who braved the lousy elements and downtown traffic for a glimpse of vintage sounding modern rock greatness.

While the room and players warmed, the So Cal fellows found their sonic stride as they launched into a complete, track by track rendering of the band’s seismic 2011 sophomore long play, Pressure & Time. By selection four, however, the smoldering ballad, “Only One,” the ancient Vic was in full resurrection, frenetic fans seduced into soulful Hammond B3 submission by the dancing digits of touring keyboardist Todd Ogren, sporting an Amish faced outcropping for the ages. “Get Mine,” “Burn Down Los Angeles,” “Save Me,” “Gypsy Heart,” “White Noise,” and the luminous Zep-like “Face of Light” put a Goin’ to California” esque exclamation point on part one of the evening’s melodic festivities.

How did this assembly of talented and driven musicians jump from the palm tree lined streets of Sublime’s LBC, escape the taco stands and tramp stamps of la la land’s sun drenched sand camp? Call it a confluence of electromagnetic and iconic influential events. Four young, ambitious artists coalesce around the Long Beach music scene after guitarist Scott Holiday knew from avidly following Jay’s MySpace page, that the singer was something truly special. Scott met drummer Mike Miley, who introduced him to Jay, his longtime local collaborator and the rest – to borrow a time-tested tuneful cliché – history.

The buzz on ‘Pressure & Time’ was so deafening, it caught the attention of some rather revered tastemakers, among them axe legend Jimmy Page and album art avatar, Storm Thorgerson. Sir Pagey spoke publicly and passionately of the band’s power and potential, his enthusiastic sentiments appearing in various British music publications, which helped the Sons secure some significant European tour opportunities. Add to the early alignment, the man who designed the cover of Dark Side of the Moon volunteers to craft your presentation.

“I don’t think you can be certain what’s going on here,” recalled the late, great Thorgerson about his Sons’ cover. “To me it’s a picture about fear or concern. Here’s someone about to descend and doesn’t know what they’ll face, or where this might lead. So, in his mind he’s imagining the action. That’s what you see, into his mind, as he focuses on what’s about to happen. When he gets to the bottom of the stairs, where does he go? Turn left, right or straight ahead, anything’s possible. And I hope this cover will have fans of the band intrigued for a long while.” Or maybe it’s just a middle aged man approaching a fork in the road while contemplating the headless youthful female figure clad in underwear that beckons a choice in direction? Who knows, the poetry of imagery belongs to the observer.

It’s a decade later and the intrigued Rival Sons global fan base has expanded considerably thanks to a series of solid studio efforts and tireless concert trekking. After a quick breather (and several more sips of his mystery tonic), longtime brown lid covered (now hatless blond front man) Buchanan, rides his second wind (and instrumental brothers) into part two of the evening’s rapturous rock rodeo, lassoing several neo classics off Head Down, Great Western Valkyrie and their most recent celebrated offering, Feral Roots, “Too Bad,” the anthemic, “Open my Eyes,” the thermo nuclear, “Electric Man,” and “Do Your Worst” highlight the backend of the program, which culminates with a soaring, fence clearing, “Keep on Swinging.” Tonight, the kids from the Pike drove it high, hard and far thanks to Scott Holiday’s incendiary riffs and dexterous noodling; buttressed by the concrete rhythmic foundation supplied by bassist Beste and drummer Miley.

No matter how scary and uncertain our freaky future continues to appear, as long as the Rival Sons just keep their head down, the galaxy’s the limit.

For photos from the show at The Vic, click here