In The Court Of The Auditorium Theatre, King Crimson Rule Chicago’s Loop 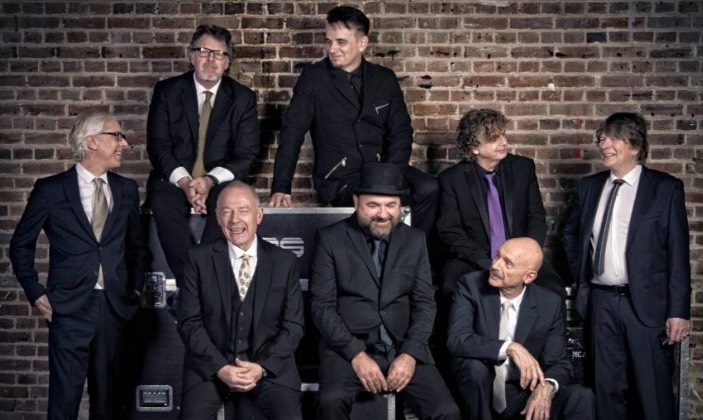 At least for one night that is, as King Crimson return on their 50th Anniversary tour. Continuing on their celebration tour and the release of their debut album ‘In The Court Of The Crimson King’, tonight’s stop at the historic Auditorium Theatre brings fans right up to the band’s career that helped define a genre that they still reign.

King Crimson have a thing for Chicago. For years they have played in Chicago and just 2 years ago they recorded and released a live album that was made just bocks away from tonight’s performance. The fans have a thing for them as well as they lined up around the block (in the heat and humidity) to get in to see this sold out show in the vintage grand hall.

Before the show began, we got a PA introduction that included a reminder to not take photos or video. Keep the phones in your pockets and enjoy the show. The announcement went of to say, if you do need to take a photo please wait until the very end when the band takes a bow. This is something that is becoming more common with live performances. And honestly, I think most real music fans would agree with.

The stage was set in what we see as the new standard band formation. It consists of the drummers in front and everyone else in the back. They’re lined up in two rows, the front is filled with Pat Mastelotto taking stage right followed by Jeremy Stacey (taking the place of Bill Rieflin) taking front and center and Gavin Harrison filling in at stage left. In the back, we find Mel Collins returning with the band blowing the brass and woodwinds, Tony Levin on bass and his Chapman stick, Jakko Jakszyk taking the lead on vocals and strapping a guitar with the ‘In The Court of the Crimson King’ album cover on it and last but certainly not least, Mr. Robert Fripp on guitar and keys commanding the tight ship.

This is not to say that these are the only things each musician played. Oh no, far from it. I’m just referencing their main instruments. These are multi talented, master musicians. They all play at least three different instruments during this performance. Stacey even switches off from playing a live drum kit, to turning around and playing piano. Everyone seems to have some sort of keyboard, moog or synth.

The band walked out and took the respective positions just after 8pm. The percussionists, all wearing black button down long sleeve shirts and the rest wearing a mix of white shirts with vests and ties. A seemingly formal looking bunch whose fans typically dressed in concert t-shirts dawning their name.

We begin with the drummers taking control. Mastelotto, Stacey and Harrison sync in rhythmic timing that can only be described as percussion perfection. Playing off each other, they roll through “Hell Hounds of Krim” finishing and putting the audience in a fury.

Fans at a King Crimson, for the most part, show serious respect clapping after each solo and standing after each song. Something normally not seen at a “rock show”. But then this isn’t a traditional rock show. This is more like a jazz showcase with each member bouncing in and out of the spotlight. I say, “for the most part” for a reason, as there was one couple who apparently didn’t get the memo on proper King Crimson show etiquette. This couple walked in late well into the set and asked everyone to move for them, then in the middle of another song, one gets up to go for more drinks pushing by everyone and talking to her friends out loud like in a bar. This might be alright for a Nickelback concert, but not here, but I digress.

Set one continues through about a dozen songs ending high with the sudo hit, “The Court of The Crimson King”. A song that even if you don’t know the band, have most likely heard. After this, they take a break and retire for a 20-minute intermission.

Returning from the wings, the kick into “Devil Dogs of Tessellation Row” from 2016’s ‘Barcelona’. King Crimson continue on with one prog rock classic after another. These fans seriously can’t get enough as the lengthy set doesn’t end until almost 11pm. Before calling it quits returning with an encore of another beloved track, “21st Century Schizoid Man”.

One of the things that makes this performance stand out is how the band has reworked the songs. They don’t play them exactly like the album. Fripp and Co. keep the tunes fresh and expansive like their initial sound.

Seeing a King Crimson show is unlike any other rock concert. The closet thing I can describe it to would be something like Rush meets Frank Zappa. It’s lush and intricate with multi layers of off time patterns and rhythms.

Watching the band play is like trying to solve a complicated math problem in the air. The band may be hard at work but you’d never know it. They seemingly rock through the songs like it’s second nature to breathing. The are also keen on us as a subject. Throughout the show, I noticed several members making eye contact with me and others around. The house lights remain lit slightly. They make contact with people as they are playing giving the occasional smile or nod almost looking for approval. They are steeped in their work and clearly enjoying it fully. The band don’t say much. They don’t jump around. They don’t have crazy lights flashing around to match the beats. They are here to play the songs fans have come to love for 50 years. That’s what they know. That’s what they do. That’s what we get. And it’s a good match.