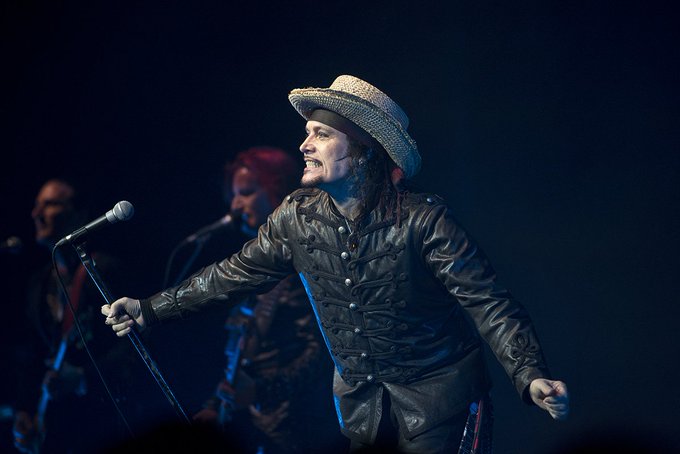 Out of all the great post-punk pop artists of the eighties, none have been more polarizing than Adam Ant. His wild pastiche of romantic masculinity exemplified by his English cavalry uniform, native American warpaint and his anti-post-punk posture took the eighties by storm in a comet of a career. Jettisoned by the punk impresario, Malcolm McLaren, Adam formed a new band and essentially waged a personal war against him and the contemporary post-punk scene as a whole.

Inspired by the music of Burundian drummers, Adam and his band crafted music that was a far cry from the post-punk and pop sensibilities of the time. When the album Kings of the Wild Frontier was released, the sound of Adam and the Ants, marked by rollicking beats, tribal chanting, and a deranged sense of theater, left many bewildered but enraptured so much so that the album along with its follow-up Prince Charming were massive successes, although the latter was a decidedly mixed-bag compared to the former. Adam then embarked on a solo career, during which he expanded on his burgeoning reputation with the legendary Friend or Foe, yielding the savagely brilliant “Friend or Foe” and the roaring “Goody Two-Shoes”. However, his later output, many agree never reached the heights of Kings and Friend or Foe, leading many to write off his career as something of a missed opportunity or a hilarious musical joke. However, if the naysayers saw Adam Ant’s performance last night at The Vic, they would have sang a different tune.

Before Ant, the LA outfit, Glam Skanks took the stage and blew the house down in every sense of the word. Calling forth the very best of the glam-rock era, the Glam Skanks, opened the show with an absolutely thunderous rock set. To put it simply, if one were to wrangle the rain, wind, thunder, and lighting into an all-girl rock band it would be the Glam Skanks. The lead singer swept and soared across the stage like a gale while the guitarist scorched her guitar like lighting in a meadow with some of the most face-melting licks and riffs I’ve ever heard. In the meantime, the drums beat like a monsoon  while the bass rumbled like thunder. Even with a twenty-minute set, the Skanks came to rock and they accomplished their task in every sense of the word. The only problems with their set were that the set was too short and all of their songs were too damn good. Songs like “Bad Bitch”, the Donna Summer cover “Hot Stuff” and their opener, “No Way to Live” were all phenomenal. However, the best song from their set, was “Timewarp Woman” with its simple two note guitar lick and lumbering rhythm. Essentially, the band was phenomenal and a great warm-up before Adam Ant.

Soon after the Glam Skanks, the lights dimmed and Adam Ant appeared onstage with his band, which included two drummers. Dressed like a caballero with a straw hat and bandanna, Ant launched into “Friend or Foe” from the eponymous album and then soon into the riotous “A Place in the Country”. Much of the set spanned the entirety of Friend or Foe, but once the band finished playing the album, the show hit its stride with the classic Adam and the Ants’ oeuvre. Classics such as “Dog Eat Dog”, “Antmusic”, and “Vive Le Rock” all became tough, muscular rock epics instead of the eighties pop staples as history remembers them. Ant and the band closed their set with “Stand and Deliver”, and then returned for the encore to sing, “Press Darlings”, “Red Scab”, and finally “Physical (You’re So)”, really, the song everyone came to hear. Overall, Adam Ant still possessed the dynamism he had in the eighties as he twirled and flamenco-stomped across the stage and his set.

Overall, yesterday proved to be another great night for music in Chicago when the legendary rocker Adam Ant and the LA glam-revival band, Glam Skanks appeared at the Vic. Playing his seminal solo album, Friend or Foe in its entirety along with other well-known songs, Ant and his band lit up the stage and showed everyone that he can still rock.