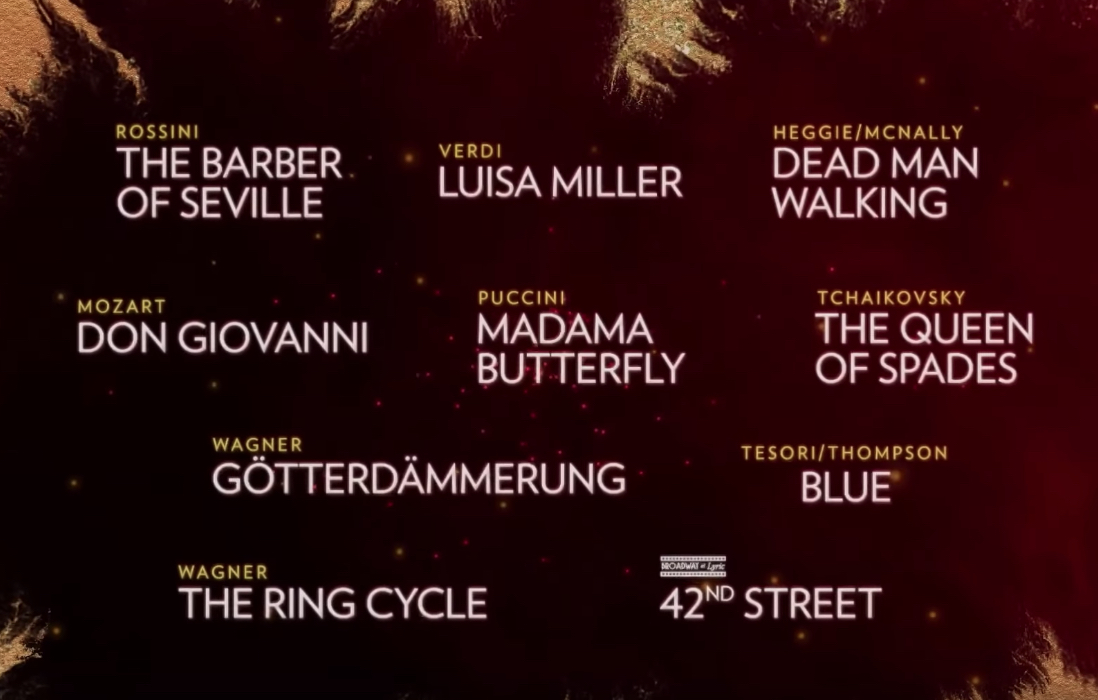 On Thursday, January 24, hundreds of subscribers braved the chilly weather to attend Lyric’s 2019/20 Season Preview event. General Director Anthony Freud, Music Director Sir Andrew Davis, and WFMT Program Host Lisa Flynn talked about how the new season came together, followed by an exciting program of music from artists in The Patrick G. and Shirley W. Ryan Opera Center Ensemble. Lyric premieres, rarely performed works, and a monumental Ring coming in 2020 were among the choices for subscribers that night, who became among the first to renew their seats for the unforgettable lineup.

A new-to-Chicago Luisa Miller will launch a series of early Verdi works in the coming seasons, as Lyric presents operas by the master composer that are musically thrilling, dramatically compelling, and not often seen. Subscribers were also excited to hear that Tchaikovsky’s The Queen of Spades will return for the first time in 20 years, featuring a thrilling cast of stars. Jake Heggie and Terrence McNally’s Dead Man Walking makes its company premiere as Lyric commits to putting a new or recent work on the mainstage each season. This will complement the annual chamber work, which in 2019/20 will be the new commission Blue, performed in collaboration with Chicago Shakespeare Theater at Navy Pier.

World-class stars pack the season, with The Barber of Seville featuring the return of three artists loved by Lyric audiences: Adam Plachetka in the title role, Marianne Crebassa as Rosina, and Lawrence Brownlee as Almaviva. Soprano Ana María Martínez sings the title role of Madama Butterfly, and Don Giovanni will bring the much-anticipated company debut of famed bass Ildar Abdrazakov leading the cast. Soprano Sondra Radvanovsky appears twice in the season – making her role debut as Lisa in The Queen of Spades, and headlining a thrilling series of semi-staged concert events, The Three Queens, where she will perform the daunting and thrilling finales of Donizetti’s Anna Bolena, Maria Stuarda, and Roberto Devereux with the Lyric Opera Orchestra and Chorus and artists from The Ryan Opera Center.

The season also features three complete Ring cycles, plus two performances of Götterdammerung. The new David Pountney production has won audience and critical acclaim in its first three installments and already has opera lovers from around the world booking reservations to attend the bucket-list performance experience. Amplifying the onstage magic, a slate of ancillary activities is planned, including the return of Longer! Louder! Wagner!: The Second City Wagner Companion, discussions with Wagner scholars, chances to hear from the creative team and see the backstage magic, and more. Only 2019/20 subscribers have early access to purchase Ring packages until April 1 for cycles in April/May 2020.

Special events are also on tap – from the only Chicago appearance of legendary Welsh bass-baritone Bryn Terfel, in an intimate recital program, to the annual Broadway at Lyric offering, 42nd Street. Families will enjoy the annual Millennium Park performance, as well as backstage tours and the return of Family Day.

Season packages are now on sale starting at 4 operas for just $96. Create Your Own packages allow you to customize the operas, dates, and seats of your choice, and you can now mix and match this season and next season’s offerings to craft your ideal package!