‘Four Women’ a Fine Showcase of a Musical Genius 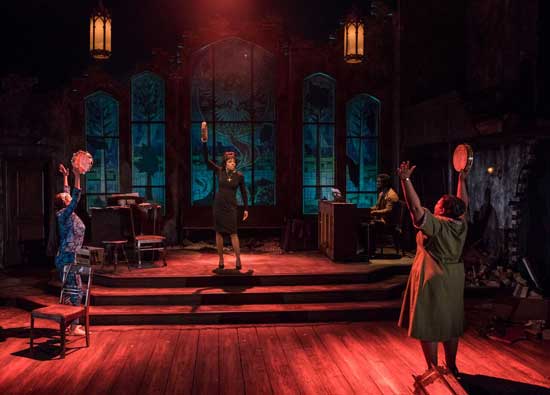 Nina Simone was one of the most brave, incisive, and daring musicians of the 20th century, and her genius has received a fine tribute in Northlight Theatre’s production of “Nina Simone: Four Women.”

The play, which combines dramatic elements with some of Simone’s most notable songs, is set in the aftermath of the 16th Street Baptist Church bombing in Birmingham, Alabama, a terrorist attack by white supremacists that took the lives of four young African American girls. Taking place in the church itself (spectacularly staged by Christopher Rhoton), the play follows Simone (Sidney Charles) as she struggles to craft music in response to both the Civil Rights Movement and the brutal response it inspired from the nation’s ruling elites.

As Simone holes up in the church, she is joined by three other black women, all metaphorical embodiments of the characters from Simone’s legendary song “Four Women”: Sarah (Deanna Reed-Foster), a working class domestic and mother; Sephronia (Ariel Richardson), a fiery activist and booster of the Civil Rights Movement; and Sweet Thing (Melanie Brezill), a prostitute. Through their interactions, playwright Christina Ham provides a fine showcase for not only Simone’s musical genius, but also her uncompromising views on equality, revolution, and America (in short, Simone was a friend of Malcolm X’s and had no love for Martin Luther King’s nonviolent approach).

And indeed, the musical talents on display are formidable. Charles – a remarkable singer in her own right – perfectly captures Simone’s bellow and power without resorting to caricature. Brezill and Richardson bring wonderful emotion and clarity. And Reed-Foster (who I vividly remember from a sterling 2016 production of “The Colored Museum”) is a marvel. All four women blaze through such songs as “To Be Young, Gifted and Black,” “Sinnerman,” “Brown Baby,” “His Eye on the Sparrow,” and  of course, “Four Women,” the song Simone wrote in response to the bombings.

Lastly, “Nina Simone: Four Women” is an excellent introduction to many of the ideologies and motivations behind both the Civil Rights Movement and, broadly, black politics in America. Although Ham’s approach has its drawbacks – with the three supporting actresses being embodiments of different aspects of black culture, they sometimes operate more as symbols than as flesh and blood characters – she does do a marvelous job of balancing both the peaceful, nonviolent ideologies of Dr. King and the more uncompromising, nationalistic visions of Malcolm X. And in the end, such an education is essential for anyone hoping to understand the ceaselessly complex topics of race and capitalism in America, especially in the modern era of Trump, Black Lives Matter, and Alexandria Ocasio-Cortez.