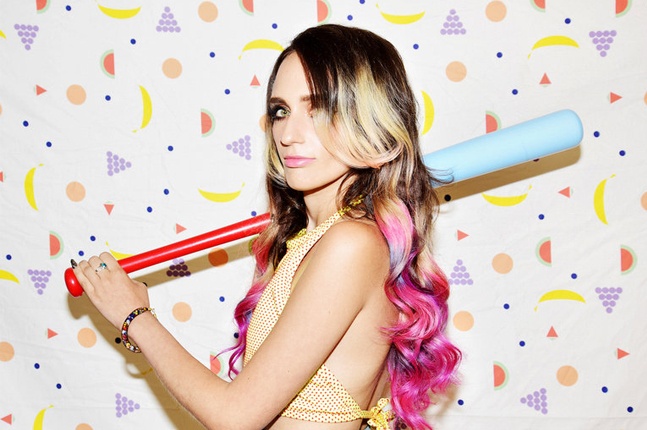 It’s been a busy few years for Sadie Dupuis. Since the release of Speedy Ortiz’s critically acclaimed Foil Deer in 2015, she put out a record as a side project (Sad13), wrote a new Speedy Ortiz record, scrapped it, and wrote another Speedy Ortiz record. In the Loop’s Christopher David caught up with Dupuis in anticipation of Speedy Ortiz’s show at Subterranean this Saturday, May 12th in support of their new album, Twerp Verse.

In the Loop: You’ve noted that the political climate we’re currently enduring was the lyrical and thematic inspiration for what became Twerp Verse.  Your lyrics aren’t overtly political, though – how does your writing process generally unfold?  Do you sit down to write songs about specific things, or do you operate more from a stream of consciousness standpoint?

Sadie Dupuis: My lyrics have never really been overt, regardless of the subject. I gravitate towards lyrics, poems, novels, art, and other language-based mediums that surprise whoever interacts with them through play with metaphor, subversion of standard diction, strange images, and whatever other fun tricks the author employs. I always compose and arrange music before I write the lyrics, so by the time I have the tone of the song I tend to know roughly what I’m going to write about, which tends to be whatever I’m upset or psyched about that day. For the past few years, that’s been America! Of course, songs don’t have to be expository, so there are times when the free associational aspect of penning lyrics leads the song to be about something I didn’t see coming. But the subjects for these songs are pretty straightforward if I boil them down to one meaning: liberal centrism, exploitative capitalism, consent, tone policing, etc.

ITL: Will any of the scrapped material prior to Twerp Verse be released at some point, or was that material more a stepping stone to where you are now?

SD: Two of the songs came out on a free 7” which is bundled with the deluxe edition of the record. Two of the songs will be bonus tracks for the Japanese edition. The rest are TBD but we tend to contribute to a lot of compilations and things like that, so I don’t anticipate them not seeing the light of day.

ITL: You come from a writing background, and while every type of writing is a bit different, do you find that your videos and album packaging (the chapbook with Foil Deer, the cover art for Twerp Verse) reflect the content of your songs, or vice versa?  How do you find your other artistic endeavors influenced by your songwriting, if that makes sense?

SD: This record is darker and angrier than some previous Speedy records, I think because the stakes are higher. I’m writing about massive issues in our country that of course impact me but significantly impact the lives and well-being of A LOT of people. At the same time, it’s our poppiest and brightest sounding album, because I wanted to write about these subjects from a place of optimism, and in a way that inspires listeners to feel like they can do something. “Lucky 88,” for example, is probably our poppiest, happiest sounding song but it’s about feeling disappointed with the Democratic party’s moderatism. It also celebrates young activists who have really pushed for more progressive candidates in local elections. So there’s a double-edged coin there–disappointment and hope–and we tried to honor that dualism in the art for the record and the music videos by making them colorful but wry.

ITL: What are your favorite songs from the new record to play live?

SD: “I’m Blessed” has been a group favorite for sure, there are a lot of changes and it keeps us on our toes. I played a lot of synths on the record but am playing those parts on guitar through synth effects pedals live–”Lucky 88” and “You Hate The Title” are fun for that reason.

ITL: You’re a big fan of TV. If someone had to play you as a character on a TV show, who would you cast as yourself?

SD: Lizzy Caplan would be my first choice!

ITL: Good call! And finally, What words of tour wisdom would you like to pass along to your Chicago fans?

SD: Buy easy to prepare groceries to save money, and try to eat fresh fruit and veggies when you can for the sake of your digestive system! Plenty of water, and take some probiotics! The most boring tour advice ever.

For more on Speedy Ortiz, the current tour and latest album, click here

For tickets to the upcoming show, May 12th, at SubT, click here

The Final Vans Warped Tour Ever Underway, Is This Really The End? Homecoming Show For Rockers, Fairview, As Their Return To Chicagoland To Play Berwyn's Wire