Chicago Artist : My Life With The Thrill Kill Kult 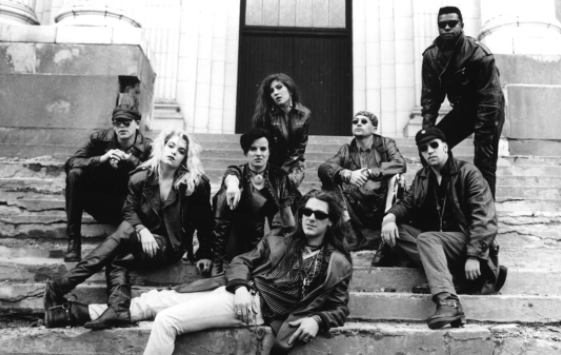 Frankie Nardiello (Groovie Mann), and Marston Daley (Buzz McCoy) met in the Spring of 1987 while touring together with the band Ministry. Soon after, Nardiello and Daley began to conceive an art film to be called My Life with the Thrill Kill Kult – a headline taken from a British tabloid Nardiello had noted a few years prior when he lived in London. The film was never completed, but the music they had recorded for its soundtrack appealed to Wax Trax! Records, who released the completed songs as a three-track EP.

Dubbing themselves Groovie Mann (Nardiello) and Buzz McCoy (Daley), they launched My Life With the Thrill Kill Kult. When the first EP sold well, a full-length album, I See Good Spirits and I See Bad Spirits, followed in 1988. Both attracted attention from college radio stations and dancefloors, as well as religious groups who balked at the overtlyoccult imagery in both the music and the artwork of the releases. The group continued to stoke controversy with each subsequent release, which included a remix EP entitled Nervous Xians, and they became even more popular with release of the 12-inch single “Kooler Than Jesus”.

Thrill Kill Kult’s second album, Confessions of a Knife…, became one of the best-selling releases on Wax Trax!, and continued to goad parental groups with song titles like “A Daisy Chain 4 Satan” and “Rivers of Blood, Years of Darkness”.

Along with labelmates Ministry, KMFDM, and Front 242, Thrill Kill Kult helped develop the industrial music genre, but they themselves continued to evolve, creating a sound that was not easily identified or categorized. It was electronic club music with heavy beats, reminiscent of both disco and funk, yet amplified to a sometimes abrasive level. Thrill Kill Kult reflected a shift where dance records could be ominous and aggressive, and they laced their music with riffs and references that would seem more at home in a heavy metal group. One of their most distinctive characteristics is their use of spoken-word samples lifted from B-movies and other sources.

At the onset of their career, the band’s music was known as having a “satanic” theme, although used in a satirical sense. The occult element of the band has moved to the background in recent years, as they have focused more on their sleazy disco sound although still laden with satire. The 1991 album Sexplosion!marked TKK’s leap toward more psychedelic house beats and their later grind house lounge sound. Later albums expanded on these sounds and explored new directions as well, such as the 1995 Interscope release Hit & Run Holiday, which combined the Kult’s signature electronic sound with a psychedelic surf rock/go-gotheme reminiscent of 60s garage rock and more modern acts like The B-52’s.