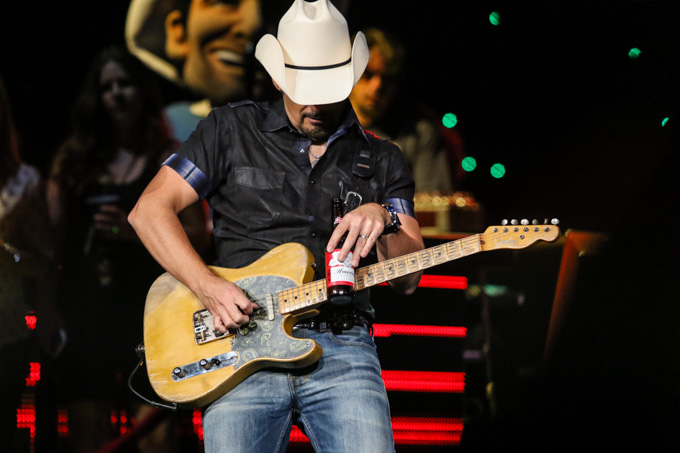 Country fans rejoiced when guitar virtuoso Brad Paisley announced the he would be making a stop at the Hollywood Casino Amphitheatre in Tinley Park.   Accompanying Paisley on the Life Amplified tour are Maddie and Tae along with Tyler Farr.

Paisley took the stage just shortly after 9 p.m. with a great video into that was comprised of clips of Chicago and its skyline and opened the show with the song “Crushin’ It”. Paisley is known for being tech-savvy and incorporates that idea into his shows in many different ways. Behind Brad was a huge projection screen which featured a variety of videos and some interesting backdrops and effects. A few times I found myself watching the videos than watching Brad. When it came to the song “Country Nation” Paisley hit it out of the park by including football game clips of the University of Illinois, Northwestern University, and Notre Dame as well as clips of the college towns.

For upbeat songs like “Moonshine in the Trunk” Paisley and the band shared the spotlight with one another and were individually introduced. But for the more serious songs like “This is Country Music” and “Waitin’ On a Woman”, Paisley made a pretty seamless transitions by beginning the songs on a stage extension in the middle of the crowd, alone on acoustic guitar. After playing the opening riff of the song he then took out a sharpie, gave the guitar his signature and handed it to an ecstatic young girl in the crowd.

Paisley closed the show with the song “Mud on the Tires”, and embellished the song with a few impromptu solos. For his encore, Paisley played his hit feel good song Alcohol. As soon as he played the first note the arena erupted with cheers, fans swaying and singing to the music. Of course on the song was accompanied with a video of a beer being poured into a frosty glass.

From the eye-popping visuals, to the expressive guitar work, and the down to earth and joking attitude I would highly suggest seeing him in concert.