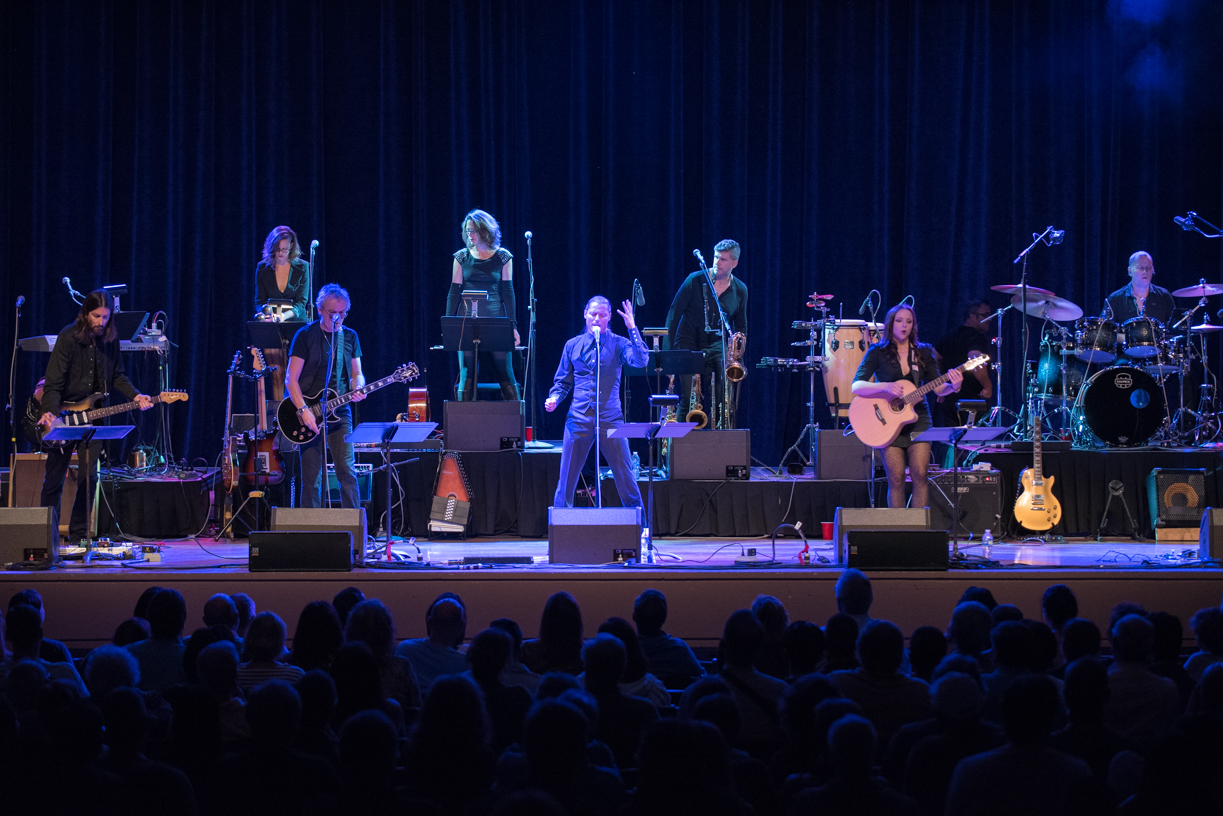 Classic Albums Live, is a Canadian supergroup of sorts who specialize in performing well, classic rock albums live. Their motto, Note for Note, Cut For Cut. They’ve been doing this since 2003 and have covered just about every top 40 classic rock album live around the globe- everything from the Beatles to Zeppelin. This show marks a return for the band to Ravinia as they perform David Bowie’s classic 1972 album, The Rise and Fall of Ziggy Stardust and the Spiders From Mars.

The bands organizer, Craig Martin, brings in members from all around as they have an arsenal of musicians, at last count around 250 members both local and international. They tailor each performance around the proper musicians who can replicate the sounds not just close, but precisely. The same sounds, effects, intonation and replication of the original.

Tonight’s group consisted of eleven members who played an entire studios worth of instruments and sounds on one stage without fail or pause. Led by lead singer and fine Bowie impersonator, Nick Walsh.

At first glimpse, several members of this group look familiar, not so much from musicians we know from the music industry, but from the Denis Leary FX show, Sex & Drugs & Rock & Roll. Stage left looked like members from the show that included the guitarist girl, Tara McLoed, who looked like Leary’s daughter / signer of his show, Gigi (Elizabeth Gillies), the drummer for CAL, Troy Feener, looked like Flash (John Corbett) and the bass player Mark Stewartson, looked like well, the bass player (John Ales). And this is in no way a bad thing, just something that was strikingly noticeable and pointed out by two people around me as I was reviewing. I had to agree. The rest of the band didn’t stand out to a resemblance to anyone else so much, but they all were amazingly talented musicians and included Amanda Penner on violin, Alex McMaster on cello, Lindsay Clark on keyboards, Des Leahy and Rob Philips on guitars and Braxton Hicks on horns.

As the performance began, the group starts off the night with the opening track off the album with, “Five Years”. It seemed singer, Walsh, was trying to find himself and had one reviewer worried how this was going to pan out, but after about one minute into the song, he soon found his legs and voice and it all just gelled. No more worries from this point on.

They continued on through the entire album Bowie fans have come to love for the last 40+ years without speaking or hesitation, besides the normal amount of empty space between tracks. If the CD/album had a song the had only 4 seconds between one song and the next, that’s how they did it. If a song faded out, they recreated that as well. It literally was as they claim, note for note, cut for cut.

The audience was slightly timid or reserved tonight as 99% of them stayed in their seats. No one danced or jumping up for praise right away. It was like they were all in a shock and awe as to what they were experiencing. It was like someone hit play on the record and they just sat back and chilled to it.

That’s not to say there weren’t outbursts of applause or spontaneous shouts of joy. Especially on the hits. When they played the big hit tracks like “Starman”, “Ziggy Stardust” and “Suffragette City” it was made clear the fans where there and indeed enjoyed it. Several people stood up and applauded in between tracks, but because it was just as the album played, very short lived.

After the final cut played, “Rock n Roll Suicide”, a deep cut fan favorite, they finally broke out of character and silence. Singer, Walsh announced they would be back after a short break to play through more classic Bowie hits. And after about thirty minutes, they came back and did just that and this is when the fans really came to life. They sang along with and danced until the show ended around the ten o’clock park curfew.

This night marked the end of rock concerts at the park for this season. Only leaving a hand full of shows mainly children’s performances and a Hispanic group to officially close out the 2016 season. This was a great end to the years rock n roll spirit leaving us with hope and wonderment as to just what will the “Rise” of 2017 season bring. It Ain’t Easy, but until then, we’ll just have to wait and see, so Hang On To Yourself people and Let’s Dance again next summer.