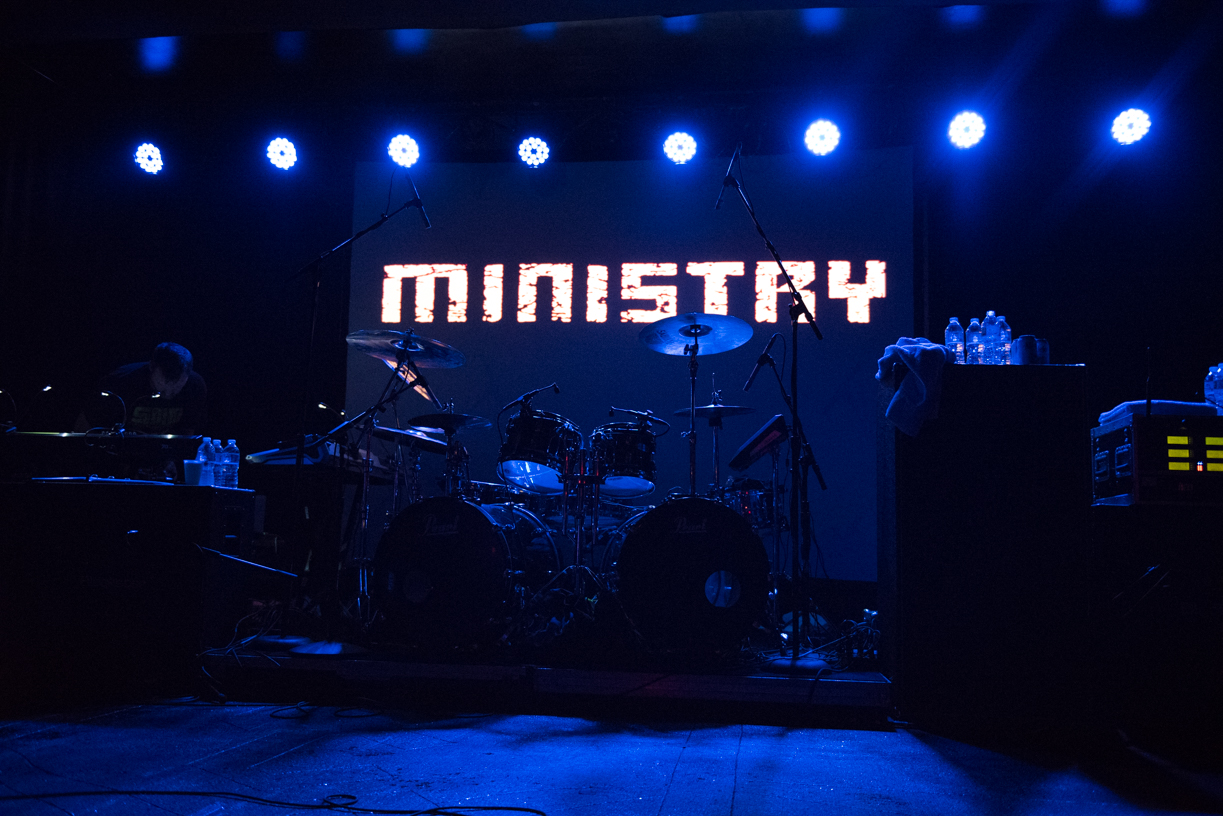 Ok, so we’re deviating from the norm here with a new series we’re calling, In The Loop Magazine, On The Road (ITLM OTR). This is the debut feature for this great new addition. This is a where we go outside of the Chicago area and review a story about a Chicago artist on the road.

Ministry and more specifically, Al Jourgensen, is the subject of our first new featurette.

Al Jourgensen and Co. took the machine that is Ministry out on the road again for another one off show. This time in Sin City- Las Vegas. The perfect setting for such a deboucherous band.  This was in support of an annual event dubbed, Punk Rock Bowling & Music Festival. 2016 marks the fests 18th anniversary. Ministry opened the multi day, multi venue festival and headlined the night at the Fremont Country Club.

It was a mid-sized club that quickly sold out. FCC was literally packed to the rafters with punks.  Fans from all around the US showed up for this one. We ran into folks from NYC to Los Angles and of course a few from their home town, Chicago.

We soon learned this wasn’t just any ol’ Ministry show. This was something special. Jourgensen had grandiose plans that worked out wonderful. Of course we heard some classics, a couple this century tracks and even a some covers, but that’s where the usual ends.

After the main set was complete, the band appeared to be done. They walked off stage, but the lights and sounds continued. The band came back out, this time  all wearing gas masks. Jourgensen came out last walking (with martini glass in hand) to the song, I’m Invincible, off his latest project, Surgical Meth Machine (SMM). Thats right, we finally get to hear this new project live and in person. He’s also joined by N.W.A.‘s original co-founder, Arabian Prince, who manned two turntables and a microphone.

But that wasn’t it! This is Vegas after all, so bring out the show girls! Joining the band on stage were several burlesque dancers grinding to the beats.  There was even a bit of theatrics with Jougensen’s costume change into a purple lounge axe suit and for a brief moment, welding a bong in hand. Going with the flow, we get another track off SMM as well. The DEVO cover of Gates of Steel. As far as I can find, this was the first time this song was ever played live.

Jourgensen’s vocal and demeanor were right on point. He was energetic, wide eyed and fully capable of commanding his voice and instruments. The rest of the band was just as tight. The energy was hot in this room. The fans definitely appreciated it. The feedback they gave only fueled the Ministry fire up even more.

Ministry was played off by DJ Arabian Prince mixing up a few tracks from the Surgical Meth Machine album. Jourgensen introduced the band, thanked everyone for coming out and said, “See ya later folks” “I’m gonna go smoke some pot.” Then strutted off stage right. Arabian Prince continued on with more songs from the album before fading the show out to black.

This was without a doubt, the most unique and energetic Ministry performance in a very long time. Missing this one would have been a shame for this reviewer. For those of us who caught it, we’ll never forget it. For those who missed it, no fret, check below for samples.

Jourgensen said, “Where else can you do this kind of show? This is Vegas. We’re going to put on a Vegas show!”

If you missed it, or just want to relive it, click here for photos from the show

For even more, check out a couple live videos from the show here

Ministry will be out again this year for more one off shows. To find out when and where, click here