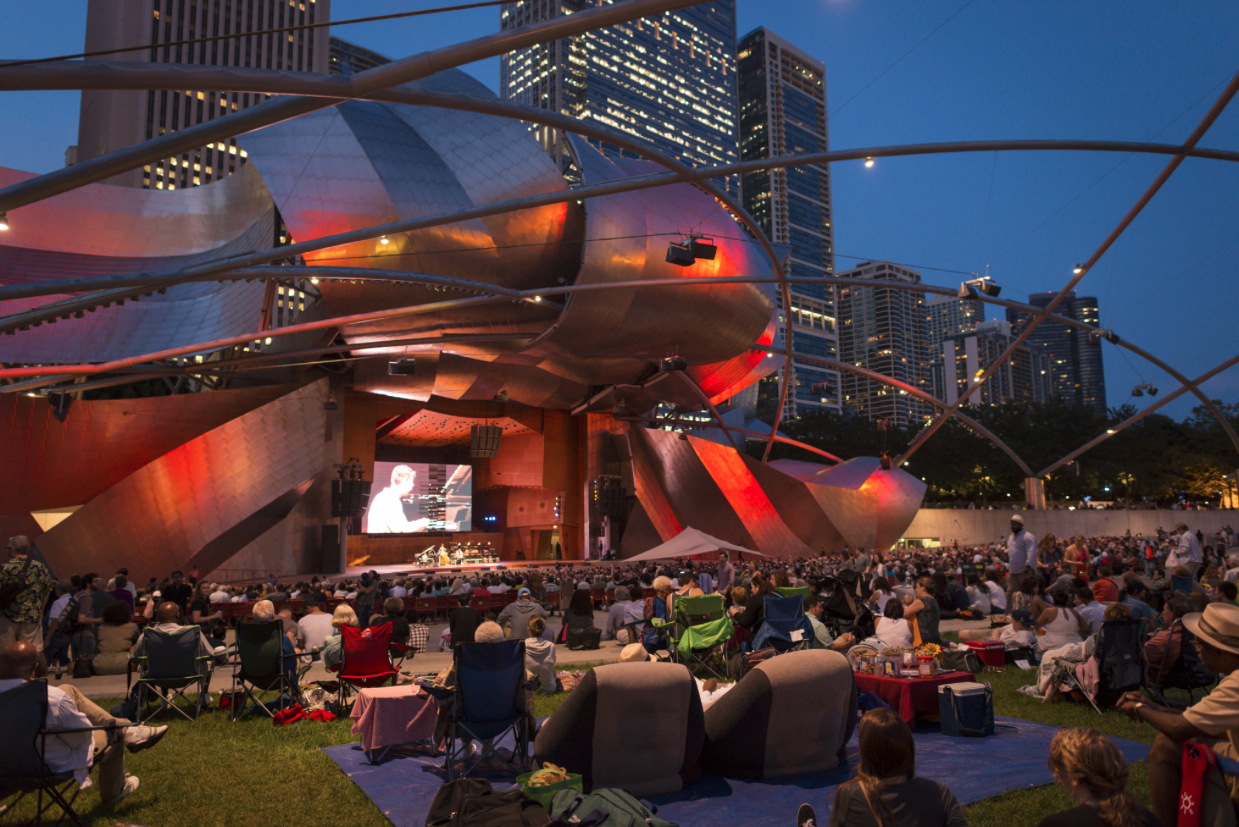 The Chicago Department of Cultural Affairs and Special Events (DCASE) is pleased to announce the 38th Annual Chicago Jazz Festival. The Labor Day Weekend tradition will take place in Millennium Park and at the Chicago Cultural Center (78 E. Washington Street) September 1-4, showcasing the greatest jazz artists from Chicago and around the world. The FREE admission Chicago Jazz Festival is produced by DCASE and programmed by the Jazz Institute of Chicago (JIC).

The Chicago Jazz Festival has always taken pride in celebrating the full spectrum of jazz with a special emphasis on the city’s unique place in the music’s artistic development. This year’s programming takes a special look at that history while celebrating the artists, events and moments that continue to shape jazz today.

In addition to these still-thriving greats, this year’s festival will look back at some of the legends that the jazz world has lost in recent years. Irreverent trio The Bad Plus will perform the music of Ornette Coleman’s 1971 album SCIENCE FICTION with saxophonists Tim Berne and Sam Newsome and trumpeter Ron Miles. Composer/arranger Carla Bley will lead the Liberation Music Orchestra, the politically-charged ensemble founded by late bassist Charlie Haden, with in-demand bassist Scott Colley filling Haden’s shoes. Rambling Boy, the 2009 documentary on Haden, will also screen as part of the festival.

The year 2016 marks the centennial of the Great Migration, the mass movement of more than 6 million African Americans from the rural South to the urban Midwest, Northeast and West that took place  beginning in 1916. Chicago was a key destination for that transformative relocation, with a momentous impact on the development of jazz as a vernacular music from New Orleans and transformed into an industry in Chicago.

That history will be marked in several ways throughout this year’s festival, most notably in the premiere performance of “Soul Migration,” a sweeping new piece by Chicago trumpeter, composer and bandleader Orbert Davis commissioned by the Chicago Jazz Festival that will headline opening night on Thursday, September 1. Davis’ piece will trace the route of the people and the music that made the trek northward with a suite that takes listeners on a moving journey of their own, with Davis leading an expanded quintet on a bold multi-part work that marries words and music, electric and acoustic sounds, North and South, present and past.

Doreen’s Jazz New Orleans, led by full-throated clarinetist Doreen Kitchens, exemplifies the source of the musical river that wound its way north, while Brian Carpenter’s Ghost Train Orchestra resurrects some of early jazz’s seminal composers, including Chicago legend Tiny Parham, Fletcher Henderson, Fess Williams and Charlie Johnson. Among those who made the northward trek into jazz renown are legendary guitarist Charlie Christian, who will be the subject of a tribute concert by Chicago axeman John McLean and his six-string-centric ensemble Guitar Madness; and living legend Harold Mabern, who began life in Memphis in 1936, will celebrate his 80th birthday in his longtime home of Chicago with the quartet he co-leads with torch-bearing saxophonist Eric Alexander.

Once Chicago was established as a key destination for the Great Migration, the city became home to generations of jazz giants, including tenor greats Gene Ammons, Johnny Griffin and Eddie Harris. Saxophonist Edwin Daugherty, who has played with the likes of Barry White and Roberta Flack, will pay tribute to all three with tenor titan Ari Brown and storied saxophonist (and bagpiper) Artee “Duke” Payne at his side. Another is the late singer, songwriter, poet and playwright Oscar Brown, Jr., a true renaissance man and an impassioned civil rights activist. With their project Brown in Bronzeville Effect, daughters Maggie & Africa Brown will, like their old man, sing out in the name of freedom.
This year’s line-up will also feature a wide range of nationally recognized talent: trumpeter and New Orleans native Christian Scott aTunde Adjuah; drummer Barry Altschul, a key figure in ’70s avant-garde jazz; Israeli-born saxophonist/clarinetist Anat Cohen; tenor saxophonist JD Allen; and the raucous trio Tarbaby, featuring drummer Nasheet Waits, pianist Orrin Evans and bassist Eric Revis, with special guest Oliver Lake.

The festival will also provide the opportunity for audiences to appreciate a few of Chicago’s under-sung living legends, including pianist Erwin Helfer, who will mark his own 80th birthday with a solo performance at this year’s festival; drummer George Fludas, distinguished veteran of the local club scene; drummer Greg Rockingham, founding member of the late, lamented Deep Blue Organ Trio; and veteran pianist Norman Simmons, fondly remembered by fans of a certain age for his stints at the Beehive on 55th Street, where his trio backed the likes of Charlie Parker and Lester Young.

Chicago’s deep pool of respected straight-ahead talent will also be well represented at the festival: organist and pianist Dan Trudell; Eric Schneider and Pat Mallinger, co-leaders whose soul-bopping tenor saxophone riffs evoke the ultimate Chicago tenor pairing of Gene Ammons and Johnny Griffin; trumpeter Pharez Whitted, who has performed with the Chicago Jazz Ensemble and directed jazz studies at Chicago State University; and Brian OHern and the Model Citizens, who celebrated their twentieth anniversary as one of the city’s feistiest club attractions this year.

The city’s adventurous reputation is spotlighted as well: tenor saxophonist Nate Lepine has

been a member of three of Chicago’s most creative, forward-looking bands – the NRG Ensemble, Herculaneum and Poi Dog Pondering; Magic Carpet, the groove-based, improvisational electric band that describes itself as “AfroMiddleEasternJazzFusion;” the MIYUMI Project, led by Tatsu Aoki, founder of the Chicago Asian American Jazz Festival; violinist James Sanders’ improvisational Proyecto Libre; drummer Michael Zerang & The Blue Lights; Cameron Pfiffner’s Adolphe’s Ax, named in honor of the inventor of the saxophone and incorporating Gregorian chants and French Renaissance music; and AACM member Mwata Bowden’s One Step In, One Out…

This work was commissioned by Duke Performances at Duke University.