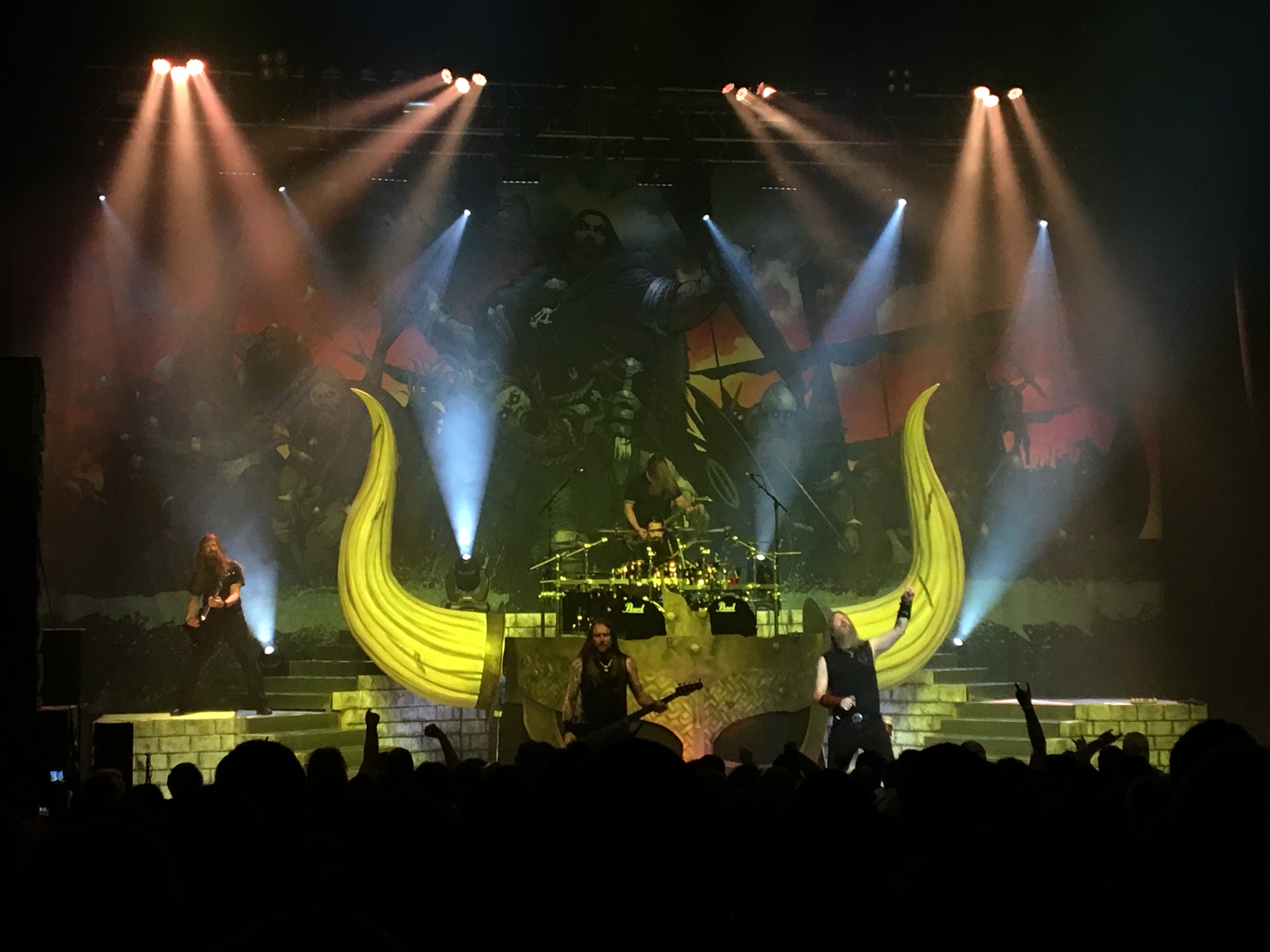 Metal acts come and and go throughout time yet there are the very select few that continue to create an impact on the industry and continue to release amazing work with each album. Sweden’s own Amon Amarth recently “pillaged” through Chicago on the Jomsviking North America Tour alongside fellow Swedish metallers Entombed and American metallers, Exmortus. Overall, a night full of historical and barbaric metal tenure, Amon Amarth certainly left their own mark upon the midwest.

Supporting their latest successful album release, Jomsviking, Amon Amarth brought not only intense affairs but superb stage presence in addition to an amassing and strikingly Viking style stage set-up. Honoring the Jomsvikings, a Viking mercenary order that dates back to the 10th and 11th centuries, the album is the first concept album in the group’s twenty-four year career. Telling the tale of a young Viking warrior, he falls in love with a girl and his love being unrequited, the girl is married off to another in which the young warrior commits murder, is exiled and vows to take revenge on those who took his love away. Through the eyes of this character, the album gives the listener an insight into the lifestyle and times of the Jomsvikings.

The night comprised of tracks from nearly almost all their albums, with the vast majority in support of their latest masterpiece, Jomsviking. Bringing in an entrance that surely will give just about anyone a chill down their spine, the group opened with one of their most famous tracks, The Pursuit of Vikings. The Chicago masses wasted no time in pushing to the front of the sold out show at The Riviera. With perhaps the best stage set-up of any metal band out there today, within seconds all eyes gazed upon the massive Viking helmet emblazoned with horns in which the drum-set sat upon. Stairways to the right and left that led to the back of the stage, behind the Vikings helmet, a killer backdrop that showcased the mythical giant, Surtr, from the group’s album Surtur Rising, fog machines, spectacular lighting and more, Chicago experienced metal bliss.

Other tracks of that night included the barbaric First Kill, as well as Deceiver of the Gods, One Against All, Destroyer of the Universe, Death In Fire, War of the Gods and a handful more. Something that no metal act really does, the group brought out actors to re-enact the Viking times, full-fledged in swords, arrows, shields, helmets, the proper attire, that only made the night even more intimate and realistic. With arrows pointed at the crowd during the track, One Thousand Burning Arrows and swords wielding high during Father of the Wolf, this was a rare visual treat for Chicago.

An encore was set in motion with the remainder of the tracks included Raise Your Horns, in which a toast to fellow metalheads was issued appropriately with the Viking drink of choice, beer. Guardians of Asgaard and Twilight of the Thunder God closed off the epic night, leaving the Chicago crowd full and satisfied of metal. With one final ‘Thank You’ and a bow, the night brought forth the era of the Jomsvikings and Vikings overall back to life.

For More On Amon Amarth, including current tour and latest album, click here