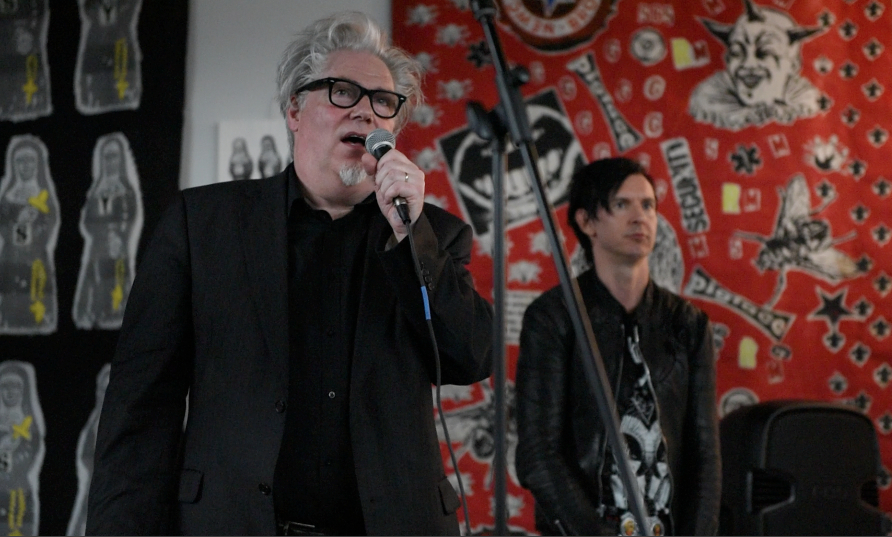 Pigface turns 25 this year and with that, there was an exhibit to celebrate that milestone. Thursday night at Fort Knox Studios, Martin Atkins hosted the finale in the 2112 offices and gallery space. It ran for a month in that space and in that time many things were seen, heard and smelled. Tonight was the biggest news of all as Atkins gave a heartfelt speech thanking everyone for making this happen and raised a glass to toast loved ones lost. The news was of course that Pigface will be playing a concert together again.

The news of this brought the room to a collective cheer. He went on to say that it was still in the works, but definitely going to happen before the end of this year, here in Chicago, and is tentatively scheduled for Black Friday.

Tickets are not available yet, but check back with us often to find out when they do.

Atkins said, “So, I didn’t really think this through, but being around all this had an effect on me.” “I’ve talked to a bunch of people already, too many people, but we’re going to have some great friends join us.” He had a conversation with James Murphy of LCD Soundsystem about it, he can’t make it, but he said it was an interesting conversation that helped develop this even more. He then went on to lay out who all is going to join him at this show and it already appears to be an incredible one including trumpets, bagpipes and a cow on stage.

Not playing live for some time now, Atkins also added, “I need to sit down and play my drums again to be able to get like half way through a 4-hour Pigface set”.  He then thank everyone for coming out saying, “Thanks for celebrating this weird, weird shit. It doesn’t make sense. None of it makes sense. It’s the only thing that makes sense.”

Several past member names were talked about and even a couple new, but no one finalized yet. More on that coming soon!

For a video clip from the night, click here

For more news and info on PigFace, click here

For photos from the Opening Night Gala for Pigface 25, click here