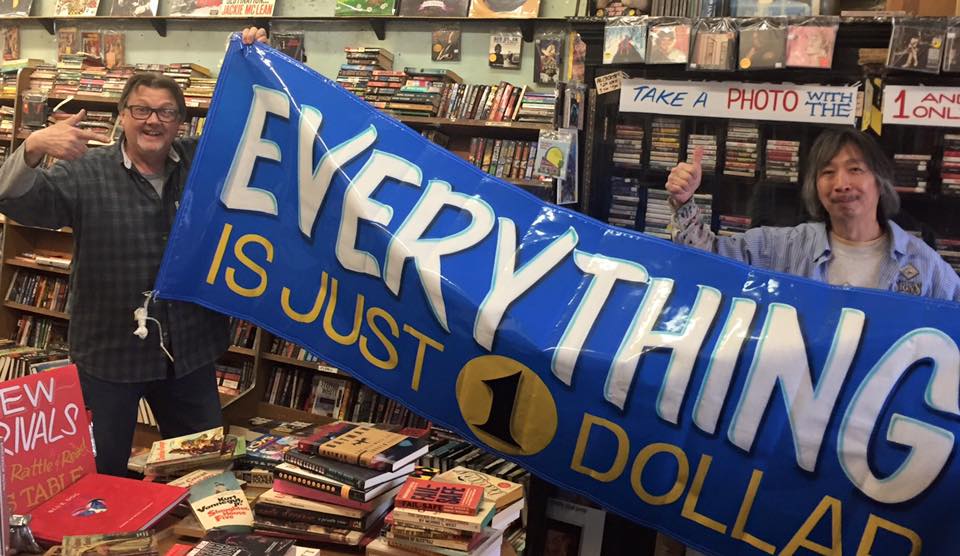 There is a special place in Uptown for music and book lovers that will soon be gone forever.  A place that for 50 years has welcomed in Chicago and traveling through guests to it’s eclectic inventory and honorable host’s humble abode. Shake, Rattle and Read / Book Box has been a neighborhood establishment on Broadway for over five decades, but as of May 22nd, 2016, it’s doors will close forever leaving another gapping whole on the historic block.

Ric Addy has been working with Shake Rattle & Read (AKA Book Box) since the mid 1970’s.  It’s been a family business since 1966 when his sister started it.  Addy moved to San Francisco in the mid to late 60’s. Just shortly after his sibling opened it’s doors. He was looking for something more. Always a collector and music buff, he came back to Chicago in the early 70’s and his sister asked him to take over. He did and grew it into something that most Chicagoans have come to treasure.

Shake Rattle & Read is located right next to the historic UpTown Theatre. Literally attached to the same supporting southern wall. It’s been closed for years, but Addy remembers it fondly. “I saw the original Star Wars there.  There was always something great happening there weather it was a movie or live show.”  He talked about how being in the location they are in was key to their success. Surrounded by great venues like the Uptown but also The Aragon and The Riviera Theatre – the trifecta. Once the doors of the UpTown closed, he saw some decline, but the others in the area kept foot traffic going. Two doors down from him is also The Green Mill.

Addy remembers many famous folk shopping at his place. “Frankie Nardiello (AKA Groovie Mann) from My Life With The Thrill Kill Kult use to come in here and buy magazines and papers to make art from them.” Said, Addy. “He wasn’t the only one. We’ve had The Ramones in here, members of Ministry, Iggy pop and Billy Corgan as regular guests.” Also noted, Sean Lennon (who bought several old copies of Rolling Stone Magazine as a gift for Yoko Ono), Joe Strummer of The Clash, Ed Paschke (a favorite haunted for the Chicago based artist), Kurt Russell, David Schwimmer, Foo Fighters and countless others as many decades. Even actress Kathleen Turner stopped in several times while filming V.I. Warshawski next door at The Green Mill.

Addy has been involved in music and the arts all his life. He’s a DJ, a musician in his band, Iggy Yoakam and avid music collector. He loves going to live concerts and events not just here in Chicago, but will travel for some of his favorites. He worked at other record stores like Downtown Records in the loop and was a manager for the Record Exchange in Evanston before he bought the store from his sister. He worked with Al Jourgensen at one record store.  He was invited to DJ for the Smashing Pumpkins final party in Longan’s Square back in 2000.

His store is a place that is well known in the industry. VH1 came in and bought more than 2000 vintage Rolling Stone magazines for a Tom Petty documentary. Several movies have been shot in the area and those film crews end up shopping in the small, packed to the gills store.

This is also a story about how the community rally’s in support of him. He has regulars like George. A man who I met the day of this interview. He has been a loyal, longtime customer for many, many years. He’s said, “The neighborhood just won’t be the same without him”. A sentiment overheard many times throughout the day as many customers paid for their soon to be last ever purchases.

“It’s time” said Addy. “I’ve been doing this for a very long time. I said I was going to retire at a certain age and that has come. I wanted to keep this place or at least name going, so I tried to sell it, but we ran into problems. The current landlords own the block. They need a certain amount to keep things running. I’ve been fortunate to have kept a lower rate than most, but with a change over in ownership, they will be raising the rent a lot.” He went on to say, “I had the place sold to a young couple. They wanted to keep it right here, but with the rent increase and the neighborhood going the way it’s been going the past few years, backed out. I don’t blame them, but would to have liked to at least see the name go on even if they moved it somewhere else. I mean, It’s a pretty established name that been around a long time. You can do something with that alone.”

Addy is retiring, but not 100%. He moving to the warmer weather of Florida where he will be helping a friends store out with online sales. Something that his is a master at. He has a “Top Seller” rating on eBay and has been doing it for a long time with an excellent rating as well as an Amazon store. Something he’s also very proud of. It’s a second, very efficient and lucrative business that lives in the basement of Shake Rattle & Read. Just next to his band practice room and former infamous, underground tunnel entrance. Once he leaves, there will not be room for this in his current or new place. He friends place is not up to speed with web sales, so he’s going to get that going for him part time just to help him out and still have a little fun with something he knows very well.

For now, you still have time to witness and visit this Uptown landmark.  The final day will be May 21, 2016. The day I was there he announced to the store that everything from this point on was going to be just $1! Something that no one really believed until we go to the register and he rang it up. Yep, everything except brand new sealed records was just $1. That includes everything in this amazing store like used records, books, magazines, comics, cassettes, 8-track tapes, VHS bootleg concerts, collectables, store fixtures and more.

Come in and show your support and love from now until May 21. You never know what you’ll still find in those hidden boxes of treasures. Addy said, “And I still have a lot more to still bring out from the basement and back rooms too!” And make sure you get a picture with Ric in front of his signature spot!