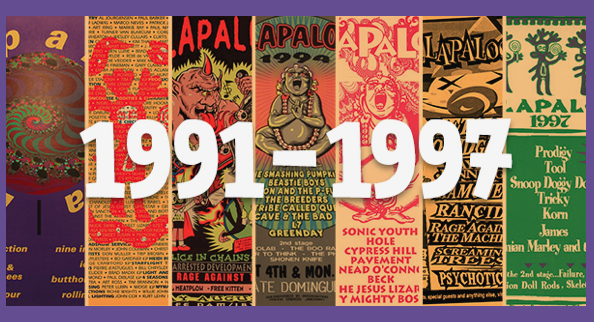 Hard to believe, but 25 years ago the most outrageous and longest running festival was born.  Founder and event organizer, Perry Farrell, had an idea of a music and arts festival that brought people together from all areas of youth culture. Something that promoted the unique, the strange and the alternative in one place for all to see. A chance to see and hear things you might not normally experience, from artists not in the main stream.

In 1991, Lollapalooza was launched to the world and meet with huge accolades. It started with iconic acts such as Jane’s Addiction, Siouxsie & The Banshees, Living Colour, Nine Inch Nails, Fishbone, Ice T & Body Count, Butthole Surfers and Rollins Band / EBN / Violent Femmes at certain locations. It was a way for Farrell to send off Jane’s Addiction but also to be an annual event that brings new and exciting music to the world.  This form of the festival was different than what we know today, but still had the same heart, soul and conviction. It ran in that form from 1991 – 1997 before taking a hiatus and coming back reformed in 2003. It picked up where 97 left off but in 2005 was retooled as a stationary event with Chicago as it’s new home.  Today, the festival is held at Grant Park in the US and expanded world wide to Chile, Brazil, Argentina and most recently, Berlin.

Lolla ran as a traveling festival that toured the United States and Canada only. It was just a one day event. What they packed into a single day, traveling event was pretty amazing. I still can’t imagine the logistics of it all. I was there since the beginning and have seen it all unfold first hand.  I’ve seen the original idea and concept come to life, go through changes and what it’s become today. It truly was a spectacle to see and experience with its multiple stages, vendor and dealer booths, food and drinks choices and the varied bands playing.  Some you’ve never heard of that end up later being one of your favorites. There was so much more than just great music, by circus side shows, art exhibits, social and political movements and of course the social interactions with other like minded music fanatics. That’s what made it work.

To mark this historic occasion, Lollapalooza has a few things planned, including extending the event into an even larger celebration by adding a 4th day. The festival will start on Thursday July 28th and run until Sunday July 31st, 2016.

Lollapalooza is asking you, the fans, to help celebrate the milestone by posting and sharing your memories on their sites. You can share photos of your time at a past show from another city, post that picture of bile you got from the Jim Rose Circus Side Show that Eddie Vedder of Pearl Jam drank, show off the early ticket stubs, pose with your 1991 concert t-shirt or posters on your dorm room wall. Even if you don’t have anything to share, it’s worth visiting the tribute pages to see the history fans are posting. I myself have a ticket stub, concert t-shirt (that I for some reason can’t fit into anymore, I’m blaming washed to many times), souvenirs, magazines and photos. (all of which you are viewing in this article.)

My personal favorite year was 1992.  Don’t get me wrong, the first year was monumental for so many reasons, I still can’t get enough NIN or Jane’s Addiction, but ’92 introduced me to several new artists I only heard on college radio, but never really knew. Ministry and Lush were the two that blew my mind.  I remember Ministry coming on and thinking, “Who the hell is this!?” I stopped what I was doing and walked as close as I could get to see them and watched the entire performance like a dog waiting for a bone.  When Al Jourgenson and the boys finished, I was hooked for life.  I went to Tower Records and bought everything I could. Same goes for Lush.  Another band I had heard and liked from the song I knew from the radio or MTV video, but after seeing and hearing them live became a life long fan. (So glad to see them back this year)

Here is a link to those memories that they are promoting as “25 Days Of Lolla”.  If you have anything to share, please do.  Fans like me are eating this stuff up. We want to see what we remember as true music history. Even if you don’t have anything to share, take a look. There is a history there older than most of the fans have been alive. See what you missed.

This is a sample of my collection of early Lollapalooza stuff. Yes, I’m old, but I still look forward to it every year… and I still collect. #MyFirstLolla

For more info on Lollapalooza 2016 (the 25th Anniversary) including tickets and this years line up, click here

Cradle of Filth Bring The ‘Hammer of the Witches’ Down on Chicago Ravinia Announce 2016 Line Up That Includes Bob Dylan, Hollywood Vampires & Duran Duran