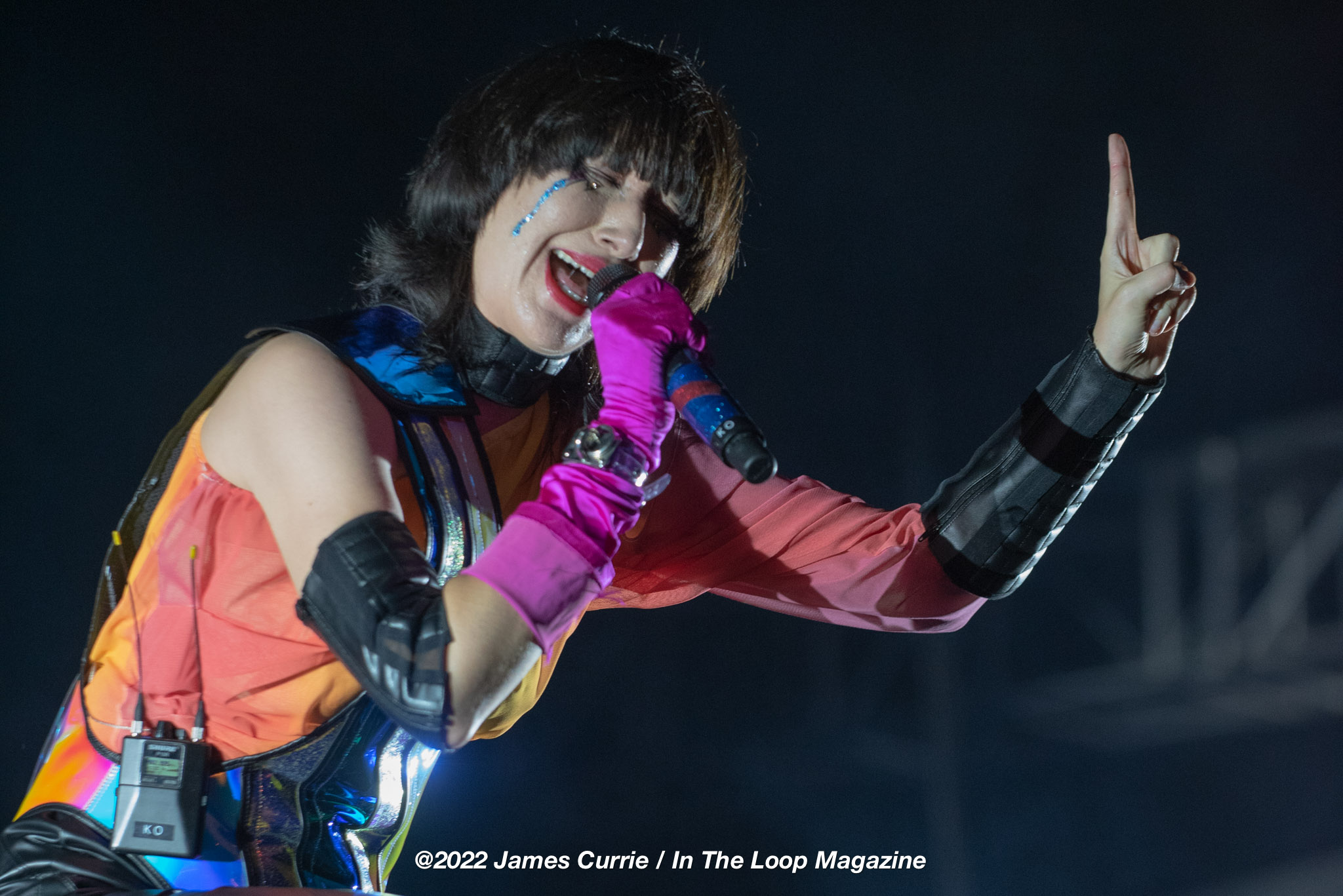 The final day of Riot Fest 2022 was a cross-section of just about everything that makes Riot Fest great (despite the curious absence of metal bands this year), starting off with the raucous indie pop of The Linda Lindas.  The L.A. quartet—none of whom are over eighteen years old—have made a huge impact over the course of the last year, and judging from their set, they’re not going anywhere any time soon. Calling to mind the poppier of the riot grrl and alt-rock bands of the ‘90s (the underrated Jale and Velocity Girl, to name some), only a group this skilled in the art of melody and energy could play a garage rocker about a cat (“Monica”) that nearly incites a mosh pit.

In a fun parallel (and on the same stage, no less), Cali-punk veterans the Lunachicks offered more years in the game but just as much energy in an hour-long set that saw vocalist Theo Kogan arrive onstage in what can only be described as a neon-pink prom dress.  Opening with “Bad Ass Bitch” from 1999’s Luxury Problem, the ‘chicks offered the first of many pleas on Sunday to vote in favor of women’s and abortion rights in November, though the set had its lighter moments as well (“The Day Squid’s Gerbil Died” being one of the obvious highlights).

Jimmy Eat World are no strangers to Riot Fest, which is why it was something of a surprise to see half the field in eager attendance for the Mesa quartet, though a welcome one.  The band’s set was nothing short of an indie rock masterclass, and hearing alt-rock radio classics like “A Praise Chorus,” “Sweetness,” “The Middle,” and “Lucky Denver Mint” alongside brand-new single “Something Loud” (a very promising look at what may be coming down the line) was a true testament to the band’s staying power.  Vocalist Jim Adkins sounds as passionate as ever, and his heartfelt thanks to the massive crowd for supporting live music again was something everyone could agree on.

Sleater-Kinney have been around long enough to occupy that curious place in indie rock culture where newer fans might not release the extent to which the Portland trio were feminist, post-punk upstarts, which made the absence of deeper, punchier cuts (a quick dip into Dig Me Out and nothing The Hot Rock? At all?) A bit curious given that Riot Fest is…well, Riot Fest.  Nevertheless, guitarist/vocalist Carrie Brownstein—herself something of a cultural presence outside of the band—and guitarist/vocalist Corin Tucker threw everything they had at the afternoon crowd in a career-spanning setlist that featured an impassioned plea to write women’s rights into the Constitution.  While “Bury Our Friends” and “All Hands on the Bad One” were vigorous, crunchy stompers, the setlist offered some quieter moments as well, like set closer “The Center Won’t Hold.”

Fitting, perhaps, that the best set of the weekend was a part of Sunday’s headliners.  NY art-rock trio the Yeah Yeah Yeahs—something of a unicorn in the current touring world, as the band has largely eschewed full tours over the last few years, even before Covid—hit the stage like a multi-colored atom bomb, starting off slow with new tune “Spitting Off the Edge of the World” (which featured Karen in a prismatic hat that was bigger than her) before moving into dance anthems “Heads Will Roll” and “Zero” from 2009’s It’s Blitz.  Dedicating the ubiquitous MTV staple “Maps” to her husband, bandmates, and the crowd, Karen is an infectiously happy presence onstage, a one-woman celebration of flashy fashion and a spiritual successor to everything that made glam rock such a flashpoint moment in the 1970s.  Even in quieter moments like “Wolf” from the upcoming album Cool It Down, the woman oozed sex, style, and all-around badassery like few others can, and the snaky, frenetic guitar riff of “Date With the Night” was just about the highest point one could have hoped to go out on for the three day festival.

In closing…yeah, let’s talk about the elephant in room.  For the first time in many years, 2023 dates for Riot Fest did not appear on the Jumbotrons, which, combined with the overblown drama over the Fest’s annual presence in Douglass Park, led many attendees to speculate that 2022 was the final act for Chicago’s best music festival.  Make no mistake, readers—Riot Fest IS Chicago’s best music festival.  There are plenty of smaller, homegrown fests offering local talent and cultural exploration, and of course, there’s Lollapalooza, which, despite its often stellar lineup, is the very definition of a corporate music festival and all things that Riot Fest has historically fought against becoming.  One would imagine that this fight has been a tough one; as ticket prices inevitably rise all over the concert world and as the costs associated with touring bands, food vendors, security, and amenities continue to grow, the risk of losing something as special as Riot Fest remains a real threat.

Consider this: what other Midwestern festival covers such ground in terms of legacy acts, reunions, punk, metal, indie rock, hip hop, and everything in between?  Simply put, there aren’t any.  Riot Fest has grown into what it is because it fills a musical need, despite naysayers who seem to recognize no distinction between a monolith like Lolla and a still largely DIY festival like Riot Fest.  We need it, and we need it in Chicago proper—not in the suburbs as some have suggested, and not in some pre-fab, soulless space dedicated to concerts and away from neighborhoods.  Riot Fest is a neighborhood festival at heart.  Let’s hope it stays that way going forward, and let’s hope there IS a ‘going forward.’  As Karen O sang in the final hours of 2022, ‘what’s the time, and what’s the place?’

We’ll be waiting for the answer to that with baited breath.