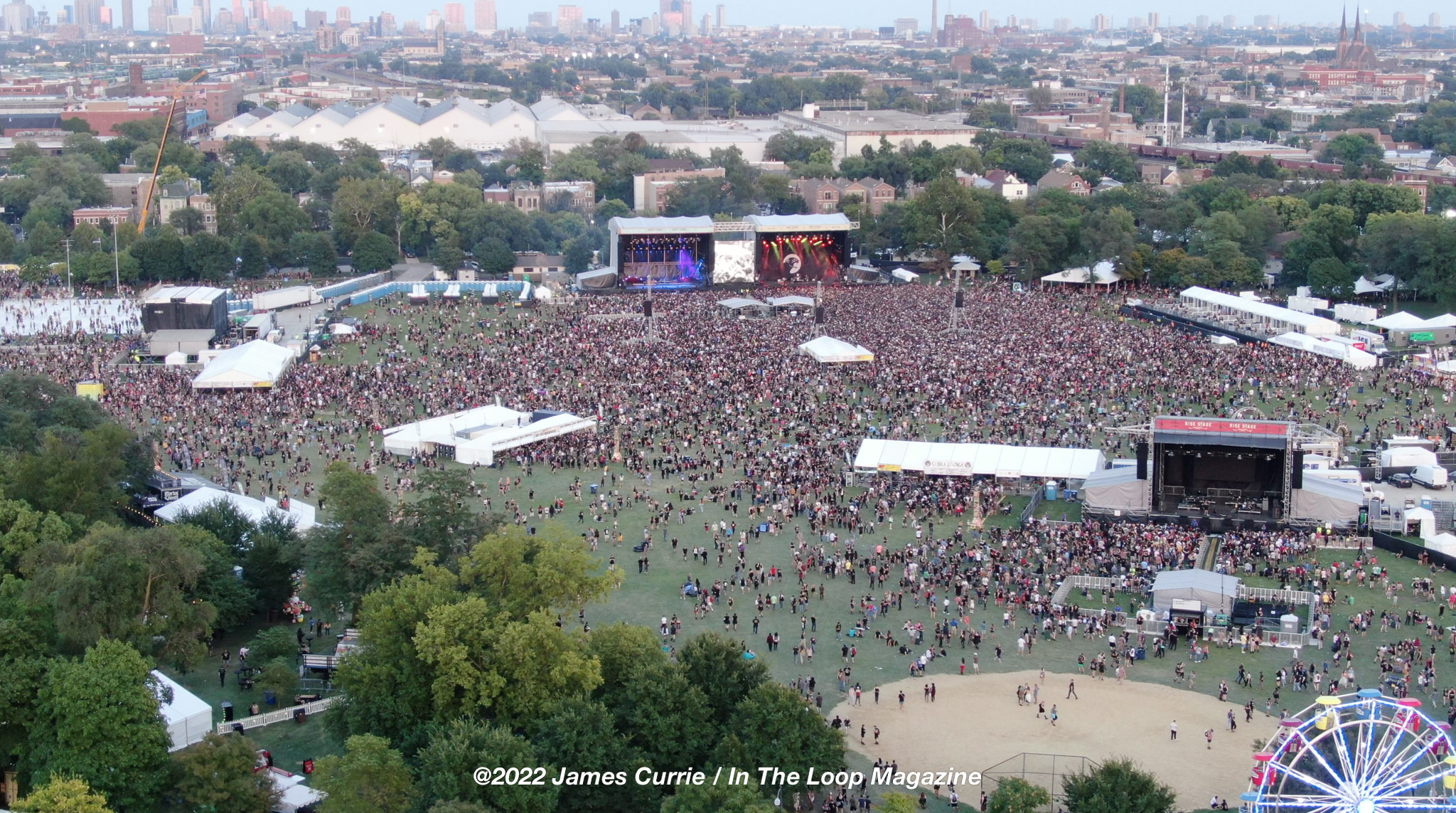 Day 2 of Riot Fest 2022 brought cooler temps, an even more stacked lineup than Day 1, and a lot less chaos in terms of lines and crowds, making for a perfect festival day from top to bottom.

Mothica brought a smooth set of her synth-y bedroom pop to the Rise Stage to start things off, and while her sound on record is a bit more electronic, the songs were given new life in a live setting, giving “funhouse” from 2021’s forever fifteen a little more crunch to go along with the eponymous singer’s cool, silver-toned aesthetic.

Welsh trio The Joy Formidable delivered perhaps the most effortlessly compelling set of the afternoon, a short and sweet blast of shoegazer bliss led by the monstrous “The Greatest Light is the Greatest Shade” from 2011’s The Big Roar.  Frontwoman/guitarist Ritzy Bryan has an ethereal voice with just enough grit to stand out over the band’s soaring arrangements; it was hard to believe that such a gigantic sound came from just three people.

How has it been 25 years since The Get-Up Kids released Four Minute Mile?  One of the brightest and best bands to emerge from the emo era—and one of the defining groups of that entire sub genre—seeing the band’s debut album in its entirety was surely this year’s ‘moment of clarity’ for many; time passes quickly in the music world, and celebrating an anniversary like this one can usher in some serious perspective.  The band sounded fantastic, and vocalist/guitarists Matt Pryor and Jim Suptic sound as youthful now as they did then, and judging from the audience’s reaction, tunes like “Better Half” and “Don’t Hate Me” resonate with their audience just as much now as they did two and a half decades ago.

Baltimore punkers War On Women were the sleeper hit of the day, and vocalist Shawna Potter was perhaps the most electrifying on-stage presence of the weekend thus far.  The band’s activist sensibilities were on full display for tunes like “Wonderful Hell” and “Divisive Shit,” an awesome display of ‘if it ain’t broke, don’t fix it’ – the classic riot-grrl model fit this quartet to a T.

Riot leaned heavily into emo and punk this year, so having Sunny Day Real Estate hit the stage at dusk and open with “Seven” was stellar on so many levels, and vocalist Jeremy Enigk’s voice doesn’t sound a day older than he did during their Diary heyday.  Sunny Day always had a somewhat darker sound than many of their contemporaries, as exemplified during “In Circles” and set closer “The Rising Tide.”

“My mother is here, so pardon my language,” grinned vocalist/guitarist Ryan Key of Yellowcard as he surveyed one of largest crowds of the weekend.  “But what in the actual fuck?” Key then said a few words about Yellowcard’s return to the stage after their 2016 breakup before introducing Ocean Avenue’s title track as the ‘reason we’re all here in the first place.”  The full-album play-through of Ocean must have felt like the ultimate catharsis for the diehards, given the band’s breakup six years ago followed by the temporary death of live music during Covid, and tunes like opener “Way Away” and “With You Around” were a perfect compliment to a beautiful night from a band whose fanbase has assured their legacy as another stellar Saturday in Douglass Park came to a close.