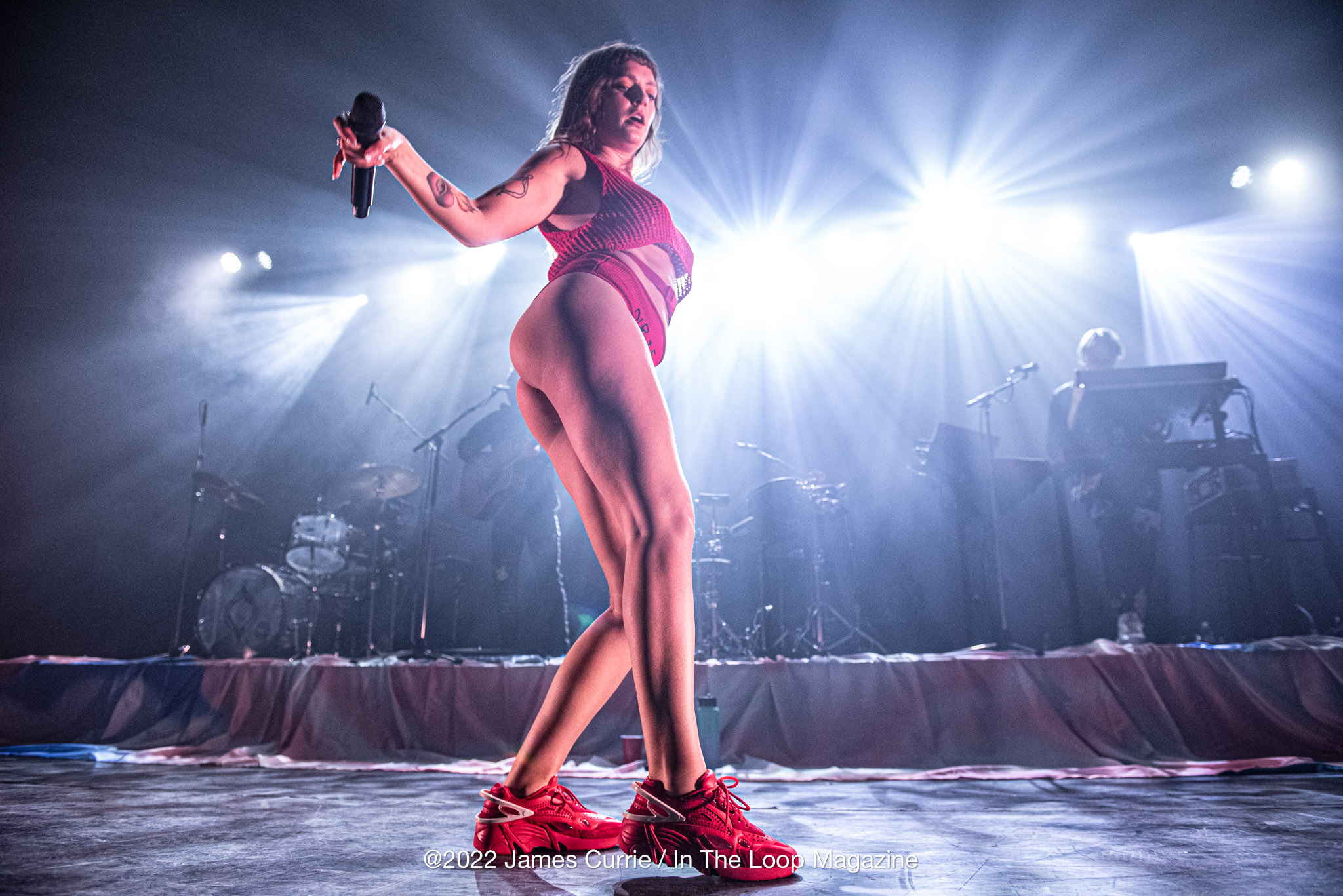 Last nights performance at The Vic Theatre was one for the books. Swedish musician Ebba Tove Elsa Nilsson AKA Tove Lo, returns to Chicago for a sold out show during the first night of Lollapalooza Aftershows of the 2022 season. Fans lined up around the corner early to get priority access for coveted front row spots. Even though this show didn’t start until 9pm, they were there since noon as one of the first in line, Jennifer Rayes, said, “We love Tove Lo. We’ve been waiting for this show forever since it was announced. My partner and I wanted to make sure we got right up front so we could show off our shirts (custom made Tove Lo fan art) and she could see them.” She added, “So coming out and hanging out on the sidewalk early wasn’t an issue for us.”

Opening act for the night was Buzz. A duo consisting of a young man on keyboards and DJing fronted by a young lady singing and occasionally playing keyboards, which she really stood out at the end when she finished the show with a key-tar in hand. The two were set center stage across from each other with LED lit keyboard framed stands. The light show for this opener was particularly good as most openers usually get the basic fill lights and spots. The two played through about 30 minutes of songs. The fans, seemingly there for Tove Lo, welcomed this young artist with open arms. The music was electro-pop fill fun.

Tove Lo took the stage around 10PM, making this truly a Lollapalooza aftershow. She came out opened armed with red solo cup in hand that matched her outfit for the night. Dawning a red leather jacket and possible red swimsuit with little more, she greeted her fans with an opening statement, “This time around is much better than the last, I can dance!” referring to the last time she played in Chicago and was seated on a throne for the entire performance due to a broken foot.

And she was full of life this night.

Tove Lo danced like no one was watching. She graced the stage back and forth. Spinning and shaking her assets for all to admire. In the years I’ve seen her perform, each time she seems to have more confidence and swagger. Her interaction with fans is palpable. Her voice is so on point, you can hear her passion and excitement with the fluctuations and cadence changes as things are happening to her live, in the moment. Case in point, during “Talking Body”, after her now infamous flash point, she hears the crowds response and reacts with vocal change that extrudes joy and thanks with volume and tempo changes to match.

Sadly, that even flow was halted around the mid point of the show as the sound system failed. A large static fuzz took over during “2 Die 4”. It was so bad, we couldn’t hear her or any instruments, just a mottle noise. The stage lights dimmed. The sound was turned off. The stage crew tried fixing it quick, but was unsuccessful. The band walked off the stage. Several minutes went by but still nothing, leaving us all to wonder, was this going to be cancelled? The fans kept cool. Tove Lo walked back out on stage with a megaphone in hand and shouted, “We’re trying to fix this. I don’t want to come back out and sing through this”. After about 20 minutes, a tech came out on stage and tested the instruments. Slowly, we started hearing them come back to life which was met with loud cheers after each successful . Finally, the lights went dark, we knew the show was going to continue and that it did. They came back out, redid the song, thanked the house for “making a miracle” and fixing things and continued the performance.

Tove Lo and her band proved to be absolute professionals at this show. What seemed like a disaster on opening night of the festival aftershow activities proved positive. The fans loved it and after the short break, came back even more charged singing along with every song and dancing in what little space they could find.

Tove Lo goes on at 5pm today at Lollapalooza. She’ll be at the Bud Light Seltzer stage for an hour long set. Lets hope this one goes off without a hitch, but if anything does happen, Tove Lo can work it.