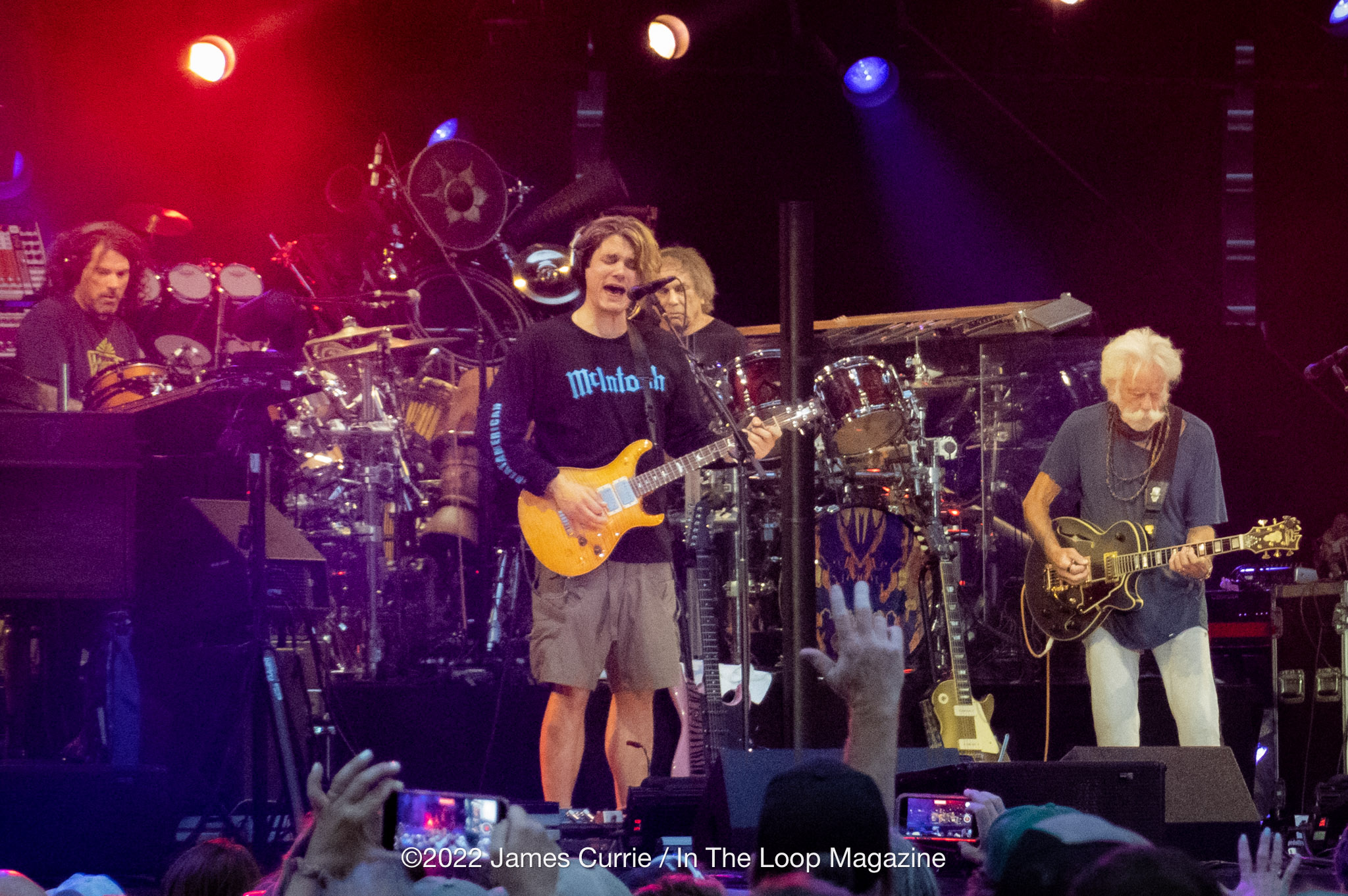 Attending a Dead show is more than just going to a concert. It’s an experience. And for some, a pilgrimage. There’s more to listening to a rendition of “Casey Jones” while doing the digger dance. There’s more than loosing your mind to the mid set drum solo. There’s more than cooing over John Mayers finely coiffed hair. You go to a Dead show for the camaraderie, the letting go of your corporate self, breath the air, taste the sweet leaf and be one with the many thousands around you. To attend a Dead and Company show is the new black of the Bob Weir fronted troop and for those fans, one they look forward to all year. This weekend, Chicago Deadheads unite for two nights in Wrigleyville at the Cubs home base, Wrigley Field.

It’s amazing to see how well the Cubs organization makes its stadium shows work in the friendly confines. How they can get 40+ thousand fans in and out relatively smooth and painless. It’s happening again with the return of the Dead and Company show. The stadium packed with sections of fans in various paid positions from general admission up front, to skybox seating in the back. I liken this to the mullet of concert going experiences. The tickets ranging from $30 up to who knows how much for the elite seat holders. According to Stub-hub, some can reach in the thousands. And that’s one thing that makes a Dead show so unique. The range of income to debt of the fans. A band that started jamming out in the row houses of San Francisco with little to nothing, as well as their followers, have grown throughout the years to the Yuppies of Silicone Valley and beyond still supporting the idea of peace and love through music.

Tonight, Dead and Company was made up of a few original members of The Grateful Dead, Sob Rock solo artist John Mayer and various session players. Weir, looking more like his former bandmate Jerry Garcia with full grey beard, longer hair, beaded neckless and loose Bohemian clothing, seems to have outgrown that dislike of “hippy life” he put down for so many years. A man who hated tie-dye and all that it represents, seems to have come closer to that lifestyle more than ever, albeit still not dawning the random splash of psychedelic color in his wear.

Helping out with lead vocals and guitar was the return of John Mayer. An artist who has been filling in on the “Garcia” roll since the rebirth of the band in 2015 and has been welcomed by fans new and old. Mayer is a fantastic guitar player and songwriter in his own right, but for me, still doesn’t quite fit in. I know this isn’t the Dead, but it’s hard to not make the comparisons as the logos, artwork, shirts, posters and other souvenirs still dictate this is a “Dead” environment. Mayer has his own vocal and guitar sound that is uniquely his. It’s a twinge and trill that at times, doesn’t fit with the Dead backlog. It also doesn’t help that he’s wearing giant studio headphones the entire time. Give the appearance of a session player filling in rather than knowing these classics and playing by heart. Again, it’s not that he’s a bad player by any means, but within some songs like “Casey Jone’s”, “Sugaree” and Garcia’s own, “The Wheel” in my option, bad accompaniment.

Returning on the drums is Mickey Hart. The “heart” of the band for sure. He has a side kick drummer but it wasn’t Bill Kreutzmann. The new drummer was Jay Lane filling in. Another incredible player, just not Kreutzmann. The two laid down the back beat throughout the night and during the drum solo / drum circle jam left no question they are large and in charge of this concert. The unique drums, samplers, effects and beats put the Deadheads into a trance that lasted what seemed a fortnight. The shirtless male dancers, long flowing summer dress wearing women with flower headbands and various glow sticks owned the field. That accompanied with the light show made anyone feel like they were tripping even if not on something.

The other members included longtime Dead & Company members, Oteli Burbridge on bass (still missing Lesh on the low end) and Jeff Chimenti on keyboards. Both solid on their respective ends.

In typical Dead fashion, you get your monies worth. They played for nearly 4 hours starting at 6:30PM and running through about 11PM. This nights set differed last night as they typically do encouraging the true Dead head followers to attend both. And don’t forget the followers of the Dead. Some fan still travel around following the band from town to town. Again, making this more than just a single concert experience.

The show ended around 11PM with the 1980’s chart topper, “Touch of Grey” marking the end of the Dead in Chicago for this year, but as in the past, since 2015 anyway, they seem to make their way back each summer to fulfill the fans positive chi again, generating new Deadheads along the way and maintaining the legacy they started nearly sixty years ago.