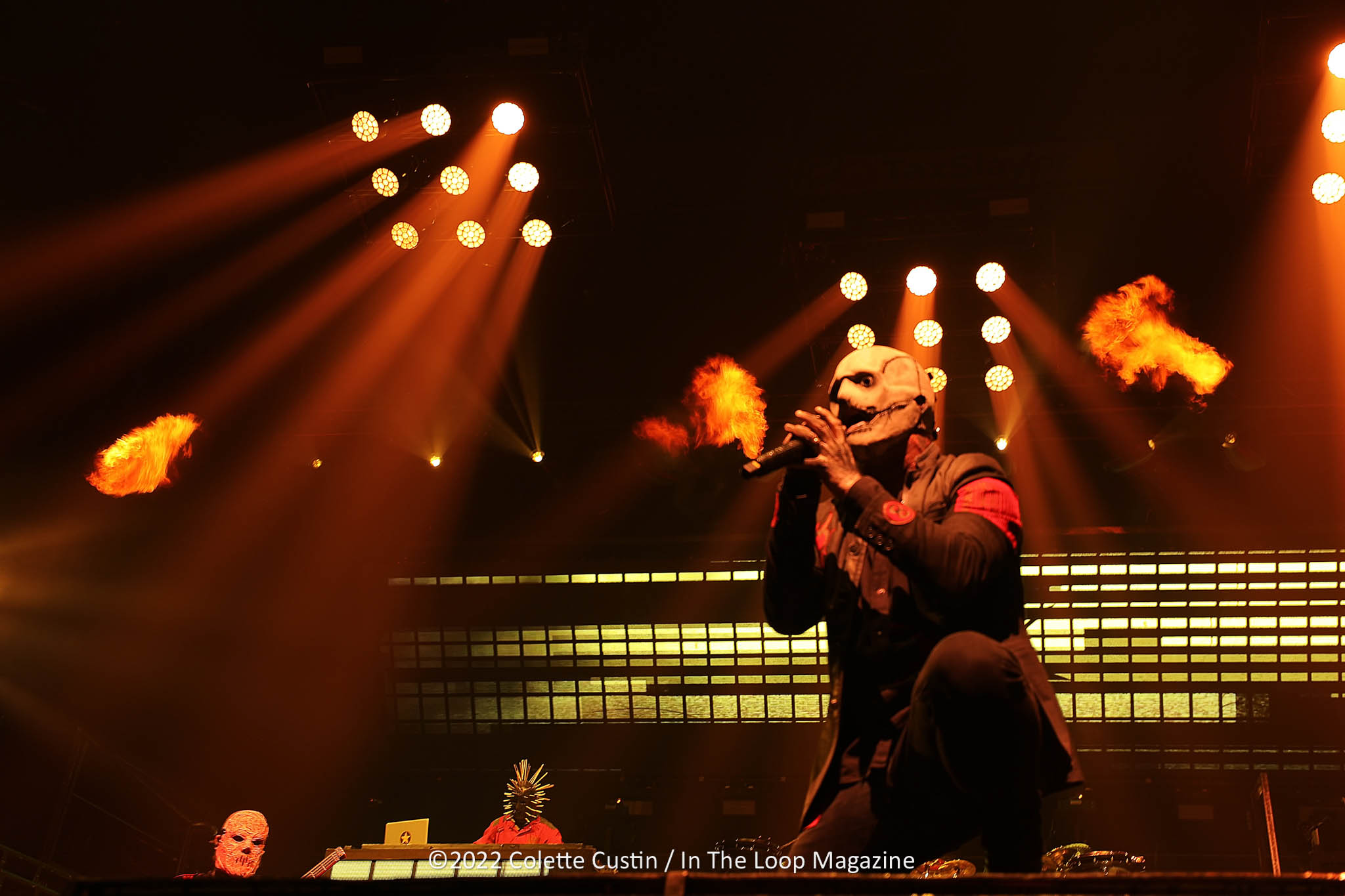 “I’m gonna go ahead and stir up some shit,” Corey Taylor said about halfway through Slipknot’s set at the Taxslayer Center on Sunday night.  “And tell you that you’ll be hearing some new Slipknot music within the next month or so.”  The already rabid crowd responded with deafening approval as the band launched into “The Chapeltown Rag,” last summer’s single teaser of what’s to come for The Nine.

Slipknot, on a seemingly endless tour cycle, are at the top of their game, and the argument could certainly be made that they’re the best metal band out there at the moment.  From crushing opener “Disasterpiece” (one of Iowa’s standout tracks) all the way to a pulverizing finish of “People=Shit” (a timely anthem if ever there was one) and “Surfacing,” the band dug deep for a setlist with some surprising twists and turns, most notably dwelling on 2009’s All Hope is Gone.  The rarely performed “Dead Memories,” arguably the ‘knot’s most accessible single, came across beautifully, and the soaring chorus of “Sulfur” and melancholia of “Snuff” were enough to suggest perhaps the band needs to revisit All Hope more often.

But back to “Chapeltown.”  Perhaps the best distillation of everything that makes Slipknot who they are, the band’s most recent outing almost over-promises what we can expect from the next Slipknot album.  Taylor’s throat-shredding, repetitive wails of “I’m afraid” as the song careens toward a dirge-y end from a hooky bounce of a chorus and punishing verses that appear to dabble in a Jack-the-Ripper era indictment of online culture (“everything is God online / and it’s as evil as it gets”; “scandalous know-it-all feedback chamber, nobody wants the truth”).  The sum of the parts is all things Slipknot, and the tune wouldn’t have been entirely out of place on 2001’s Iowa, the band’s watershed moment and the standard to which its (often unfairly) held even more than twenty years later.

“Now, we’re nearing the end of the tour, and my throat is kinda fucked up. To which you might say, ‘Corey, you sound like that anyway,’” Taylor joked near the start of the night, but you never would have known it as his signature snarl tackled the nastiest parts of the anthemic “All Out Life” and came through just fine through the more melodic moments in the set like “Unsainted” and “Vermilion.”  Not to undersell the rest of the gang; as a unit, the band isn’t often given enough credit for making an eight-piece aural assault work as well as they do, and guitarists Jim Root and Mick Thomson remain one of the best two-guitar attacks out there.

Slipknot have become the reigning kings of mainstream metal, and few bands before them have held the line as firmly in terms of sound, image, performance, and an insistence on doing things their way, and if their recent work and Sunday’s performance are any barometer, their best years may well be in front of them.

For photos from the Slipknot Roadshow in Moline, click here