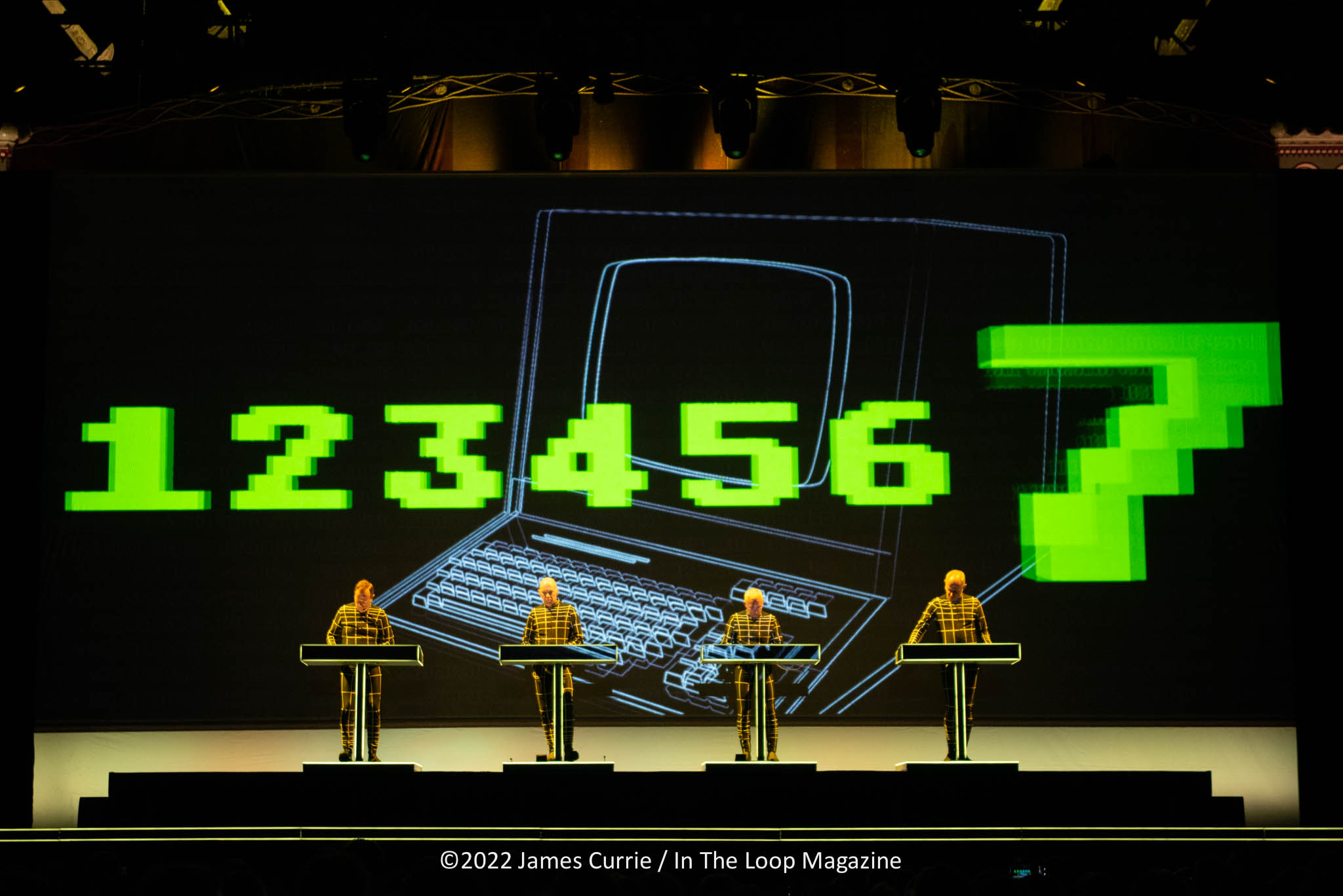 When you her the word’s Autobahn, Trans-Europe Express or Tour de France, many might think about high speed transportation events in Europe, but if you’re someone who has been following music for the last 40 years, these words bring song to mind. Not just any songs, but the iconic electronic master-pieces from German pioneers, Kraftwerk. Tonight in Chicago, we not only heard those words, but felt the beats and saw the visuals to match as only Kraftwerk can bring forth.

Ralf Hütter has been leading the Kraftwerk machine since its start in 1969. Members have come and gone (RIP Florian Schneider) throughout the bands 50+ years, but their vision hasn’t deviated much besides the actual visual presentation as presented to us tonight. Those synthesizer sounds, electronic percussions, keyboards, vocoder vocals and 4 men controlling it all still work today commanding your attention sonically and visually in ways that make you say ahhhh. How so much sound can come from 4 men and keyboards is beyond me. It’s so rich and full. You can feel the music were you stand.

Krautrock was born from this music. The German based art pop and at times avant-garde musicians make music for the mind and body. The man machines fronting this today include Fritz Hilpert, Henning Schmitz and Falk Grieffenhagen along with Ralf Hütter. Each member at a control center seemingly live programming this sonic wave computer world with songs that range through the bands entire catalog.

The visuals really taking the bands live experience to another level. As great a photographer as I have with me tonight, even James admits he couldn’t capture the full visual effects. It’s just impossible as the visual as being projected in ultra HD projection not just on the screen behind the band on stage, but how they incorporated the venues unique structure into the show. Bouncing colors and shapes off Aragon Ballrooms night sky and villa stucco trellis, it made the images seemingly dance through everything including the 4 band members on stage. Sound waves rolled across and through them like they were in an oscilloscope. UFO’s landed out front of the venue as projected on screen. Retro CGI automobiles drove down highways. Numbers and letters mimicking the Matrix rained down from above like a digital storm. If you weren’t on any number of psychedelics tonight, you felt as if you were. The simple cardboard 3D glasses we were given somehow worked for it all.

If you’ve never seen Kraftwerk live, this is the tour to catch. Between the song selections and incredible visuals you won’t be disappointed.