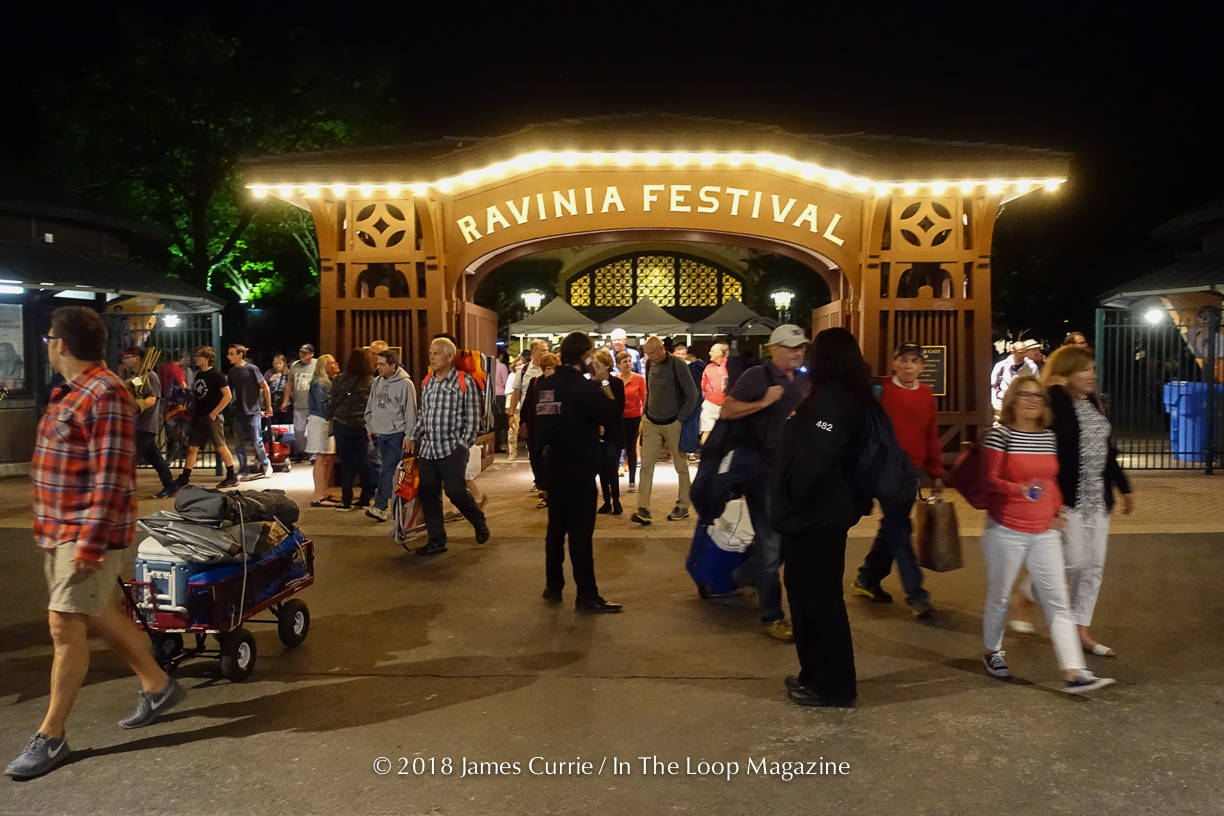 Esperanza Spalding, and Many More

Tickets on Sale Wednesday, May 4

“Ravinia is the premier music destination each summer for listeners of all generations,” said Jeffrey P. Haydon, Ravinia’s President and CEO. “We have a robust lineup of more than 100 events ranging from global music, jazz, country, and hip-hop, to indie rock, pop, family shows, and of course, classical, featuring the Chicago Symphony Orchestra in residence. We also have chamber music and recitals, films with live scores, our annual celebration of Mexican music and culture, reggae, and American Songbook—truly something for everyone!”

The Ravinia Steans Music Institute (RSMI)–Ravinia’s intensive summer training program for young artists–has named violinist and composer Jessie Montgomery as its composer in residence as part of the 2022 Piano & Strings program. From June 27 to July 1, Montgomery will hold individual and chamber music coaching sessions with RSMI fellows focused on several of her compositions. On July 2, her works Source Codeand Break Away for string quartet will be performed by the young professional musicians, as will Peace for Violin and Piano, originally composed for RSMI alum Elena Urioste.

Ravinia will present performances in all of its venues in 2022, including the main-stage Pavilion, the indoor Martin Theatre and Bennett Gordon Hall, and, after a successful inaugural year in 2021, the outdoor Carousel stage, which will have expanded offerings of casual concerts and opening acts—to be announced later this spring—on the North Lawn.

All seats in the Pavilion are reserved, and at these performances, Premium Lawn Blocks will be available to reserve on the South Lawn in configurations of two, four, or six people, and feature a dedicated screen showing the stage. The North Lawn will have general admission access with first-come, first-served seating and slightly reduced capacity to maintain guests’ comfort.

After a successful pilot partnership in 2021, Ravinia Festival extends its collaboration with Metra through the 2022 summer season. Under this partnership, all trains on the Union Pacific North Line will honor Ravinia tickets as train fares; patrons can show their dated concert e-ticket for a free train ride to and from the park on the day of the event.

This summer, remote parking will continue to be consolidated in downtown Highland Park; park-and-ride buses will cycle as needed to and from the park on designated concert days.

This summer, Ravinia Festival presents the first annual Breaking Barriers festival, curated by Chief Conductor Marin Alsop. The festival, featuring the CSO, celebrates the diverse artists and leaders at the forefront of classical music today and in the future, this year focusing on women conductors (July 29–31). The festival will feature three main-stage concerts with wrap-around programming and events each day such as roundtable discussions, master classes, symposia, and a film screening of The Conductor, a documentary chronicling Alsop achieving her childhood dream told through professional and personal encounters. Ravinia is partnering with the Taki Alsop Fellowship, which celebrates its 20th anniversary in 2022, to celebrate the previous and current fellows, offer networking and education opportunities, and showcase their talent on Ravinia’s stages.

Prior to Breaking Barriers, which marks Alsop’s final week with the Chicago Symphony Orchestra in 2022, the Orchestra performs two weeks of programs with Alsop on the podium:

After Breaking Barriers, guest conductors lead the CSO in varied programs, including the return of semi-staged operas in concert in the Martin Theatre with the CSO, Apollo Chorus of Chicago, and stellar casts, led by former Ravinia music director James Conlon:

Performances take place in the Martin Theatre unless otherwise noted.

Ravinia continues to offer a variety of programs for all ages, with some events specifically geared to children and families. Performances take place in the Pavilion unless otherwise noted.

Ravinia continues to lead the way with its signature mix of programming across a wide array of genres.

The Ravinia Music Box–which recently won Gold at the Muse Awards for Creativity–will be open on all Pavilion concert dates, from gate opening until intermission; admission is free to patrons in the park. Guests should allow 30 minutes to experience the complete program and exhibition gallery when entering. The immersive, 4D theater experience is designed to introduce one of music’s most iconic figures to audiences of all ages.

This summer a new gallery exhibit highlights the legacy of The Beatles with Ladies and Gentlemen … The Beatles!, an installation curated by the GRAMMY® Museum and Fab Four Exhibits. The Ravinia Music Box features a timed program, and the gallery is only available to guests who have been through the immersive theater experience. The celebration of The Beatles extends beyond the Ravinia Music Box with the July 3 Classical Mystery Tour tribute concert with the Chicago Philharmonic and the June 30 Reimagine The Beatles cabaret with Beckie Menzie and Tom Michael in the Martin Theatre, for which the experience center will be specially opened.

Founded in 1988, the Ravinia Steans Music Institute is an international destination for young professional pianists and string players, classical singers, and jazz musicians devoted to uniquely honing and advancing their talents as collaborative artists. Since opening its doors, RSMI has offered private coaching, master classes, and performance opportunities to over 1,500 exceptional musicians, many of whom have cultivated highly visible and successful careers in performance, leadership, and music education.

RSMI musicians perform roughly two dozen programs during the summer season, on their home stage—the purpose-built Bennett Gordon Hall (BGH). All afternoon concerts will be free and open to the public, as well as live-streamed to Ravinia’s YouTube channel, while evening and special matinee performances will be a mix of free and ticketed events.

Jazz Grandstand: Musicians from RSMI’s Program for Jazz showcase their talents in an evening of original charts on June 10, all composed and workshopped during their one-week residency at Ravinia, led by expert faculty members: Billy Childs, Rufus Reid, and Steve Wilson.

Piano & Strings Concerts: During their intensive five-week RSMI residency, the 38 Piano & Strings fellows will be featured across two master classes and 12 programs of classical sonata and chamber repertoire, including works by RSMI’s 2022 composer in residence Jessie Montgomery. Master classes and concerts will be presented in Bennett Gordon Hall on June 24, 30, July 1, 2, 8, 9, 11, 14, 15, 16, 18, 19, 21, and 22; all events will be livestreamed except the July 11 and 18 concerts.

Vocal Concerts: The four-week residency of fellows in the Program for Singers offers one master class and six performances highlighting the breadth of classical song repertoire. August 20 closes the program with a specially curated concert from Lee Musiker—Grammy and Emmy Award-winning pianist, conductor, composer, and longtime music director for Tony Bennett. Musiker will lead RSMI’s vocal fellows through a matinee program of Sondheim, playing piano alongside a jazz combo of bass, drums, and winds. The master class and other concerts will be presented in Bennett Gordon Hall on August 3, 6, 7, 8, 11, and 15 (one master class date TBA); all events will be livestreamed except the August 15 and 20 concerts.

Patrons can bring their picnics or choose from a selection of in-park dining options this summer. The Ravinia Market will be open with an expanded walk-up market and for mobile ordering. Mobile carts throughout the park provide a variety of seasonal options, including beverage carts with a selection of premium ready-to-drink cocktails, spiked seltzers, wine, and craft beers, as well as snack carts featuring many guest-favorite items, including Ravinia’s signature ice cream. Indoor and outdoor dining options will be available at the Park View, Tree Top, and Lawn Bar restaurants in the Dining Pavilion, as well as at the Freehling Room for eligible Ravinia donors. Each restaurant has a covered outdoor patio for open-air service, and reservations are strongly recommended. For guests interested in catering, Ravinia will offer reserved group spaces in select areas of the park, with packages that include tickets and customized menus.

North America’s oldest outdoor music festival, Ravinia opened on August 15, 1904, as a high-end amusement park—complete with music pavilion, baseball stadium, and dance hall—as a reason to get people to ride the uncompleted train line connecting Chicago and Milwaukee. When the railway went bust a few years later, local businessmen purchased Ravinia to run it as a music festival. In 1936, the not-for-profit Ravinia Festival Association took over ownership of the festival’s 36-acre park, and the festival’s long and enviable relationship as the summer residence of the Chicago Symphony Orchestra began. Ravinia is known for presenting music of all genres, and over the years the festival has made headlines with events like Benny Goodman performing with an integrated band, Janis Joplin giving one of her final concerts, and Princess Magogo, the first Zulu opera. Ravinia believes in the power of shared, live-music moments to inspire ourselves and the world.

Today Ravinia is the only private train stop in Illinois, with Metra’s Union Pacific North line stopping at the Grand Entrance. The festival is located about 20 miles north of Chicago at Green Bay and Lake Cook Roads in Highland Park. Onsite parking is limited, and the festival operates a free park-and-ride shuttle bus service to nearby lots along the train line.

Guests can bring their own picnics, including food and liquor. A full range of dining options is available at the park, from casual carts to fine dining. Ravinia performances occur rain or shine.

Visit the website for the most up-to-date programming and protocols. Tickets go on sale May 4.

Ravinia Festival is a not-for-profit cultural institution that depends on the support of individual donors, foundations, and corporations. Ravinia is grateful to welcome back Allstate for a sixth year as its Lead Reach Teach Play Sponsor, and extends a special thanks to Dinah Jacobs Castle as Leading Sponsor of the Breaking Barriers Festival

Artists, dates, and programs are subject to change.