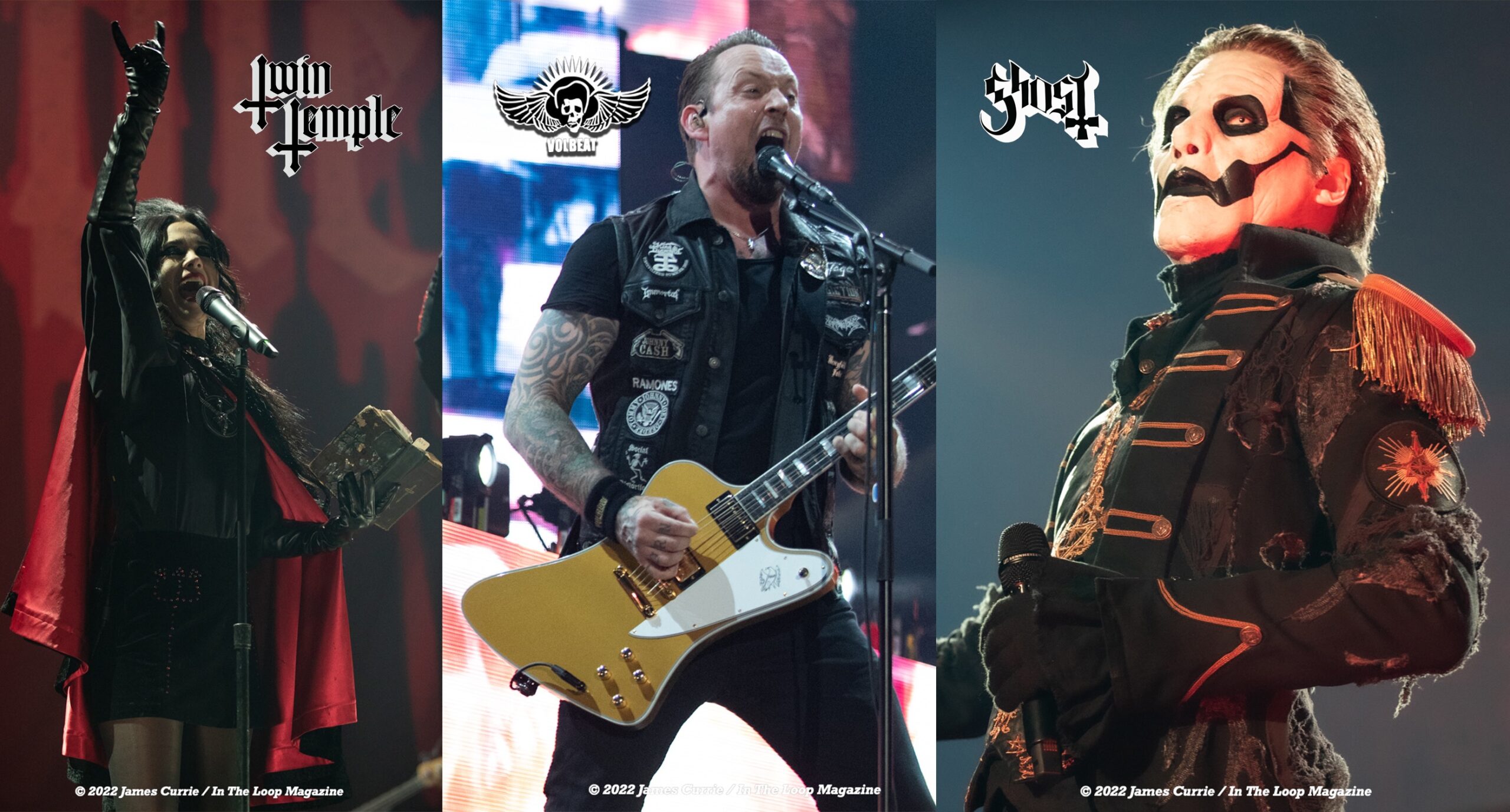 Arena rock made a raucous return to form on Friday night at the Allstate Arena as one of the metal bills of the year rolled into town. Ghost, alongside co-headliners Volbeat and openers Twin Temple, unleashed their much anticipated new stage show to Chicagoland, showcasing a band that has grown in unexpected and thrilling ways even in the space of a few years.

First up was Twin Temple, and while their current lineup features a full band, the unit remains the devilish love-child of guitarist Zachary James and vocalist Alexandra James, who, with her jet-black beehive and slinky velvet cape, called to mind iconic female vocalists like Ronnie Spector.   Known for their on-stage Satanic rituals and dedication to subverting traditional approaches to Satanism in rock and metal, Twin Temple owe more to the genre-bending pop of the 1960s, moving from classic rock n’ roll progressions to tangos on songs like “Let’s Have a Satanic Orgy” and “Satan’s A Woman.” While Twin Temple only had time for a few tunes, let’s hope they maintain that small club energy they’re known for as they inevitably move into bigger and bigger venues.

Teasing the audience throughout the night with snippets of Johnny Cash’s “Ring of Fire” and Metallica’s “Shortest Straw,” Volbeat’s vocalist/guitarist Michael Poulsen led the quartet through a mish-mash of styles in their seventeen-song set, and he was clearly having a blast. Guitarist Rob Caggiano strutted the stage and offered some nice layering to tracks like “The Sacred Stones” and “Say No More” from the band’s new album Servant of the Mind. At times, it felt like Volbeat wasn’t sure who it wanted to be, and the segues from tracks like the Thin Lizzy-esque “Lola Montez” and the bright, rockabilly stylings of “Die to Live” felt a bit out of sync with the band’s heavier material, though the band’s command of the stage speaks to their growth and continued promise amongst their fanbase.

But for most of the place, the night belonged to Papa, even if he wasn’t around for too long. (That may have been a spoiler. Apologies.)

Opening with “Kaisarion” from the forthcoming Impera—a dynamic track with bright chord changes and background vocals that called to mind elements of Queen and Iron Maiden— Ghost guru Tobias Forge and his Nameless Ghouls blazed through a fifteen-song set that highlighted just how far Ghost have come since 2011’s Opus Eponymous. Gone are the days when the enigmatic, mocking Papa Emeritus emerged in a veil of mystery and incense smoke; now, Papa is merely a character in the world Forge has built, appearing, in his fourth incarnation, for a fiery, triumphant rendition of “Year Zero.” (And man, oh, man, how I have waited to hear an arena crowd bellowing “Hail Satan!” to that chorus for many years now.) Most of the set focused on a scaled back version of Cardinal Copia, the character introduced during the last album cycle (2017’s Prequelle), as Forge cycled through a number of different costume changes throughout the night, finally ending on a sequined ‘mirror ball’ jacket for the final few songs of the evening, including an impressive cover of “Enter Sandman” (which the band covered for Metallica’s recent “Black Box” project) as well as a one-two punch in lieu of a traditional encore: the danceable pop-sheen of “Danse Macabre” and a thunderous rendition of one of the band’s strongest paeans to darkness, “Square Hammer.”

“Do you like going to the movies?” Forge asked the crowd, a wink and nod to “Hunter’s Moon,” a new track featured on Impera and also having appeared in last fall’s Halloween Kills, though beyond that, the new material remained mostly in the dark, presumably until the band’s proper Imperatour later this year. An extended intro that allowed for some wordless banter between Ghouls led into an explosive “Cirice,” and the momentum carried as Forge joked about “Mummy Dust” being a ballad before the band tore the song from the ground with its moody chorus interludes and biting synths. Forge and Co. have always made a point of engaging with the audience in a humorous way as opposed to playing the characters too ‘heavily,’ though for lifers, there’s no longer denying that this is, in many ways, a different band entirely from the days of Infestissumam and Meliora, but of course, that’s to be expected. It’s clear that Forge has long had the vision to bring Ghost to where it is now; their clever announcements from album to album introducing new incarnations of Papa Emeritus—and finally, the more playful Cardinal Copia to bring to the band’s image to a broader audience—were clearly part of a masterplan. That’s not a bad thing; every band in rock and metal that achieves success at the arena-packing level goes through a necessary evolution to grow their audience; so it is with Ghost. They’ve earned it, and on Friday, they more than proved they deserve it as well.

For Photos Of Ghost at Allstate Arena, click here

For Photos Of Volbeat at Allstate Arena, click here

For Photos Of Twin Temple at Allstate Arena, click here

Mary On a Cross