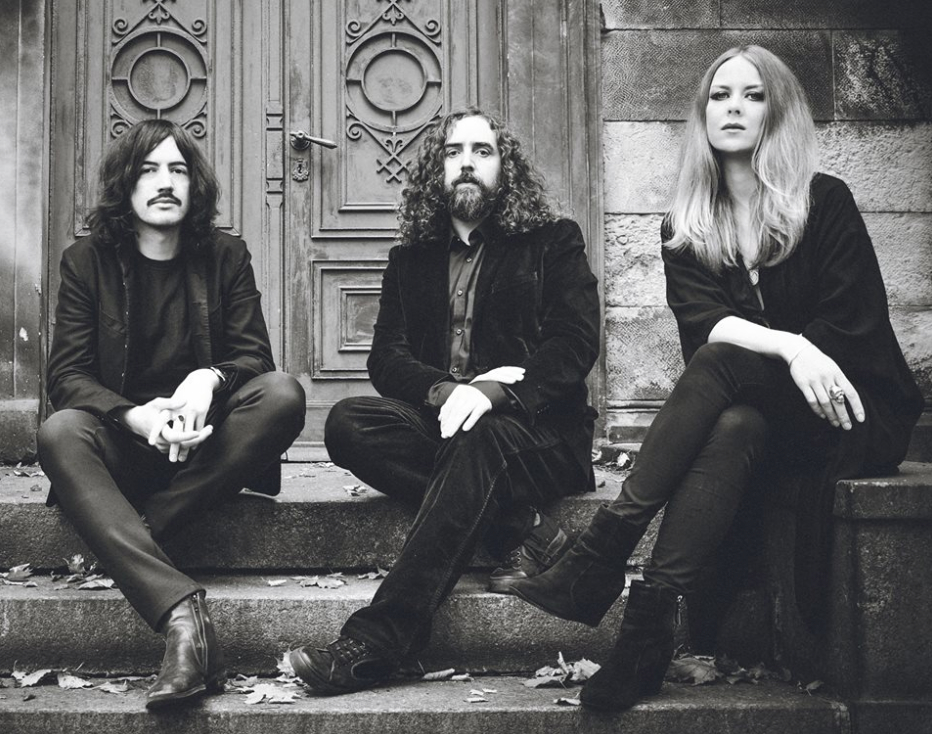 Christopher David: So tell us a little about how you went from The Oath (Sadonis’ previous band) to Lucifer.

Johanna Sadonis: The premature ending of The Oath was not really planned, so when that ended, it was a bit devastating. So, I thought, okay, I’m just going to turn this thing around as swiftly as possible, make something new, and march on. I founded Lucifer, and Dino (Gollnick, bass guitar) was with me pretty much from the start, because we’d already discussed him joining The Oath. The same goes for Andy (Prestidge, drums), who played with The Oath on the record and live. I was looking for a guitar player, and our label boss (Rise Above Records) suggested Gaz Jennings (of Cathedral), and lucky for me, he said yes.

JS: Yeah! Yeah, it started very quickly, within a year. Since the end of The Oath and the release of the first Lucifer album (in June), about a year. It was a lot of work but it was really good.

CD: So, I don’t know how it is in Europe right now, but in the states, we’re seeing a bit of a renewed interest in the whole New Wave of British Heavy Metal movement from the late ‘70s and early ‘80s.

JS: Yeah, in Europe as well, a lot of the younger metal kids are rediscovering all the NWOBHM bands. Andy also plays in Angelwitch, they just had a comeback where they played all the metal fests, obviously with other bands like that as well. Dino Gollnick: Johanna also DJs at a club in Berlin that’s really popular, and they focus on playing more of that kind of stuff.

JS: Yeah, I’m DJing, but we’ve also had a monthly, old school heavy metal night for the past six or seven years.

CD: It seems like every show I go to of that genre, from bigger bands like Judas Priest to smaller bands of that genre, is jammed again. Saxon, Diamondhead, those bands are touring again and drawing good crowds. It’s phenomenal to see, as a fan.

JS: It’s so great for the bands to be able to get out there and appreciated like that again, yeah.

CD: I was curious to ask about that because it feels like you’re coming from that place a bit. You released a limited edition 7” of covers by Angelwitch and The Rattles, which blew my mind. The Rattles cover (“Devil’s on the Loose”) was such an obscure choice, and a great one.

JS: Yeah, that was a bit of an homage, because it often gets forgotten, especially in Germany itself, that we used to have quite a cool ‘70s rock scene, you know? And of course, music fanatics and musicians know this, but the average kid isn’t really aware of how cool Germany was at one point! The Rattles had only a small phase with their girl singer, two or three years, and they had those two hits, “The Witch” and “Devil’s on the Loose.”

CD: Very cool. So regarding the Lucifer album, you recorded most of it live in the studio, is that right?

DG : We were just together in the room, yeah. We didn’t use every single thing we played in there, as such, but the rhythm section, yes. The bass and drums are pretty much live, Gaz just had to add some guitar bits and solos.

JS: We evened out some things, and we did overdubs of guitars and vocals, there are tons of guitars on the record.

CD: It does have very layered, throaty guitars, with a feel to the production that really harkens back to the late ‘60s, early ‘70s.

JS: I picked Candy Bomber Studio on purpose, because Ingo Krauss previously ran Conny Plank’s Studio, which was known for a lot of Krautrock. He has this studio in Berlin with all this cool, vintage equipment, it’s really wonderful, and they’re not really known for metal albums. And I thought it’d be good to take it out of context.

CD: In terms of the overall sound of the record, the studio ended up being perfect for what you were going for. And as far as songwriting, it’s one of those records that sounds like it’s meant to be taken as a whole, it’s very cohesive and the songs work really well together. Was that something you planned in terms of your vision for the record, or did those just happen to be the songs that you had ready to go?

JS: It was deliberate, and of a different concept than The Oath. The Oath had similar influences, with the nods to ‘70s heavy rock, but The Oath was a little more raw, guitar wise, and was leaning much more toward that New Wave of British Heavy Metal style, which I wanted to take out of Lucifer to make things a little more eclectic, I guess? And Gaz has his own language of guitar playing, so it makes that stand out, he has a real style.

CD: You’ve discussed how The Oath’s dissolution wasn’t a planned thing at all, but given that you had such a clear idea of what you wanted this band to be, and that the shift in sound was so deliberate, is this something that you might have done anyway, in retrospect?

JS: I don’t know, you know, if you put different people in a room, you get a different chemistry. Linnea (The Oath) had a much more punky, Motorhead style of playing, and she and I would write songs together that way, as opposed to Gaz, where the outcome proved much different.

DG: And you also wouldn’t want to recreate the same thing you’ve done before, regardless, you want to take things to a different place.

JS: I thought it’d be stupid to do the same thing over again. It was okay to get one thing out of my system and move on to another.

CD: Stylewise, I think your vision of Lucifer leaves things a bit more open to diversity in terms of your sound, as you go forward.

JS: Yes, it leaves it open for us, we’ve already been talking about that, actually, what we could do next.

CD : Being that this record is called ‘Lucifer I,’ my hope was that there was a ‘II’ on the horizon, even though it’s probably a bit soon.

JS: There’s a saying in Latin, nomen†est†omen†(“the name is a sign”), that if you give something a name, you’re sort of conjuring whatever follows? And I thought, I don’t want to repeat history, you know? If the ‘I’ means we have to continue…

CD: I’d like to talk about your lyrics for a minute. I’m always curious as to the lyrical approach that songwriters take, and it seems like they fall into two camps, which sometimes cross over. There’s the narrative approach, where you’re trying to tell a specific story, and a more impressionistic approach, where it’s more about creating an atmosphere that lets the listener interpret what’s happening in the song. How do you typically approach it is it one approach versus the other?

JS: I first write the melodies, and I like to treat vocals as an instrument, so I’ll just basically sing ‘blah, blah, blah,’ but then usually as I keep working, it brings up some sort of feeling or emotion, a memory or association with something. So for me, lyrics are very personal, sometimes several stories combined, and obviously shrouded in some sort of symbolism. Certain symbols or figures, images that represent something specific. They all mean something to me. I think that music really should take you away to some sort of parallel universe, you know, so I think it’s good if things aren’t quite clear. People can use their own imaginations and make their own interpretation to apply to whatever they associate it with, more than if it was “oh, my girlfriend left me, etc.”

CD: From a songwriting standpoint, are you all working on things together now? I know that you and Gaz worked on long-distance demos for this first record quite a bit. Is it now more of a ‘band’ situation?

DG: I think it’s going to go more in that direction, yeah, as a band. We’ve been talking about the next album being a more collaborative effort. That should be interesting, and it’ll change our sound yet again.

JS: And I would say that even though these songs were demoed, the way Dino and Andy learned the songs, they put their own style into the songs, so it really did become the ‘band’s song,’ in each case. But yes, songwriting wise, we’ll take more time now to sit and write as a band.

CD: Can’t wait to hear that. How’s the North American tour been so far?

DG: It’s been great! Chicago will be the tenth show. We started in California, which was beautiful, drove up the west coast, cut through Salt Lake City…we’ve seen some amazing places.

CD: Well, I’m very happy for you. The record is phenomenal, and the midwest has a huge metal and hard rock fanbase, so Chicago will be good to you tonight.

JS: Thank you so much. Hopefully, we’ll be good to Chicago!