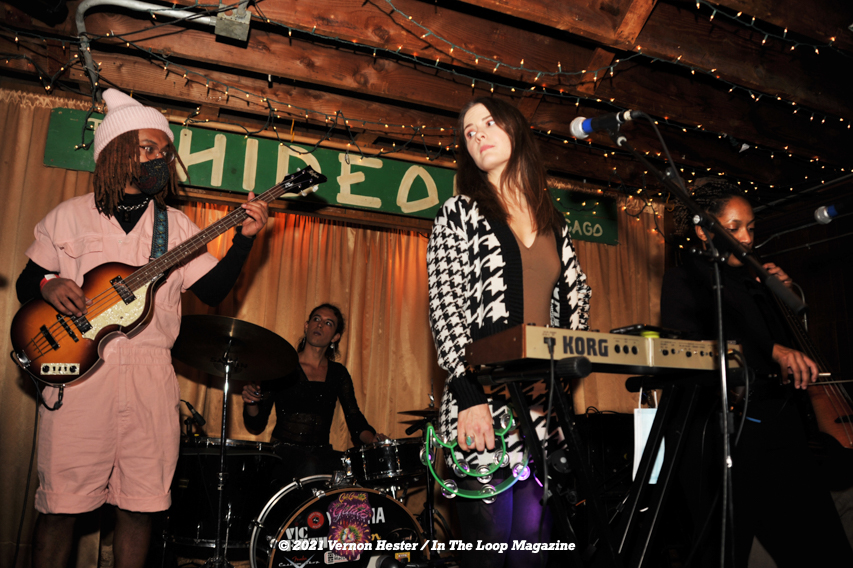 Thanksgiving came early to the Hideout Inn on November 6. When Glad Rags’ front man, Glad Matt thanked the exuberant crowd for their patience in waiting three years for the band’s first full length, All of Them [on Sinkhole Sounds] he also unwittingly celebrated some other obvious benefits.

Granted the Covid pandemic is not over and so many have lost a great deal [loved ones, businesses, friends, jobs, money, trust in government] there is much to be thankful for. One of these benefits is The Hideout Inn itself, which managed to stay in business despite the pandemic and some unpopular zoning/land deals [One of which includes that bizarre sports field which has been erected in the space that used to house city utility vehicles just kitty corner from the Inn. I have fond memories of several Hideout Block Parties that happened in that space, but I digress…]. The Inn, like The Empty Bottle has been called one of the best rock clubs in the country and both, despite having an endearingly ramshackle charm have always been about the people who go to them and not the aesthetics. Not only has business gone back to normal [not quite, proof of vaccination and a face mask are still required] but with the addition of rapper/producer/poet/DIY pioneer Mykele Deville as talent agent, the club is headed for a new era.

Then there is the survival of Glad Rags themselves, a genuinely sweet ragtag collective that have made a name for themselves in Chicago’s DIY scene and local media by being inventive, nutty, astute, and unpretentiously themselves.

Officially started in 2014, the band, corralled by Matt has seen a number of members come and go but it always found a way to spotlight each of its members while making memorable music.

The odd and inviting thing about Glad Rags is that they have a knack for mixing various flavors of music [honky-tonk, disco, psychedelic rock, art rock, straight up pop] while presenting it in a low-key fashion. Never the ones to present themselves as a circus, which they could easily do, they come across as a bunch of pals leisurely jamming in the garage on a sleepy Sunday afternoon. The biggest achievement of All of Them is that it captures the Rags’ skill at making tight little songs with jarring shifts in tempo and arrangement while never losing sight of the lyrical content or emotion. In short, this is an art pop band that never lets the artiness crowd out the pop and the result is a body of music [so far] that is catchy, melodic, and entirely accessible.

After guest opener NIIKA opened the show with a solid set of acoustic whispery slow burners, the near overflow crowd got a little too comfortable with their cocktails. Once Glad Rags got onstage it was anyone’s guess what would happen next. Starting the show with the new, “I Used to be Happy” vocalist Jacqueline Baker gave the song a mid-tempo bluesy feel followed by the similarly sounding “All of Them.” The band [which also includes Kelsee Vandervaill on cello, Patrick Sundlif on banjo, Mah Nu on skins, and Salem Lyabode on bass, with Matt on vocals and keyboards] suddenly threw off the calmness and woke everyone in the room with the show favorite  “Alamo,” which had Baker, Matt, and Vandervaill yelping with nerdy delight and a cushion of music so delectable that it brings to mind a wild ass interplanetary rodeo. “Alamo” was the first bonkers song of the night, and the crowd put all those mixed drinks and beers down and got into some serious ass shaking[the sudden clinking of ice cubes was deafening.]. “Lovely Eyes” had a ragged elegance while “U Say,” the leadoff single, had a propulsive energy that brought the show to a new level. “Disco City #10,” of all things fit right in with its old school Studio 54 vibe delivered with a bracingly fresh youthful attack [this was the second time the crowd lost their shit and started dancing like hip shaking felines strung out on catnip.]. Clearly Matt had a blast with “What’s My Body Doing?” and he looked like a giddy blonde sugar plum fairy with glitter on his eyes and what looked like a necklace made of Tribbles bouncing about his neck. The crowd lapped it up while others twirled with abandon.

Matt closed out the show with the spare “Haley’s Comet,” which lyrically sounded like a confessional but played like an adult lullaby. Glad Rags’ set may not have been the welcome back to normal life that everyone is so desperate for right now, but it was that first searing beam of hope that things will certainly get better.

For photos from the show at The Hideout, click here