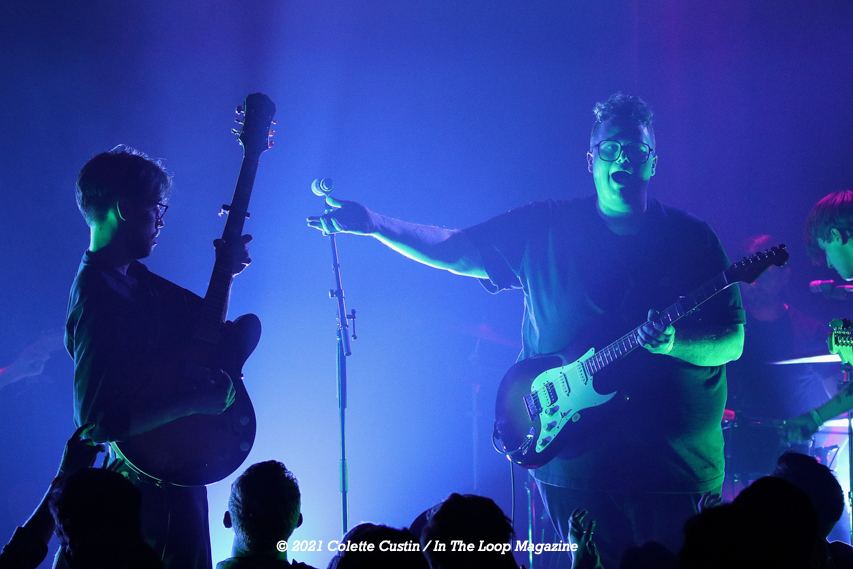 It’s been quite the year for Jason Singer, the songwriter, frontman, and guru of Detroit indie rock outfit Michigander. 2021 started with the release of a new EP, Everything Will Be Ok Eventually, and lead single “Let Down” gave Michigander perhaps their biggest shot at a radio anthem yet. Then came one of Singer’s holy grails—a slot on this year’s Lollapalooza, which must have been vindicating given the size and enthusiasm of the crowd on that memorable August day (see our Lollapalooza coverage for a recap). And finally, a headlining tour that has Singer visiting cities he’s been playing for years—in even bigger venues, most of which have sold out.

As a fan, it’s been a great thing to watch; there’s a joy and a purity, if I can go that far, to seeing an artist reach for success with nothing but a strong work ethic, a great attitude and killer songs, and Singer has checked every box on that front. Michigander’s sold out show at Lincoln Hall on Thursday proved that Singer and Michigander are uniquely positioned to continue growing in ways that are impossible to even predict.

“Can I just look at you for a minute and just be excited to be here?” Singer asked before the band drifted into the contemplative sway of “Reds,” one of numerous songs in the band’s set that clarified just how damn tight Singer’s songwriting really is, calling to mind early Keane or U2 in their less bombastic moments. The epic “Circles” was soon to follow, and the band’s well-deserved headliner status offered the opportunity for an extended jam at the end that made the most of what was already one of the best indie rock songs of the last twenty years.

Michigander’s songs are a perfect cocktail of styles and approaches, at once danceable, singable, and lyrically thoughtful. Taking the opportunity to offer observations on the frustrations and pains of Covid, Singer used the intro to “Together” to do what he does best—raise the energy in the room for a moment of positivity before engaging everyone in a singalong, and the momentum continued through “Saturday,” “East Chicago, IN,” and “Fears” before Singer paused to introduce the band, eschewing a typical set/encore break in favor of some light-hearted improv songs about Lincoln Hall and West Chicago before leaving the audience on a high note with “Let Down.” Openly emotional by the end of the show, Singer and Co. left the stage to post a side-by-side on Instagram a bit later of their first show in Chicago—a literal apartment performance in 2015—next to a shot of the post-show cleanup at Lincoln Hall.

This might be the point at which I would pause to reflect in some way, to try and offer context for the show I’ve seen beyond the show itself. But I’m not going to do that, because there is no better context to offer than what Singer has created for himself and his fans, and that was on full display in Chicago last Thursday. He deserves nothing but success, and there’s no doubt that it will be amazing to see where he takes Michigander next.

Photo Gallery: Michigander @ Lincoln Hall Chicago Musician Jamie Dull Releases More Music During The Pandemic Than Most Do In A Decade, Today, With Another Release Under The 'Electric Villain' Moniker