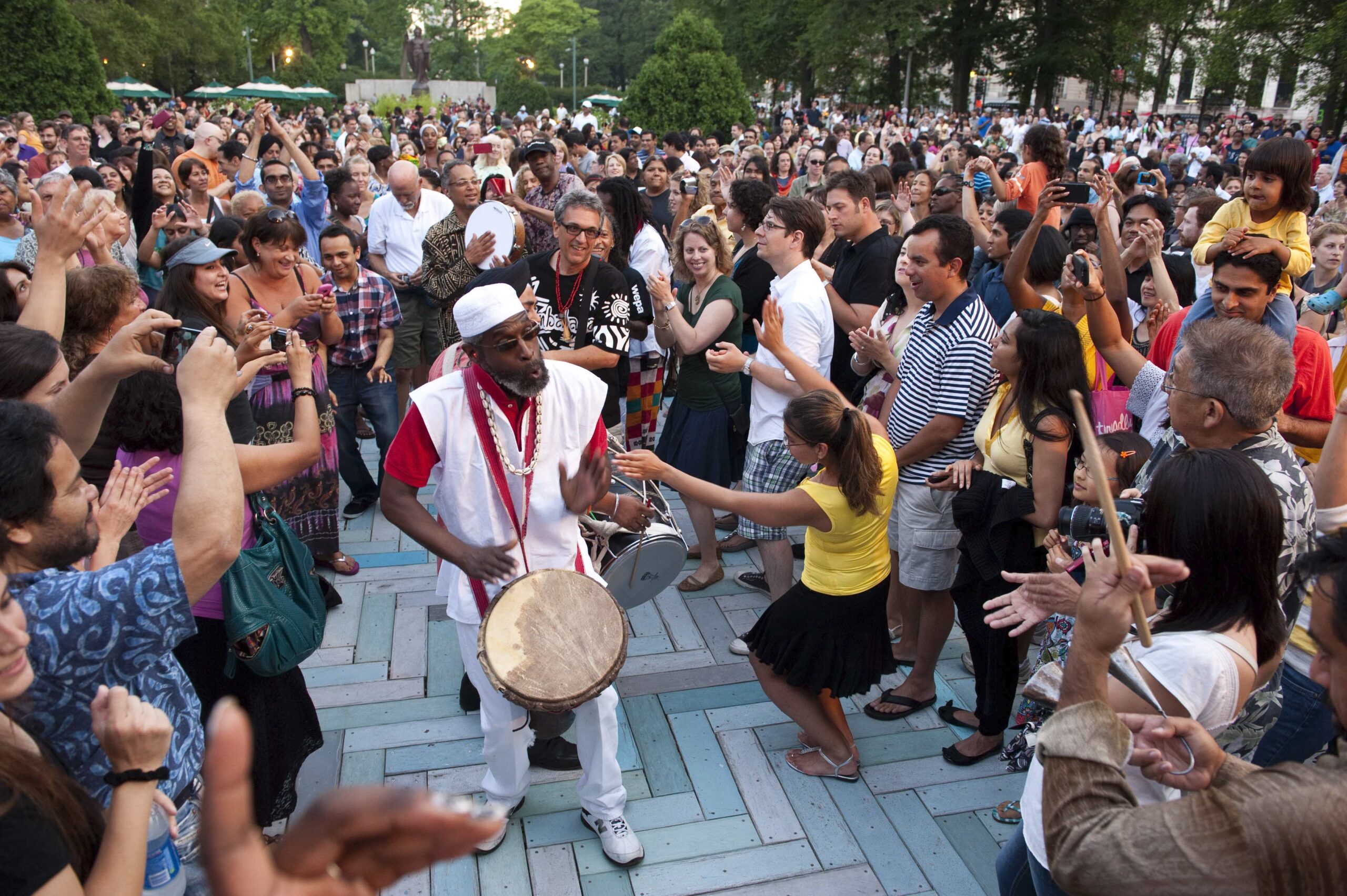 CHICAGO – Mayor Lori E. Lightfoot and the Department of Cultural Affairs and Special Events (DCASE) today announced even more returning, new and reimagined summer cultural events across Chicago — plus artist lineups and other details for City programs previously announced as part of “Open Culture” — just one component of the Mayor’s “Open Chicago” initiative to safely and fully reopen the city.

The new programs include 16 City-supported “Chicago Presents” community events; a nine-part “House City” series in the neighborhoods that helped create the music genre; a week of “Taste of Chicago To-Go” pop-up food and music events for the public — plus 25+ community meals; two Latinx and World Music celebrations; two films and two more just-announced special events at the Jay Pritzker Pavilion; and a unique mash-up of public art and dance at Lurie Garden in Millennium Park.

“Just this past Friday, Chicago became the largest, fully reopened city in America — an achievement that would not have been possible without the collaboration of leaders in the public, private and philanthropic sector,” said Mayor Lightfoot. “I want to thank each and every City, arts, community and business leader who partnered with us to Open Chicago as well as our very own residents, whose diligence in following public health guidance has allowed our city’s rich, diverse and legendary cultural scene to bounce back and become more resilient than ever before.”

The City will permit dozens of other free and affordable special events throughout the summer. DCASE will lift the remaining capacity limits for events (aside from normal venue capacity) and will not require advance registration. All summer events will adhere to the latest public health and safety guidelines, with mobile vaccinations at many City-sponsored events.

“Chicago’s arts landscape has been devastated by the pandemic, but I’m excited to see our music clubs, theaters, and festivals come back to life and energize Chicago,” said DCASE Commissioner Mark Kelly. “During this 2021 Year of Chicago Music, our ‘Chicago In Tune’ festival will emerge as a joyous month-long celebration of Chicago’s amazing music scene. Our Chicago Presents and other neighborhood programs will animate our entire city with music, theatre, and dance. The arts have suffered greatly, but culture is coming back to Chicago — big time.”

Through Chicago Presents — an initiative of Arts77, Chicago’s arts recovery plan — DCASE and the Walder Foundation have awarded grants ranging from $5,000 – $30,000 to support 16 community events, July 1 – August 14.  (Chicago Presents will support a second round of events, August 15 – October 31, to be announced later this summer.) Many of these events will feature artists from the Chicago Band Roster, a new resource listing over 200 Chicago-based musicians of all genres — created for the Year of Chicago Music (Chicago.gov/Music). Highlights include:

House City (ChicagoHouseMusicFestival.us) is a new, nine-part series of free events popping up throughout the summer in the neighborhoods that helped create the House music genre over 35 years ago. Event dates and communities are July 8 in Austin — presented as part of Taste of Chicago To-Go, July 16 in North Lawndale, July 23 in South Shore, July 31 in Englewood — presented as part of the Protect Chicago Music Series, August 14 in Humboldt Park, August 28 on the Southeast Side, August 29 in Lakeview, September 12 in South Shore — presented as part of Chicago SummerDance in the Parks, and September 19 in Bronzeville.

The Chicago SummerDance in the Parks (ChicagoSummerDance.org) series returns this summer, presented with the Chicago Park District. Dancers of all ages and skill levels are invited to take part in family and creative activities from 4:30–5:30pm and introductory dance lessons by professional instructors followed by live music and dancing from 5:30–7:30pm except where noted. Schedule, parks, and themes are: August 18 at Willye B. White Park (Reggae), August 25 at Ogden Park (Steppin’), September 1 at Palmer Park (Line Dancing), September 8 at Davis Square Park (Cumbia), September 12 (Note the time: 1–6pm) at Rainbow Beach Park (House) — presented as part of the House City series, and September 15 at Portage Park (Salsa).

Chicago In Tune (August 19 – September 19) is a new citywide festival celebrating music in the key of Chicago — during the 2021 Year of Chicago Music. This month of music will bring iconic neighborhood venues, presenting organizations, and musicians from across the city together to celebrate all music genres and forms — with both large and small, free and ticketed events at clubs, concert halls, and beyond. Highlights include The Lyrical Lemonade Summer Smash in Douglass Park (August 20–22), Ruido Fest in Union Park (August 20–22), ARC Music Festival in Union Park (September 4 & 5), Pitchfork Music Festival Chicago in Union Park (September 10–12), Riot Fest in Douglass Park (September 17–19) — and “Music Lives Here,” a new public art initiative. More highlights and details will be announced in the coming months. Venues, organizations, and artists may submit Chicago In Tune events by visiting Do312.com/ChicagoInTune.

At Millennium Park, Cloud Gate (aka “The Bean”) is now fully accessible to the public and Crown Fountain will reopen on July 1. Art exhibitions in the Boeing Galleries will continue through 2023. Jay Pritzker Pavilion will lift the remaining capacity limits for events (aside from normal venue capacity) and will not require advance registration for the seating bowl or lawn. Plan your visit at MillenniumPark.org.

To apply for media credentials for Chicago In Tune and Millennium Park Summer Music Series concerts at the Jay Pritzker Pavilion or other DCASE events, please contact dcase@cityofchicago.org.

Millennium Park summer programming — made possible in part by the Millennium Park Foundation — will include 25+ pop-up music, theatre, and dance performances throughout the Park during June and July; and two films: “The Wiz” (1978, G) and “The Dark Knight” (2008, PG-13) starting at 6pm on August 24 and 31, respectively; plus 10 genre-defying concerts at the iconic Jay Pritzker Pavilion as part of the Millennium Park Summer Music Series (Mondays, August 2 – September 13 at 6–8:30pm, and Thursdays, September 2–16 at 6–8:30pm, MillenniumPark.org). Highlights include: Two CIVL (Chicago Independent Venue League) collaborations, one of which features the debut of Andrew Sa’s “Andrew In Adventureland” music and film project on August 16; a spotlight on “Contemporary Indigenous Voices” featuring Leonard Sumner, Lyla June, and others and co-curated with Frank Waln on September 6; Angel Meléndez and the 911 Mambo Orchestra’s “Homenaje a la Salsa Boricua de Chicago” — a special DCASE commission highlighting the golden era of Salsa in Chicago on September 13; and “Zulema” — the finale performance of Sones de México Ensemble’s electrifying new work on September 2, following a three-week engagement in 10 parks citywide. “Zulema” is produced in partnership with Chicago Park District’s Night Out in The Parks, Goodman Theatre, Chicago Latino Theater Alliance (CLATA), and the National Museum of Mexican Art.

Special events at the Jay Pritzker Pavilion will now include “A Deeply Rooted Evening for Chicago’s Healing: GOSHEN (preview)” presented by Deeply Rooted Dance Theater (August 25 at 7:30pm, DeeplyRootedDanceTheater.org) and “Baroque in the Park” presented by Music of the Baroque (September 10 at 6:30–8pm, Baroque.org). Previously announced, The Auditorium Theatre presents ABT Across America featuring American Ballet Theatre (July 8 at 7:30pm, AuditoriumTheatre.org) and Chicago Dancers United will present Dance for Life (August 26 at 6pm, ChicagoDancersUnited.org).

Other unique performances throughout Millennium Park include two free, outdoor events presented by the Joan W. and Irving B. Harris Theater for Music and Dance (HarrisTheaterChicago.org): “INTERPLAY” curated with composer, trumpet player, and multi-instrumentalist Sam Trump on the Harris Theater Rooftop (August 22); and the “Films.Dance” series, a global collaboration produced by Jacob Jonas The Company and featuring over 150 artists from 25 countries, screening at the Jay Pritzker Pavilion (September). “Sonic Pavilion” (August and September, ESS.org) is a series of sound installations commissioned by Experimental Sound Studio for the overhead trellis loudspeaker array at the Jay Pritzker Pavilion. Compositions utilize the entire surface of the trellis’s 60-channel system, resulting in an immersive canopy of sound — a fluid sonic architecture that bridges the focus of a live performance and the majesty of the surrounding cityscape. Additionally, Chicago-based contemporary artist Brendan Fernandes presents “72 Seasons” (performances on August 21, September 25, and October 23, ChicagoManual.style), a public artwork and installation in Lurie Garden. The movement-based piece, featuring dancers with costumes by designer Rad Hourani, engages with ballet history and Chicago’s prairie landscape to envision passages of time demarcated by the Japanese calendar.

Previously-announced, the 2021 season of Grant Park Music Festival (Wednesdays, Fridays, and Saturdays, July 2 – August 21 at 6:30–8pm, GPMF.org) will feature 21 classical music concerts at the iconic Jay Pritzker Pavilion. The Grant Park Orchestra and Chorus return to Millennium Park with a thrilling lineup of Festival favorites, including the Grieg Piano Concerto, the “New World Symphony,” the “William Tell Overture,” and “Prelude to the Afternoon of a Faun” – plus plenty of family fun with “Carnival of the Animals,” “Classic Broadway,” and the annual “Independence Day Salute.”

Across the street, the Chicago Cultural Center (ChicagoCulturalCenter.org) has reopened with new visitor amenities and exhibitions: “Jeremiah Hulsebos-Spofford: League of Nations” (through August 29) and “what flies but never lands?” (through September 6). “CHICAGO: Where Comics Came to Life, 1880–1960” will open on June 19 and “A Designed Life: Contemporary American Textiles, Wallpapers, and Containers & Packaging, 1951–1954” opened June 12 (through September 19) at both the Chicago Cultural Center and Expo 72 — presented by the Design Museum of Chicago (DesignChicago.org). Free public programming continues with virtual and in-person tours, a series of “Meet an Artist” events in the redesigned Learning Lab (12-2pm on June 25 & 26; July 9, 10, 23 & 24; and August 13 & 14), Dame Myra Hess Memorial Virtual Concerts presented by the International Music Foundation (IMFChicago.org), and Cinema/Chicago’s virtual Summer Screenings (ChicagoFilmFestival.com). BUDDY (Hi-Buddy.org), a new store created by the Public Media Institute, sells Chicago-made art, objects, and more — with special events on June 19, 20 & 27.

Ways and Means is a Facility Artwork conceived and created by Nick Cave and Bob Faust (FacilityChicago.org), presented by DCASE and the Chicago Transit Authority (CTA), on view through late June on the CTA Green Line. The project consists of eight fully wrapped CTA railcars and focuses on “ways forward and the myriad means we use to get there.” The interior of the railcars will also immerse riders in kaleidoscopic pattern created from Cave’s artwork, as well as the project statement.

The Chicago Riverwalk (ChicagoRiverwalk.us) will feature a new series of five large-scale banners near Michigan Avenue — artist Andrea Carlson’s You are on Potawatomi Land. Art on theMART (ArtontheMART.com) continues to project its spring program nightly, exhibiting works by the Adler Planetarium and select images from current exhibitions at the Art Institute of Chicago. Hope is a Light: Select Works from the Chicago Public School Class of 2021 runs through June 26 and three new commissions in alignment with the Year of Chicago Music will launch the summer program on July 5.

Fireworks will return for this year’s Fourth of July holiday weekend. Details including the date, time, and new viewing locations along the lakefront will be announced soon.

The Department of Cultural Affairs and Special Events (DCASE) is dedicated to enriching Chicago’s artistic vitality and cultural vibrancy. This includes fostering the development of Chicago’s non-profit arts sector, independent working artists and for-profit arts businesses; providing a framework to guide the City’s future cultural and economic growth, via the Chicago Cultural Plan; marketing the City’s cultural assets to a worldwide audience; and presenting high-quality, free and affordable cultural programs for residents and visitors. For more information, visit chicago.gov/dcase.

Tomorrow: Chicago's Critically Acclaimed Post-Punk Duo, Bellhead, Release Latest EP "Dead Lights" On All Platforms One Of The BIG FOUR, Anthrax, Turns The big 4-0 This Year And Celebrating With A Livestream Like No Other