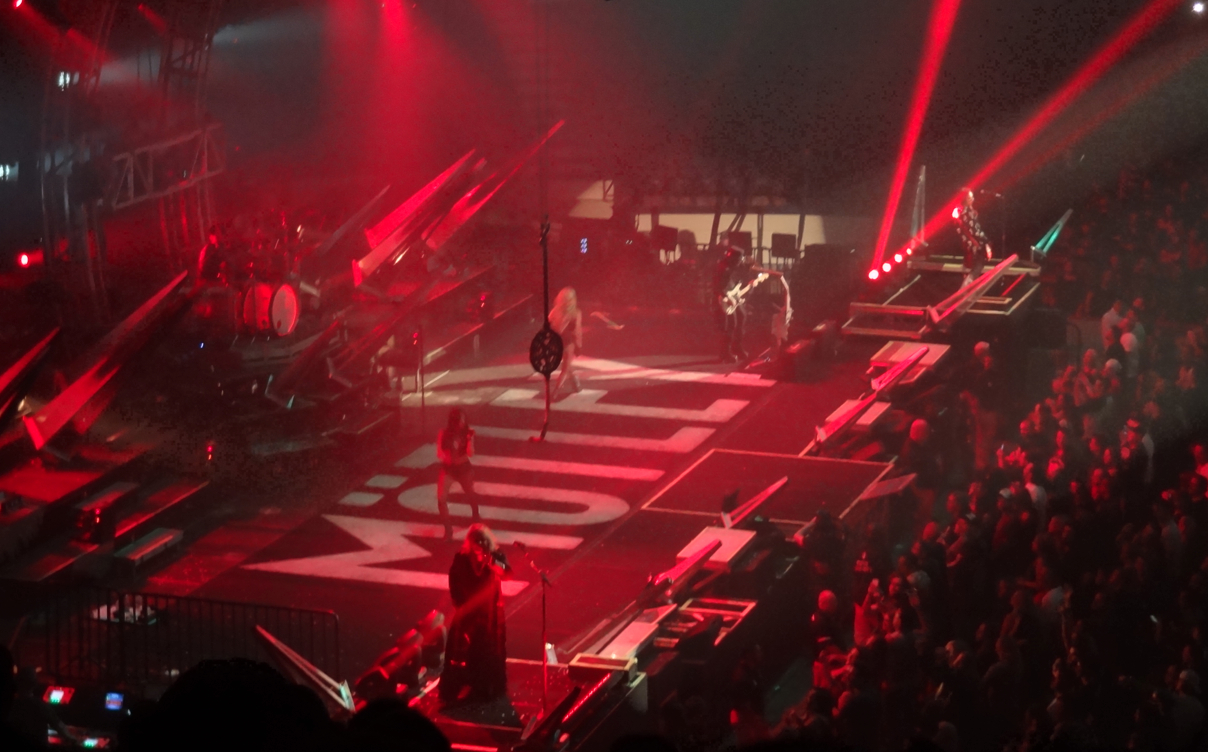 Saturday night, August 8th, 2015.   The final Mötley Crüe show ever in the Chicagoland area is about to take place. The tour officially titled, The Final Tour “All Bad Things Must Come To An End”. The crowds started arriving early. The parking lots were filling up starting at 5:30PM!

The opening act for this tour is a little band called, Alice Cooper. Yeah, that Alice Cooper. The “Schools Out”, I’m Eighteen” and “Feed My Frankenstein” iconic rocker from Detroit whose career spans five decades. I’m still trying to figure this one out. Not that I’m complaining. I love Alice Cooper as much as the Crüe, but it just seems odd, for him to be opening for them, but that’s show biz.

Vincent Furnier and his band played an amazing set. So full of life, and death, as Cooper controlled the stage with his alter ego and incredible stage show. He blazed through 13 songs that included the above listed as well as, “No More Mr. Nice Guy”, “Poison” and “I Love The Dead” to name a few more. During his set, he was made into a 10 foot tall Frankenstein monster, danced with the dead and lost his head in a guillotine.   The 67 year old Alice Cooper still shows no sign of aging or retiring. Which is a good thing because if someone hasn’t yet seen his show, you still have time. And you need to!

After a small break, the lights dim again and we hear, “So Long, Farewell” playing. The curtain drops and with a flash and a bang, Mötley Crüe take center stage. The set is massive!  20 foot metal spikes stick up from the stage.  Pentagram logos on fire everywhere.  Raised platforms for the band to jump around on.  Robotic arms that Nicki Sixx, Vince Neil and Mick Mars jump in and jaunt out over the crowds and of course the white elephant in the room – Tommy Lee’s ginormous drum roller coaster racing down the middle and out into the audience.

The Crüe start with “Girls, Girls Girls” from 1987’s album of the same name and then they go right into “Wild Side”, also from the same album. This band still has the same raw power they’ve always had, visually and sonically. We’re in for a treat as we soon learn that they bust out tracks from their entire catalog (in the current, original lineup) with classics from Theatre of Pain, Dr. Feelgood, Saints of Los Angeles and all the way back to the very beginning with Too Fast For Love.  About the only thing off during this performance was Vince Neil’s singing abilities.  He hasn’t been able to hit those high notes for years, but tonight he seemed to forget lyrics at times too.

Of course no Mötley Crüe show would be complete with out a drum solo. And what a drum solo Tommy Lee gave. If you don’t know, Lee takes his drums to new levels. Literally. This time his drums are mounted to a rollercoaster. One that takes him out over the audience and back. The crawling kit rotates on a metal girder track that rolls him out spins him around upside down and lands on the other side to greet the audience he’s surrounded by. It’s a pretty amazing sight to see.

Click here for a video of the rolling steel and flesh monstrosity that is Tommy Lee and his drum kit.

After Lee’s drum solo and his return back to the stage, Mick Mars gets moment in the spotlight as he grinds through a guitar solo. The 64 year old can shred with the best of them. He may not get around much on stage, but that doesn’t matter. His playing ability is unmistakably Crue. He’s influenced many but always kept focus on what is true to him- the Crüe – and it still shows.

After the solo’s, they all come back for Saint’s of Los Angeles, Live Wire (TNT mashup), Dr. Feelgood and end with Kick Start My Heart.

They end with fire, lights, smoke and all the fanfare that is Mötley Crüe. They leave the stage, but the audience beacons for more.   Shortly after the pause, we see Tommy Lee come out and sit down at the white grand piano as his starts off the final song of the final show with, “Home Sweet Home”, that fades into Sinatra’s, “My Way”.

All though this band has built a stage show that warrants the size of All State Arena, it would really cool if the band had chosen to do the real, last final tour in the smaller clubs and venues they started in. An intimate close quarters rock show with diehard fans. I can only imagine Mick, Mars, Lee and Neil rocking the walls of the Aragon Ballroom. One of the first places they played in Chicago back in 1984. That would have been an amazing send off, but that’s just a dream. Or is it. Word on the street is that they have a few unofficial “final surprises” in store at the very end. Could this be one?

For more info about the band and final dates of the tour, click here.