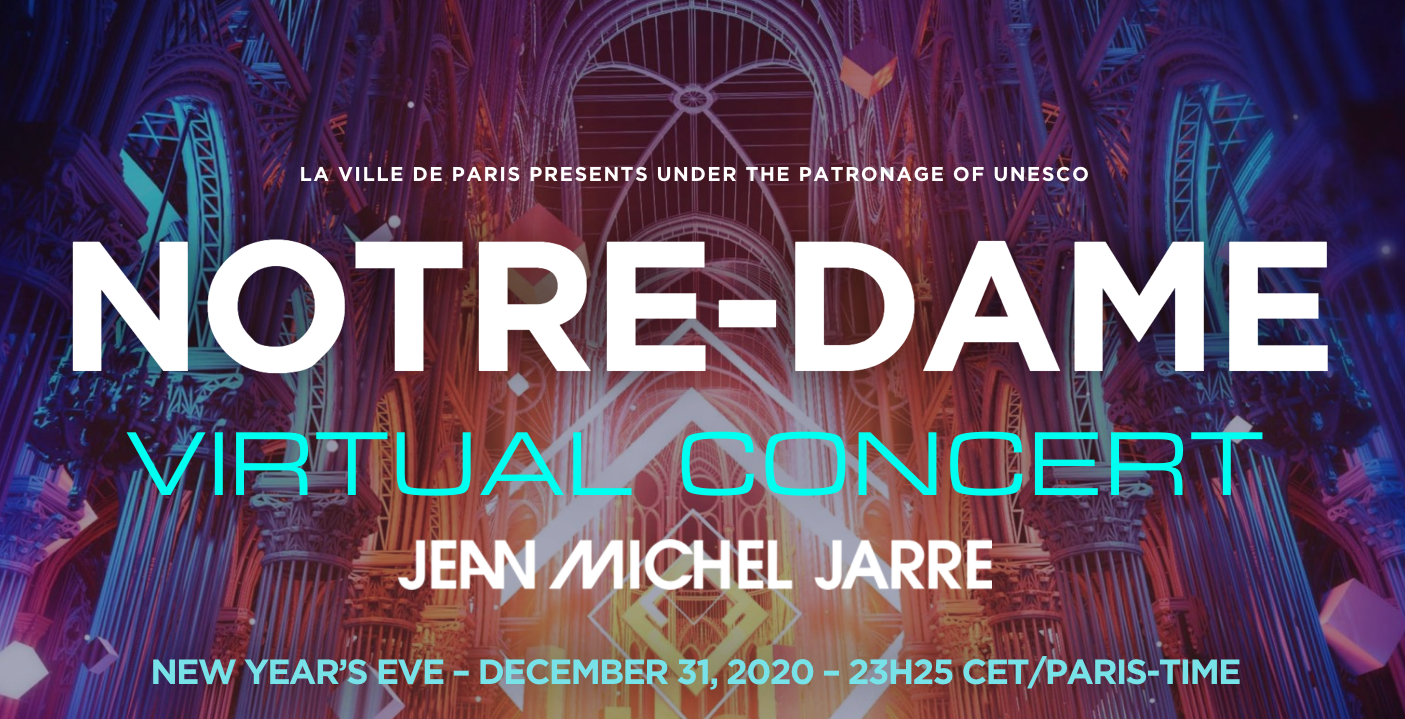 Since we’re all locked in at home this New Years Eve and no where to go, the world is open online for a virtual experience to remember as Jean-Michel Jarre will be mixing live at the historic Notre-Dame in Paris France.

In partnership with the City of Paris, and under the patronage of UNESCO, Electronic Music pioneer Jean-Michel Jarre teams with French VR start-up VRrOOm to take us into the New Year with a Live-stream trailblazing concert-spectacular set in the virtual environment of the planetary landmark, Notre-Dame de Paris. The unique visual world created by Jarre in VR will also be the official midnight news image coming from the City of Paris.

“Welcome to the Other Side” is a one-off exclusive, worldwide and open-to-all, free concert experience whose ambition, beyond celebrating the New Year in a futuristic and festive way, is to send a message of hope for 2021: a digital and virtual invitation from Paris, the City of Light, vibrant metropole of the Arts & of Culture and home to the most famous cathedral in the world. Notre-Dame has a unique place in the collective imagination, it is a symbol of the strength and of World Heritage that binds us together.

Jarre’s virtual concert-spectacular invites us all to ring-in the New Year together and social virtual reality gives the possibility to party together, wherever we are, including all who are socially or geographically isolated.

The Live-stream experience on December 31, will be produced as a cutting-edge simultaneously-mixed-media creation: welcome to other side of reality, welcome into the New Year, welcome to your own personal celebration, welcome to a global party, all via your own chosen dimension:

Jean-Michel Jarre will perform live from a studio near the Cathedral in Paris, whilst his avatar plays inside a virtual Notre-Dame.

The 45-minute concert that Jarre will perform will be comprised of tracks from his recent Grammy-nominated opus Electronica, as well as new reworked versions of his classics, Oxygène and Equinoxe.

The audio of the concert will be released on 01.01.2021 0:15am CET on all music streaming platforms under the title “Welcome to the Other Side – LIVE”.

Jarre, whose legendary concert-spectaculars have broken world records in attendees and took place at some of the globe’s most renowned landmarks throughout his outstanding career, have left their imprint on world-class entertainment. “Welcome to the Other Side” is an invitation to enter the other side of the mirror and to travel from the physical concert world into a virtual fantasy world.

Jarre’s visionary creativity in partnership with VRrOOm’s VR designers come together here to create a concert-spectacular that is nothing short of his benchmark outdoor performances and above all a milestone today in setting new standards for music entertainment tomorrow.

“Virtual reality is to the performing arts today what cinema was to the theatre in its early days, a kind of curiosity. I believe that VR will become tomorrow, a mode of expression in its own right. » Jean-Michel Jarre

Play it loud and watch it on a big screen !

Designed by VRrOOm,
Produced by the City of Paris
Under the patronage of UNESCO
In partnership with Radio France & BFM TV / BFM Paris