Dark Electro Pop Artist, Tove Lo, Worth Dropping Everything To Witness Live, Damaged Appendage Or Not 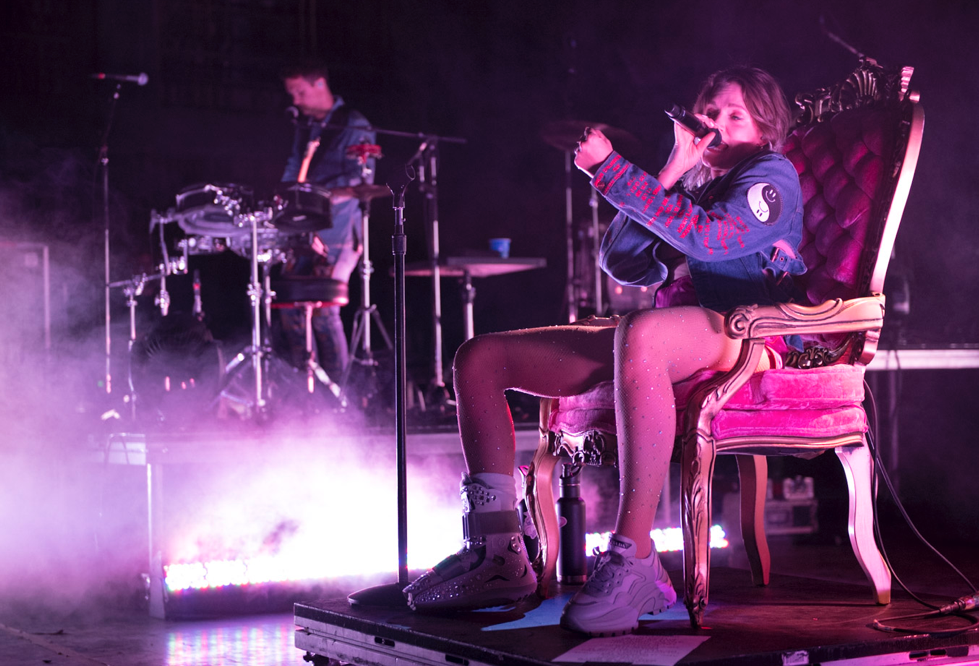 Yesterday, I was in the middle of Pandemic during game night at work when I received the nod to cover Tove Lo’s show at the Riviera Theater. As anyone who’s intrigued by dark pop queens from Sweden often does, I jumped out of my chair, grabbed my coat, and booked it to the Purple Line intent on making it to the show on time. When I got to the Riviera, I saw that the show was sold out and that the line for it wrapped around the block all the way down the street. Slotting myself into place, I buckled in for a long and frigid wait until the doors opened. Fortunately, the line moved fast and before I knew it, I was shepherded to the press table where a stern lady checked me in. Opening the doors, I joined the vast crowd of people who all swarmed to the front of the stage. They were dressed in their trendiest finery while I stood among them looking sheepish in my normal button-down shirt. Regardless of the threaded disconnect, the rabid crowd swelled until I was pressed against several people, two of which were a couple of women loudly complaining about the size of the crowd. While I was scrunched in their midst, I pulled out my phone and quickly acquainted myself with Tove Lo, her music, and that of her supporting act, Alma.

I should say that while I indeed was going in semi blind, I did have a passing acquaintance with Tove Lo’s music. I had heard some of her songs on the radio and generally liked what I heard, and then relegated her music to the edgy Scandinavian pop music, the kind that Anna of the North, Robyn, or Lykke Li make. But after looking her up and listening to the frenzied chatter of the crowd, I soon realized that I was in for a properly satisfying show.

Soon, the house music died down and the Finnish singer Alma burst onto the stage, bathed in red light. Accompanied by a DJ, the neon green-haired artist opened her set with the song, “Have You Seen Her?”, one of those pop songs that have a sparse, pulsing beat. It was a safe song to start with, but her second song, “Bad News Baby” allowed her to really kick her set off. Punctuated by a rollicking beat and catchy chorus, the song’s relentless energy had everyone swaying to the rhythm. In fact, every song in her set was an absolute whirlwind as she roared across the stage, singing in a raspy but thunderous voice. Although only accompanied by playback music, her fierce energy, exuberance, and charm throttled the audience until she soon won us all over. In between her songs, she joked and effusively praised the crowd and Chicago, emphasizing how this was her first time ever playing in the city. Altogether, Alma took the stage by storm and just went for it on her entire set, especially with other phenomenal songs such as “Cowboy” and the banger “Chasing Highs”. Even though she isn’t more well-known, I wouldn’t doubt her next return headlining a show at the United Center.

After Alma’s set and a brief interlude, the lights dimmed, the band emerged, and then Tove Lo hobbled out graciously to the stage on made her way to her throne. This, after breaking her ankle in a prior show, she’s still going strong with her custom made boot. The music boomed when she opened her “Sunshine Kitty Tour” with “Glad He’s Gone” and sang from her throne. The crowd went wild when she appeared (almost louder than her booming music). Soon, my view was utterly blocked by a sea of waving hands and phones and I was getting jostled all over the place. Regardless of the crowd though, Tove Lo burned through the first third of her set with some pretty standard pop songs, out of which “Bad as the Boys” included Alma joinining her onstage and “Are U Gonna Tell Her” with its dancehall Brazilian beat. The middle third of her set, though, turned the dial to steamy when Tove Lo unleashed her boldly sexual classic “Talking Body” with its punchy, driving chorus. It was during this song that, while the crowd was dancing to the music, she hiked up her shirt, flashed the audience in traditional fashion single-handedly turned all the boys in the crowd into men. The crowd went wild, but I couldn’t see anything because of the wall of phones. But whatever the issue, her sexual gyrations paved the way for a dynamite final third of her set.

After finishing “Disco Tits”, Tove Lo reached to the latter third with a solo-piano version of her epic song, “Moments”. But right before she began playing, she took a moment out to lay bare the amount of work she and her team put in to make sure their live show was perfect. It was a moment of vulnerability, especially when she joked about how she was a lackluster pianist and apologized beforehand about any mistakes she would make. But regardless, “Moments” was great. It was a soft and touching song, buoyed by her soaring voice. But then, she followed it up with a string of absolute bangers such as “Hey, You Got Drugs?”, “Bitches” which included Alma again, and finally, “True Disaster”, the best song of the night. It is an utterly epic pop song with a relentless melody, incredible chorus, and quite simply, a badass grunge beat. Soon, Tove Lo hurtled towards the finish, forgoing the break between her main set and the encore due to her broken ankle, and dove right into the encore. She finished the show with her new song ”Bikini Porn” and bade farewell to the crowd amidst thunderous applause.

Between Alma and Tove Lo, it was a flawless pop show. Both singers fired from all cylinders during their sets with hardly a dull moment, despite physical handicaps. Everything about the show was staged perfectly, from the fiery visuals accompanying the volcanic fury of Tove Lo’s music to the dominant stage presence of both artists. They actively connected with the crowd, especially with Tove Lo calling out to several friends in the audience and Alma cracking Ikea jokes about a malfunctioning mic stand. After seeing a good number of shows, bands and artists, it was refreshing to see two artists who genuinely enjoyed putting on a great show.

In the end, I was fortunate to see Tove Lo and her opening act, Alma. I have always been a little wary of popular music, but after seeing Tove Lo and hearing her music at the Riviera Theater in person and largely for the first time, I can now say that I’m a fan. A day later, I am still blown away by how much energy she poured into her performance even though she was sitting on her throne for most of the show! If Tove Lo and Alma, are the new frontier of pop music, then I believe the genre is in good hands. The boldness of Tove Lo’s lyrics, the pride in her stage presence, and the epic sweep of her music all combined into one of the best shows I’ve seen this year.

For photos from the show at the Riviera, click here