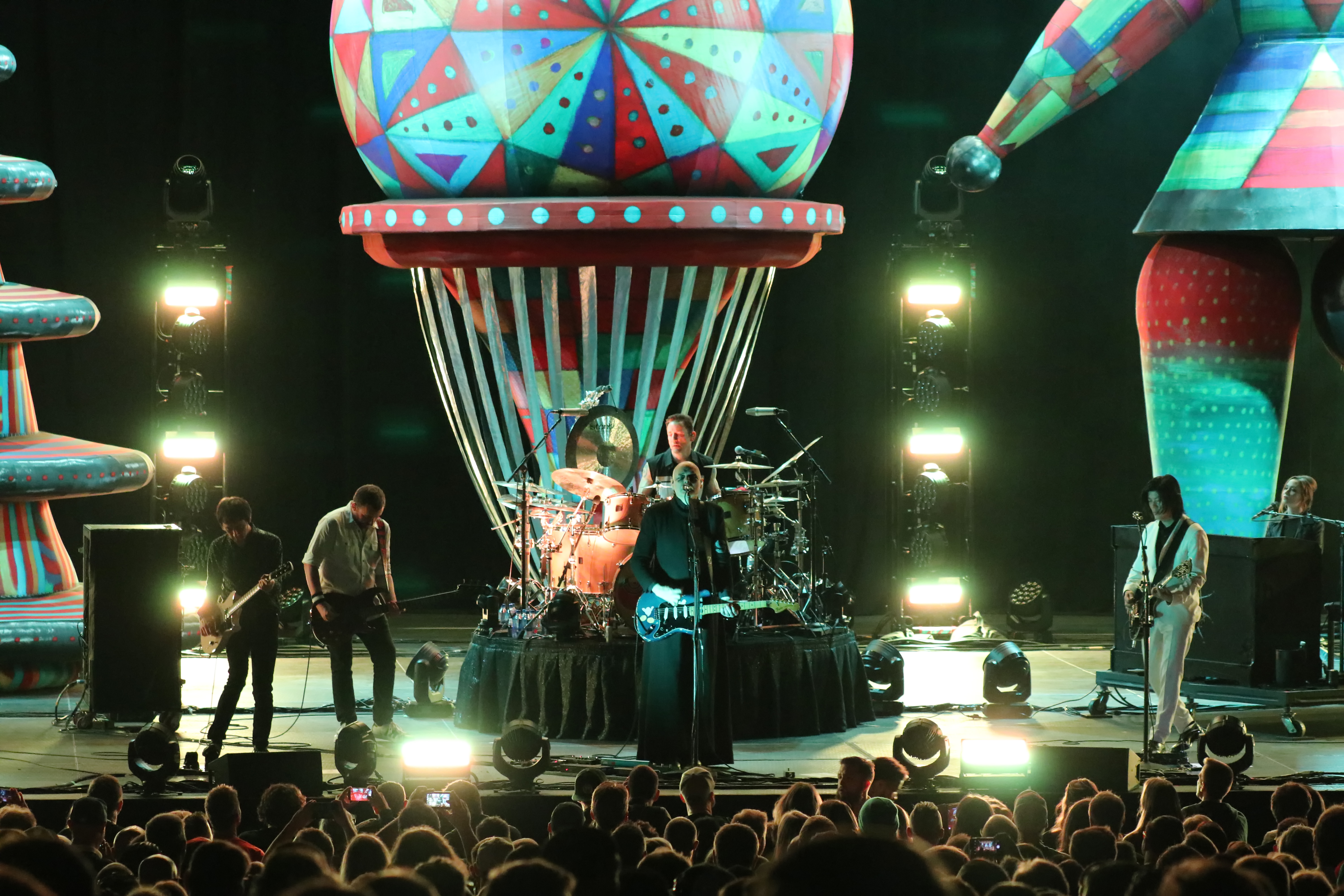 It would be easy to start the recap of Thursday’s barnstorming show at Tinley Park with some sort of schmaltzy nostalgia language referring to the ‘90s.  But that would be lazy, and it would do a great disservice to Noel Gallagher, Billy Corgan, and the members of both the High Flying Birds and The Smashing Pumpkins.  Thursday’s show was a transcendent display of two bands in top form that now fully exist outside of the generation in which they came to popularity.

As far a cry from Oasis as one could imagine while still retaining the hotspots of his pop roots, Noel Gallagher’s High Flying Birds dabbled in psychedelia and soul for the first half of the set, which saw the captivating drone-riff of “It’s A Beautiful World” and the funky “Keep On Reaching” show the crowd just how deep Gallagher’s box of tricks actually goes.  Leading with five tracks from 2017’s Who Built the Moon, the second half of the set went full-Oasis, with singalong after singalong; indeed, any band would be lucky to have “Wonderwall,” “Stop Crying Your Heart Out,” and “Don’t Look Back in Anger” in its catalog.  The reach of Gallagher’s newest outfit was perhaps best showcased on the stomping “Holy Mountain,” which saw a horn section accompanying Beach Boy-style ‘woo-ooos’ behind the kind of driving melody Gallagher can so effortlessly craft; it’s a song that would fit on any Oasis album with a different arrangement, but as it is, there was so much more that it was refreshing to see the way in which he clearly set out to shatter the conventions of anyone expecting the obvious.  In a way, the co-headlining outing of the summer made even more sense within five minutes of Noel and the Birds taking the stage.

Because when it comes to shattering convention, is there anyone more up to the job than Billy Corgan?

The Smashing Pumpkins took a brightly lit stage with one of the most jaw-dropping backdrops in recent memory, as three rainbow colored, inflatable matryoshka dolls loomed over the band, providing a visual centerpiece to the Pumpkins’ set that was a perfect balance of new, old, and rare.  The nesting dolls were a perfect symbol for Corgan & Co.’s music, which remains layered and deep in a way that none of their peers ever came close to.  The hits sounded fresh and playful, and Corgan exchanged smiles all night with guitarists Jeff Schroeder and James Iha, who traded plenty of licks on “Solara,” the electro-pulse of “Eye,” and the blazing “Superchrist,” a deep cut if ever there was one.  “Tiberius,” the opener from 2014’s overlooked Monument to an Elegy, was a vibrant dose of energy leading into “G.L.O.W.,” another overlooked gem from the late 2000s (a period of untethered creativity for Corgan that produced some of his best work).  It’s clear since last year’s Shiny and Oh So Bright tour that saw the official reunion of Corgan, Iha, and Chamberlin that the band has been on a creative tear that both celebrates the past and acknowledges the need to push forward.  A full-band reworking of James Taylor’s “Fire & Rain” was poignant and sobering, and the Pink Floyd coda to the rarely played “Blue Skies Bring Tears” was right at home before they engaged the crowd in a choral singalong of “Cherub Rock,” which was followed by perhaps the night’s biggest shocker: the Sabbath-crunch of “The Aeroplane Flies High,” which should have satisfied any die-hard from here all the way back to 1995.

“We’re thirty-one years and still going strong, thanks to you,” Corgan smiled; it was a fitting testament to the dedication of their fanbase, but it also served as a reminder as to how Corgan’s musical vision has carried The Smashing Pumpkins through multiple iterations and into the space they now occupy: both of their time and completely timeless, a band that can effortlessly bring tears and incinerate all at the same time.

She Taught Me How to Fly

This is the Place

Stop Crying Your Heart Out

Don’t Look Back in Anger

All You Need is Love (The Beatles)