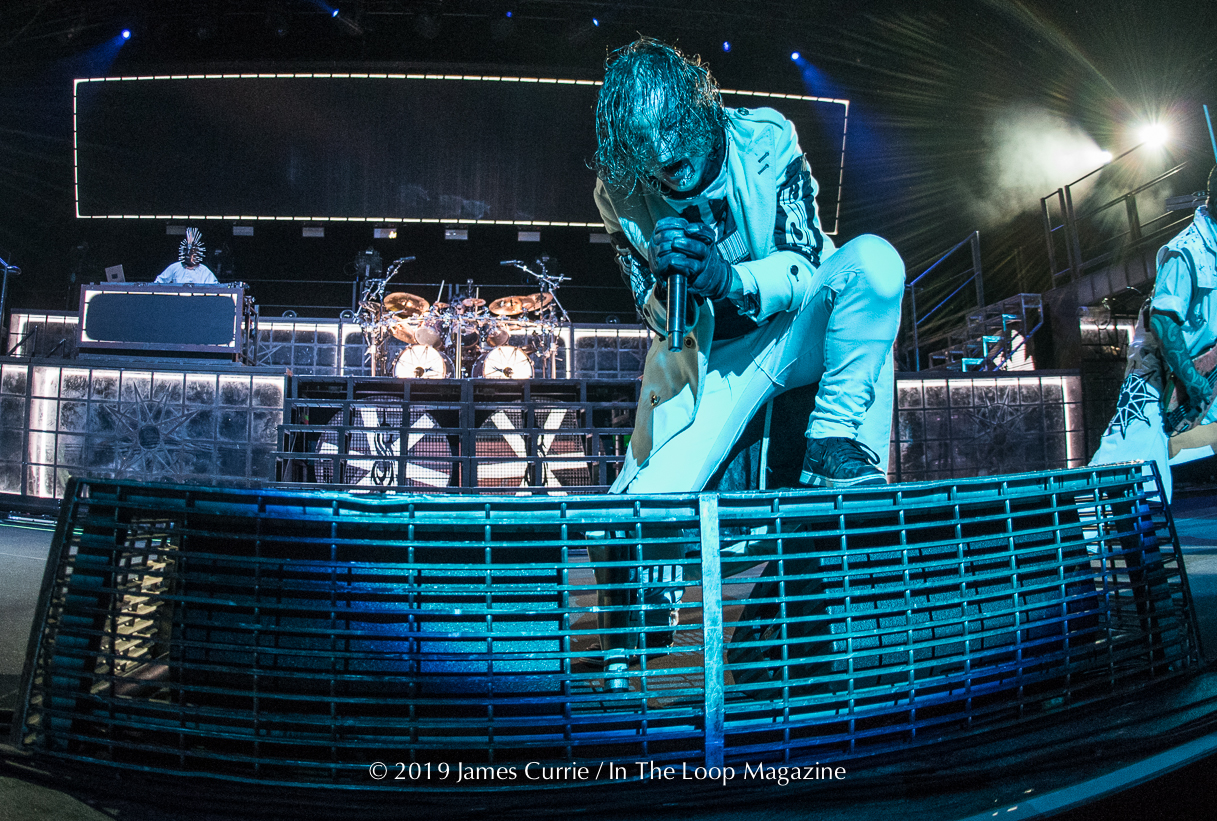 Even in the diverse world of musical genres and subgenres, attaining mainstream respect can still be a dicey prospect for a metal band. Metal is still considered the outlaw’s music, in many ways, and mainstream success can be an unforeseen blessing—bigger shows, wider reach, more album sales—or a curse with cries of ‘sellout’ attached. Rare is the band that achieves the former, but doesn’t see the latter. Slipknot is perhaps the last band standing in the unique position of having massive mainstream success (dare I say, respect) at a level most bands never see and also dodging the sellout conversation at nearly every turn.

The reviews were in for new album We Are Not Your Kind before their stop in Tinley Park on Sunday as part of their “Knotfest Roadshow” tour, and the reviews were universally positive, with critics largely hailing it as a masterpiece or a giant leap forward in terms of focus and maturity. (It is both of those things and much more.) But in light of that, if the band felt the need to prove itself, they didn’t show it in the blistering ninety minute set that pulled largely from their back catalog while hitting some brand-new hotspots. Mainly because the only audience Slipknot clearly feels the need to prove themselves to is…themselves.

Taking the brightly lit stage to Iowa classic “People = Shit,” vocalist Corey Taylor had the crowd in the palm of his fist within about thirty seconds, and it never let up from there. One of the most dynamic, relentless frontmen in popular music, Taylor took a few minutes here and there to reflect on Slipknot’s twenty year career in visiting Chicago.

“This city is so close to our home that it feels like home to us,” he remarked at one point, and it’s not hard to believe. Cutting their teeth across the Midwest for their first few years before coming to dominate the American metal scene with the release of 2001’s Iowa, Slipknot have played Chicago more times than this reviewer can count over the years, though Sunday’s show felt like an elevated moment even when measured against that history. New songs “Unsainted” and “All-Out Life” went over like wildfire and felt like they’d been the set for years, and the live debut of new album closer “Solway Firth”was one of the most savage moments of the night, with guitarists Jim Root and Mick Thomson trading understated, creepy licks before each bombastic chorus.

In the few years since the last tour, percussionist Chris Fehn was ousted, and in his place, a mystery member referred to in jest by the fans as “torilla man” has stepped in, filling that spot on the kettle drum riser quite well while wearing a mask that appears to be made of tanned, stitched flesh. The band’s new look—white, inmate jumpsuits and some of the more disturbing masks in their history—made the visual element of the show that much more exciting.

DJ Sid Wilson (#0) danced and cavorted about the stage as usual, but his outfit this time around – a boxer’s robe and a mask that looks like the hollowed out face of an old man, with creepy articulation of the eyes and mouth – was off-putting in the best way. The staging is the band’s most ambitious yet, with video screens that wrapped around the drum risers, backdrop, and overhead canopy of the stage (even the kettle drums on both Tortilla Man and Clown’s risers had video screen overlays, which made for some suitably trippy moments during slower burns like “Vermilion” and “The Devil in I”).

The band dipped into 2009’s All Hope is Gone for “Sulfur,” one of Slipknot’s most underrated singles, before diving into an amphitheater-sized singalong of “Duality,” arguably the band’s biggest hit. A paean to coping—successfully or otherwise—with the lunacy of one’s everyday life, the song has never felt more relatable, given the current state of the union. If the barely contained rage spilling off the stage has ever had a more fitting context, I don’t know what it would have been.

“Here’s an unexplainable one,” Taylor roars in the chorus to the aforementioned “Solway Firth,” and it’s an apt summation of Slipknot’s career. Nine guys in creepy masks from Des Moines, conquering the world with some of the angriest, most violent, politically and emotionally charged metal the genre has ever seen, and in the process, becoming one of the best live bands to ever draw upwards of 20,000 people a night. If you’re smart, you’ll be in that number next time they come through: Slipknot’s position as one of the best and most important bands in heavy metal has been solidified, if it was ever in question to begin with.

For photos of Slipknot live at Knotfest at Hollywood Amphitheatre in Tinley Park, IL, click here