Concert Review: Interpol Live In Chicago At The Chicago Theatre 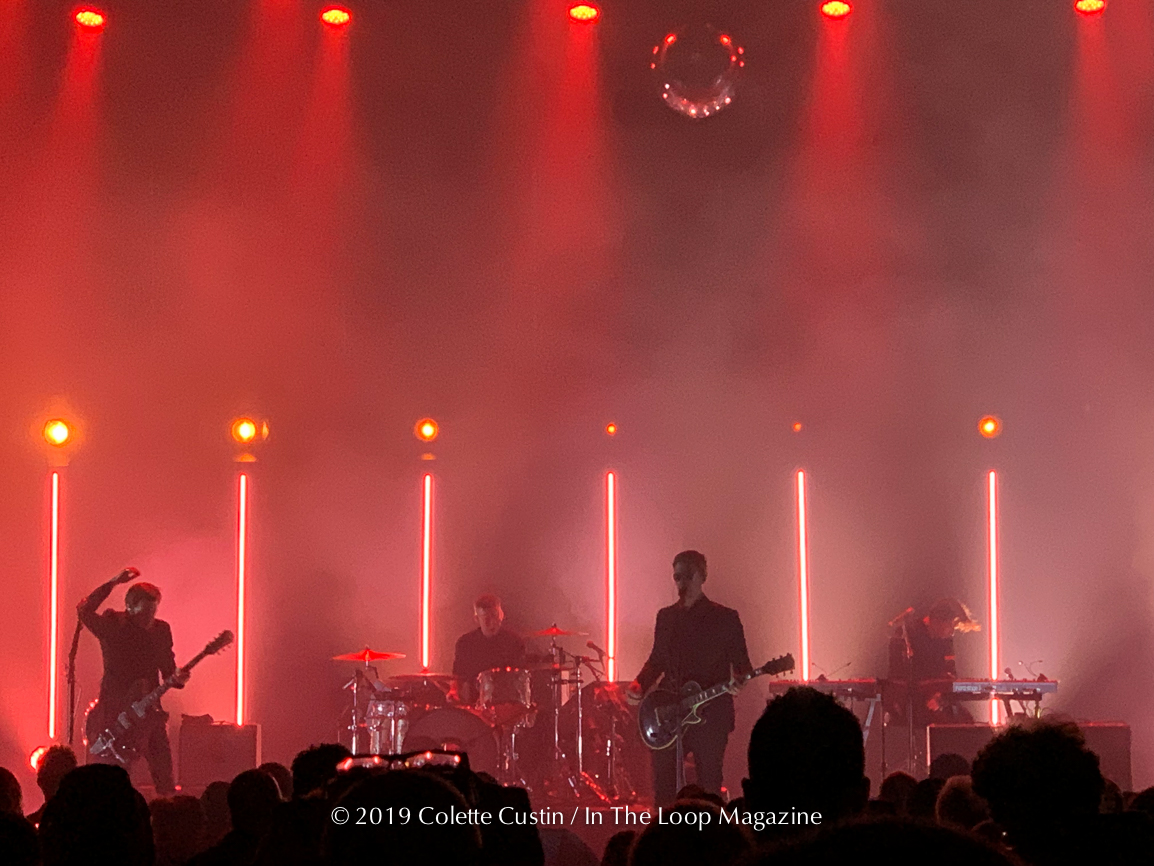 For some bands, atmosphere is a game-changing element of their live set. When Interpol headlined night two of Riot Fest immediately following the release of their sixth (and arguably strongest) album Marauder back in September, the dark lighting and moody tone of their set was somewhat lost on a crowd that was already a solid nine hours into a hot festival day. Which was part of what made their sold out show at Chicago Theater on Thursday such a stellar experience for both die-hards and casual fans alike: this is a band that thrives in a theater setting.

Vocalist/guitarist Paul Banks, guitarist Daniel Kessler, drummer Sam Fogarino, touring bassist Brad Truax and keyboardist Brandon Curtis had the capacity crowd on their feet from start to finish with a light show that was at times spacey and warm, at times icy and mysterious. To their credit was the fact that, even though this is a tour in support of last year’s Marauder, the setlist touched on their entire discography (leaning perhaps most heavily on the new record and 2004’s sophomore outing Antics), which offered a strong sampling of everything the band is good at – shimmery guitars, subtle twists in melody that pick up where Joy Division and New Order meet, and rhythm heavy arrangements that really shone on new tracks like “Number 10” and album opener “If You Really Love Nothing.” Whereas early in the band’s career, much of the musical interplay at the core of their sound came down to Fogarino and former bassist Carlos Dengler’s drum and bass arrangements, guitarist Daniel Kessler’s chiming, sidewinder guitar lines now take center stage on a more consistent level, opening up the band’s sound a bit more.

Interpol has been in the game for nearly twenty years now, and their entry at a point when American rock music was finding new footing with the likes of The Strokes, The Kills, The Hives, and other retro-styled, garage-rock enthusiasts made the NY foursome outliers, in a sense; their suited appearance and droning guitars called to mind early new wave as well as elements of the New Romantic movement, and it would be fair to say that they didn’t always a get a fair shake when it came to evaluating their place in the contemporary scene. Now they’re six records in, and in this reviewer’s eyes, the depth of their catalog was made truly apparent on Thursday when taking the setlist track for track; “NYC,” a contemplative love letter to the band’s home, has aged beautifully, taking on an almost lullaby quality, and Banks’ was nearly drowned out by the crowd’s collective voice during “Evil.” The minimalist staging made up of white-lit bars on alternating red and blue backgrounds, accented by a trio of mirror balls and strobes that would either usher in one’s best trip or worst one, depending, was a perfect accompaniment to Banks’ lyrical dance between angular, romantic sentiments on “Slow Hands” and the thoughtful, passionate ebbs and flows of “Take You On a Cruise,” one of the band’s finest hours. At the end of the night, it was oddly satisfying to get the sense that Interpol have eclipsed most of their contemporaries and have endured to become one of the most engaging voices in alternative rock.