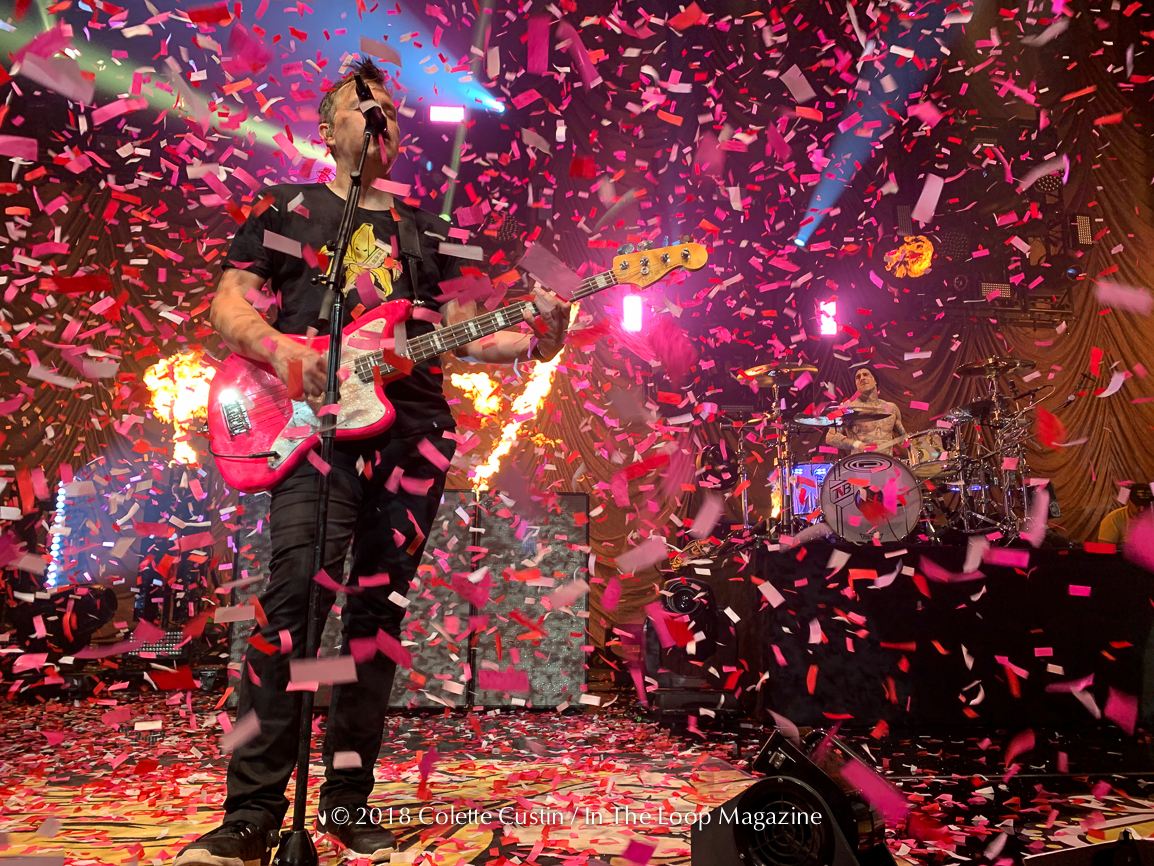 Just a few short months ago, Blink-182 held a headlining spot at the Chicago festival as well as a residency at the Palms in Las Vegas, a weekend series of shows that was to span several months. Then, drummer Travis Barker’s health issues derailed the punk-pop trio’s plans for summer lovin’, calling their Riot set, the Vegas residency, and even the band’s future into question. The band’s headlining slot at Riot Fest was cancelled…but the Vegas residency returned (after being indefinitely postponed) in light of Barker’s ‘all-clear’ diagnosis.

As Chicagoans who had looked forward to covering the band’s Riot set, we asked ourselves: what, as huge Blink fans, were we to do?

The answer was as clear as a pair of airline tickets.

So, In the Loop Magazine’s “On the Road Series” correspondents Colette Custin and Christopher David hit the skies to catch one of the final weekends in Blink-182’s “Kings of the Weekend” residency shows, and the verdict? Bassist/vocalist Mark Hoppus is a tornado of youthful energy who still revels in dirty jokes, guitarist/vocalist Matt Skiba solidified his place as a commanding presence in the trio, and Barker proved that you nothing can keep him from being the most entertaining drummer on earth. The band remains one of the most fun live acts out there, and their catalog is formidable by any genre’s standards.

Vegas residencies tend toward the huge, the flashy, the bombastic; there’s a reason that they’re generally the provenance of KISS, Cher, and other pop powerhouses with decades of history and pomp behind them—it’s an opportunity to cash in, in many ways, on a style of show that differs greatly from the rigors of the road. Admittedly, the idea of a punk band embarking on a Vegas residency is a bit strange—and make no mistake, Blink have always been a punk band at heart, despite their massive global success. But given that Blink’s songs focus primarily on the joys and perils of partying, sex, and relationships, with a hefty dose of explosive, relatable teen angst, their presence on a Vegas stage may be a generational turning point, an indication that a Vegas residency is no longer just the domain of crooners and preening popsters.

That moment was clarified during a thrashing version of “Dumpweed” as a dozen or so giant pool inflatables were thrown into the crowd. The sight of several hundred ecstatic fans singing along while tossing around giant pieces of pizza, sex dolls, and unicorns suddenly brought clarity to the whole thing—Blink have ascended to a level of generational popularity at a level that arguably has only been seen by the likes of Green Day: a punk band that, by writ of its crafty songwriting, subtle maturation, and endearingly goofy antics, has moved past punk into part of the rock n’ roll pantheon. It was impossible not to smile, and it was impossible not to sing along as a constant barrage of flames, confetti, and streamers turned the Pearl Theater into a 2,500-person party.

The elephant in the room—or perhaps octopus, in this case—was Barker. Would he be okay? Was he still the same powerhouse everyone wanted to see? The answer came within seconds of the band hitting the stage. Unless you already knew that he’d had health issues earlier in the year, you’d have never guessed it in his performance. Extended versions of “Down,” “I Miss You,” and “Stay Together for the Kids” showcased codas that seemed expressly designed to let Barker show off the stunning precision of his chops.

Opening the show with an energetic version of “Feeling This” from 2003’s self-titled album (an underrated record in the grand scheme of things, perhaps due to the fact that it’s when Blink got ‘serious,’ in many ways) and following it with a string of hits that most any band would envy, “Anthem Part Two” featured Matt Skiba on vocals, and while founding-guitarist Tom DeLonge’s particular nasal vocal quality was noticeably missing, Skiba is the best fit one can imagine to fill that role, given his deep history in Chicago’s punk scene as the driving force of Alkaline Trio. He was also a driving force in new tunes “Parking Lot” and “Bored to Death,” which are perfect distillations of Blink’s signature sound since classics like 2001’s “First Date” and “Reckless Abandon,” both of which were set-list standouts. When Hoppus took the lead to introduce the hysterically absurd “Happy Holidays, You Bastard” by having the crowd shine their cellphone flashlights, he barely had the chance to finish the song before dissolving into laughter, and he spent the majority of the show mugging with fans and jumping around like a twenty-year old. Inviting fans (and even a newly-married couple still in their wedding garb) onstage to sing set closer “Dammit” showed that Hoppus and Co. still don’t take themselves too seriously.

Which is a good thing. Noting the age of the crowd as the band closed the show with “All the Small Things,” it was hard not to be reminded of what a cultural touchstone Blink-182 was during the last days of MTV’s role as a tastemaker. With a Vegas residency behind them and the number of fans who came from all over the world to see these shows, there can be no doubting the relevance of the band’s history.   With a new album in the works and a tour including a headlining spot at Riot Fest, 2019 is shaping up to be another banner year for a band that, happily, hasn’t let their youthful fire burn out. What’s their age, again?

Kings of the Weekend

Stay Together for the Kids (Saturday)

All the Small Things