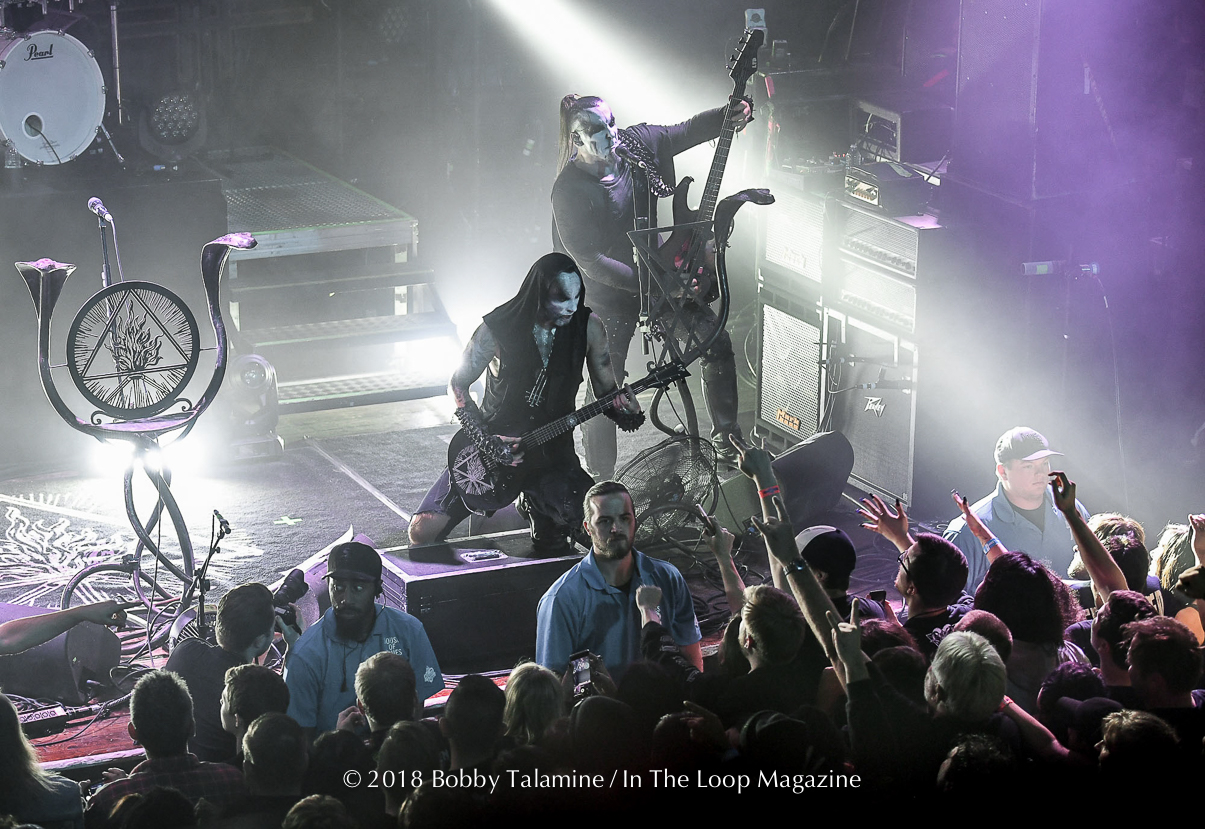 Poland’s blackened death metal band are back in town, more fierce than ever. Nergal and his bandmates are touring North America in support of their new release “I Loved You at Your Darkest”, which continues to elevate the stature of Behemoth, if that is at all possible. Joining them at the House of Blues in Chicago are Swedish metal stalwarts At the Gates, and also Wolves in the Throne Room.

The dark and sinister mood is set early before Behemoth take the stage, with haunting children chanting in a refrain of “I shall not forgive” over the PA, and with the drone of eeerie string arrangements, some of which sound a striking tone of early Dead can Dance
instrumentals. Most of the crowd waiting for Nergal and Behemoth to hit the stage were shouting it up, with shouts of “Satan!” filling the air, with the occasional “Slayer!” thrown in as well.

Behemoth take the stage wearing dark masks, opening to the new song “Wolves ov Siberia” from their latest release “I loved You at Your Darkest”, one of a few new songs that Behemoth would play during their performance. The band followed with “Daimonos” after
removing their masks and revealing their tried and true corpse painted faces, followed by the even more diabolical “On Pro Nobis Luifer”. The enchanted and ravenous crowd at the House of Blues was eating this up, with circle mosh pits popping up at a moment’s notice. Have to say at this time I’ve never seen the House of Blues photo pit this packed. I counted twelve photographers total, let alone 4 security, making things quite difficult navigating from one side of the stage to the other. I bailed midway through the third song, having been crunched by a body surfer and knocking some gear out out of my hands. I found refuge up in the first balcony after gaining my composure, to witness Behemoth’s brilliant set until its closure.

Behemoth simply are  one of the best live acts in their chosen genre of metal out there currently touring today, in all of metal for that matter. That’s not an understatement. That’s a fact. Nothing is left for chance when it comes to their live performance, with sophisticated
lighting, stage props, cobra microphone stands front and center, and a drum kit that has to be eight feet off the ground. All of this happening on a cozy stage at Chicago’s House of Blues? Now that’s saying something. A powerful force of nature- that’s
without a doubt Adam “Nergal” Darski, who simply is one of the best metal frontmen around, combining a look that’s downright frightening, with lyrics embracing the occult and thelemic themes of a vast wasteland which envisions no chance of recovery.

If you as an artist with this line of reasoning, your commitment better be total, for it’s easy to see the cracks in the genre with sub par talent and craft, making your performance laughable. Clearly that’s not the case with Nergal and Behemoth, who with each passing jaunt across North America, whether it be in support of Slayer, or also at Chicago’s Open Air a couple years ago, just simply keep
getting better and better as a live act. It helps to have bandmates who are all in providing the punch that is needed: Orion on heavy bass,
the thunderous and pummeling drums of Inferno, let alone the bone crushing riffs on guitar from both Seth and Nergal.

The floor of the House of Blues is packed to the core, and again from my vantage point from up in the first balcony, circle mosh pits were everywhere for each song, let alone body surfers of all shapes and sizes adding to the excitement. This is without question a performance
for the ages, showcasing extreme metal mastery from beginning to end.

Exhausted and complete, that’s how I feel about what I witnessed. Having Swedish metal pioneers At the Gates on the bill for support just adds more oomph to the evening: these guys easily being headliners in their own right, and the fans were treated to an incredibly strong
(but all too short) set of some of their best material. Openers Wolves in the Throne Room also came out guns blazing, showing yet again that metal is alive and well from the great northwest, and staying true to their signature style of American black metal.