Rare Appearance By Australian Swamp Rockers, The Scientists, As They Embark On First Ever U.S. Tour With Stop In Chicago 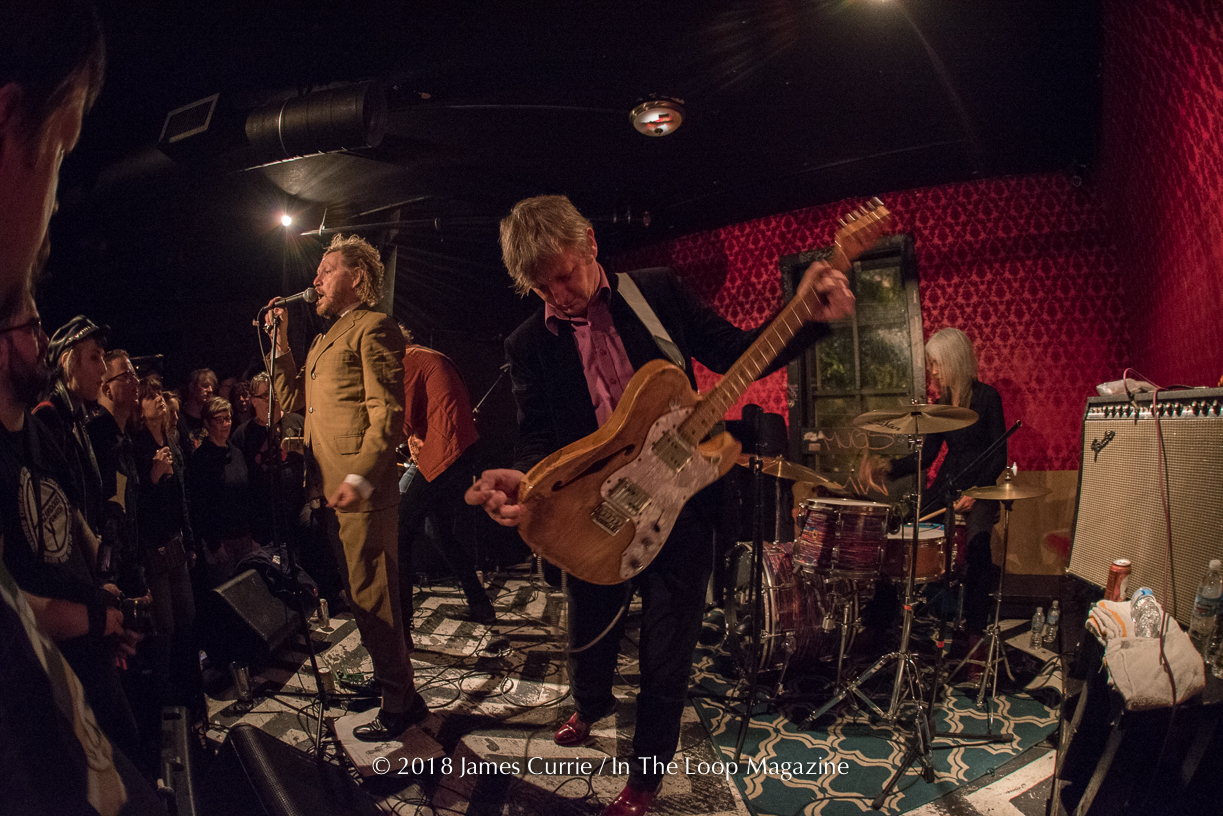 We had love, at the East Room last night as Australian swamp rocker legends The Scientists rolled through town on their first ever U.S. tour. This is not only the first time the band has played the East Room/Chicago/States, but just about anywhere in the last 20 years (minus one off shows here or there). This show was one for the books.

This was a concert I thought I’d never see. It was a band I found out about from a friend in College years ago. He had a cut out bin cassette tape of “Weird Love”. We listened to it so much it was wearing out. I was always on the hunt for more from the band, and since this was pre Spotify / Amazon days, could never find anything. It got to the point we loved this tape so much, I decided to preserve it the best way I could and digitize it and make a CD from it. The band didn’t even have a CD. That got us through for years until we found more from the obscure indie Aussie band.

So now, here they were. The Scientists on tour in the States, with a stop in Chicago. I was a dream gig, but one that left several of us scratching our heads as to why they were playing this club, the East Room, none of us had ever heard of. This should have been a show at the Bottom Lounge or Metro, but hey, we’ll take what we can get. The other odd thing about this event was the time. It was scheduled for a 9PM start time on a Sunday night in the Fall. Nothing seemed to jive with this gig, but we all went.

When we got there, it was raining. Down pouring actually, so after finding parking, we darted in to the unfamiliar club. Once inside, we realized it was an uber hipster joint. And wow were people trying to out-hip themselves. Trucker hats or beanies falling off the head, jean jackets, mustaches and tattoos galore. Normally all OK in moderation, but wow, this must have been Chicago’s Mecca. I’m all for diversity and individuality, but this was all cookie cutters. Not what we were expecting for a band of this age but hey, fans of the Scientists are welcomed fans. We can all get along with a cold PBR just fine.

The night started with a few local bands. We couldn’t figure out where the stage was for sometime as it really wasn’t a stage but more a corner in someone’s living room. Random speakers throughout the upstairs nightclub produced sounds, but not clear as to were from. There was literally no stage lights. No stage monitors. No stage. It was the from corner of a very dark and small room that held about 100 people. The only light hitting the stage was a couple recess ceiling lights and an exit sign over the stage left door.

About midnight, The Scientists finally went on. They entered the room from a balcony stage door entrance that was dripping with water as it was still raining hard outside. Kim Salmon, Boris Sujdovic, Tony Thewlis and Leanne Chock all squeezed through the door and front crowd and got situated with their gear that was a mix of older amps and a rented (or house) drum kit. Thewlis amp was in pretty rough shape as the volume or tone knob was broken off and he had a pair of pliers laying on top of the amp to reach in and make adjustments. But once he was dialed in, look out! That place rocked!

Salmon, in a tan suit with bowtie, greeted the – right up and in his face audience – with a notebook filled with drawings, lyrics and song set lists. Then ripped into, “When Worlds Collide”. Sudjdovic stood in his corner with his puffy hair and low hanging bass churning out the backend. Chock beat the drums like a woman on a mission. All of them keeping cool with still managing to throw out a smile here and there proving they were having fun with it all.

Earlier in the evening before The Scientists went on stage, I had a chance to talk to them all about things. I first spoke with Kim Salmon. I asked him what it was like playing in the states and specifically Chicago. He said, “It was good and that they were looking forward to playing this gig. I asked him if there was any new Scientists music coming out as a result of their reformation and touring. “Yeah, actually there will be something new. In the form of an EP.” Salmon said. I told him my story about how we discovered him in the States and how hard it was to find their music. He continued saying, “We didn’t put out that much music even for us down there, but you found us in a cutout bin, well, (chuckles) I guess that says a lot about us.”

Next I meet with Leanne Chock. She seemed surprised I knew who she was. I told her the same story and that we were big fans of that specific album “Weird Love”. She said, “You know I’m actually on that record.” I said, yes, that’s why we’re here. This was the sound that we knew the most as The Scientists. I asked her what she thought of the tour. She said, “I’m surprised of the turnout of people. I didn’t realize so many knew us here and cared.” I reassured her that we did and we do and that this was something we never thought would happen. She said, “We’ll after you hear us play, I hope you still feel that way.”

The Scientists continued playing until early into the morning. They blistered through 15 songs on the main set list ending with the classics, “Swampland” and “We Had Love” before taking a break and heading back outside to the balcony. After a few minutes, they came back in and played, “Fire Escape” (after literally just coming in off one), “SurvivalsKills” and “Last Night”. But the night didn’t end there. After taking a second time out, they came back and surprised the remaining fans with another two songs, “Teenage Dreamer” and “Shine” before finally calling it a night. These last two songs really rocked and got people pumped. It was like a runner approaching the finish line and putting it all out there for one last ditch effort.

Overall, this show proved worth the wait even with the venue audio visual limitations. For a band in their sixties, who haven’t played together regularly in decades, this was astonishing to witness. They brought that post punk revival / psychedelic tinged rock n roll sound that only they can do. So many bands have sited The Scientists as an influence and after seeing and hearing this, I can understand why.

It’s a shame it took the band so many years to get together and tour again, but glad they did. If you ever get a chance to see them, no matter where and when they are playing, go. You won’t regret it. If they don’t tour again, it will be a crying shame and loss to swamp rock music lovers everywhere. The bands website and store is kind of in disarray but you can find their music as they’ve reissued a couple records. And if that doesn’t work for you, at least we now have technology to give us something. Thanks YouTube and Spotify.

For photos of the show at East Room, click here

For a live video sample of the Scientists at the East Room on the US tour, click here

Setlist: The Scientists live in Chicago at the East Room October 7, 2018